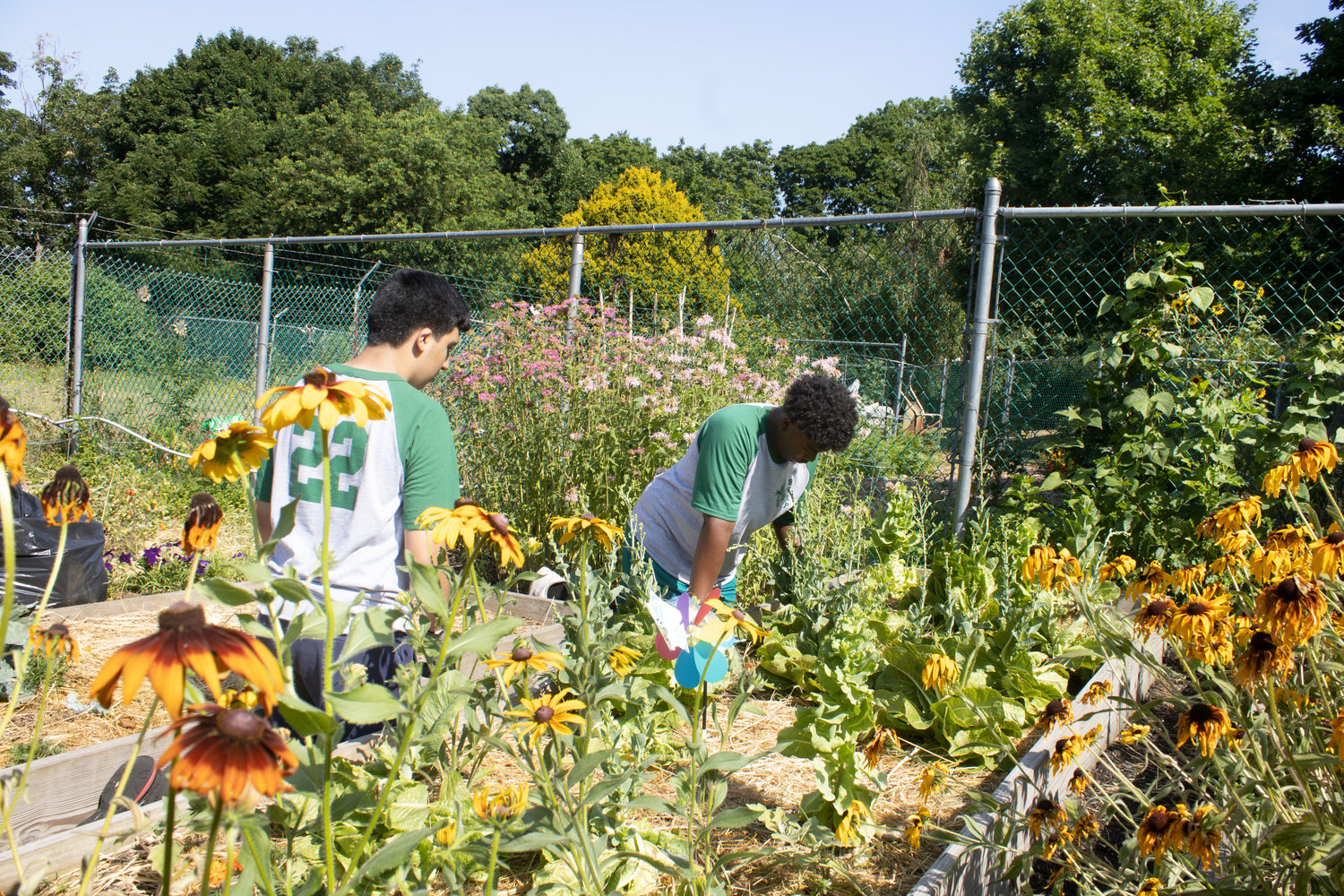 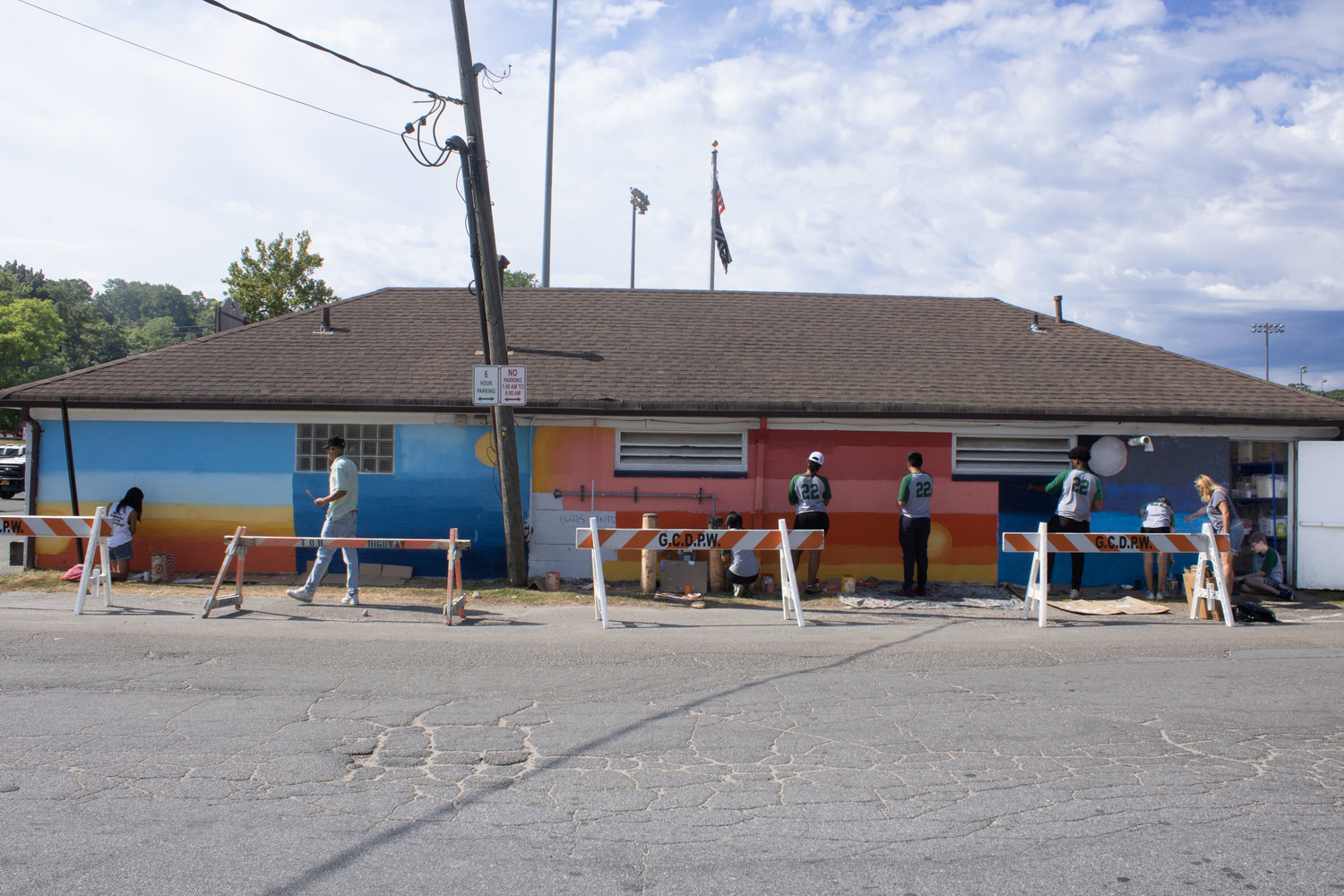 The Youth Bureau’s Green Team worked on a mural at the City Stadium.
Courtesy Jimmy Mejia
Previous Next
By Kepherd Daniel

The Glen Cove Youth Bureau is offering young teenagers, most of whom have never worked before, the opportunity to get first-hand work experience. The program is designed to teach them what they’ll need to have successful careers such as punctuality, teamwork, and community involvement.

The Summer Youth Employment Program started with the Youth Bureau in 1981. The program began as the Green Team, which are groups of teenagers, ages 14 and 15, who start beautification projects throughout the city. They also paint murals throughout the city, work with the city’s museums and schools and maintain the community garden.

The program has since expanded to include internship and employment programs. Internship Program interns are ages 16-18, and many come after participating in the Green Teams. After months of training, which encompasses resume writing, interview techniques, and work etiquette, guest speakers and interns apply for positions offered within Glen Cove Departments, non-profit organizations and local business partnerships, and are able to work in a paid internship position through the summer.

With the lack of opportunities for young high school students to find employment, SYEP offers them the ability to be ready to find a job while they are still in high school and be employment ready for the future.

Among the places within the city where teens can work is at the City Stadium concession stands. Spiro Tsirkas, the executive director of Youth Bureau, and the city’s Recreation Department, has been with the Youth Bureau since 2008.

“The concession stands are an amazing opportunity where kids learn everything from running a business, cleaning, ordering, purchasing, what sells and what doesn't sell, customization, and pricing,” Tsirkas said. “They've had a lot of good opportunities, and the program just continues to give the kids incredible summers and great opportunities.”

“Some of our college kids that come back would like to work here in the city, whether they work at the gatehouses, the beaches or become seasonal laborers with the Parks and Recreation Department, Parks Department, Beautification Commission,” Yonick said. “It's nice in our Glen Cove community to have this kind of relationship with the city and other departments, and allows the kids to really feel a part of their community.”

“It's my first year as a supervisor, but I've been involved with the Youth Bureau for close to seven years,” Aguilar said. “I came back for the summer and Jackie (Yonick) said, ‘I have this opportunity for you to be a supervisor for the program.’ I thought this was another great opportunity to get some type of experience and also work with kids.”

Szymon Frye was 14 when he joined the Youth Bureau's Green Team. Now 21, and attending Saint Anselm College in New Hampshire, he is in his third year as a supervisor.

“You have a little bit of time off being a college student, so it's good to come back,” Frye said. ‘Jackie has always helped me out and the youth bureau has been great to me. Through them, I've been able to work everywhere. I've worked at the ballpark, I've worked at the mayor's office and I worked on her campaign all through the Summer Youth Employment Program.”

The Youth Bureau has a variety of other programs for children too, from their Drop-In Center to after-school programs. The advantages of the Green Team and the employment program is it allows for teenager at the high school level to build their resumes, learn labor skills and have a place to be while being paid. Tsirkas believes it’s an experience they will always remember.

“Through this program, kids realize it's not only about the money, but it's also about what you can learn, and what you can view and it leads to career paths,” he said.