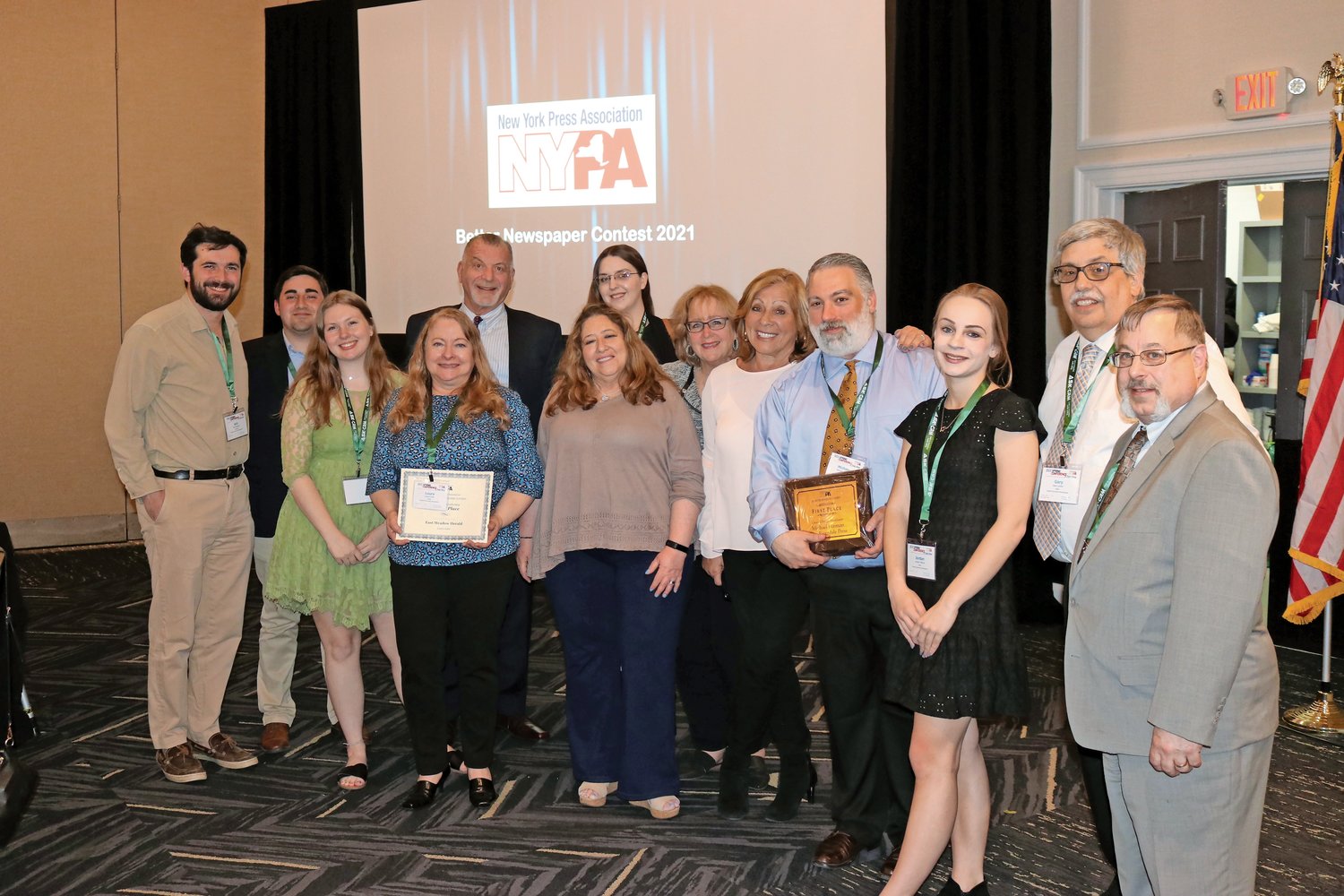 It was a big showing for Herald Community Newspapers at the New York Press Association spring conference last weekend in Saratoga Springs, with the group from Richner Communications winning 17 state awards, including top honors for in-depth reporting, column writing and spot news.

The team of Nakeem Grant, Scott Brinton, Peter Belfiore, Sue Grieco and Jim Bernstein won the Thomas G. Butson Award for the Malverne/West Hempstead Herald following an April 2021 shooting at a West Hempstead Stop & Shop that killed one person, and injured two others.

“Incredible local coverage of a local trauma,” judges from the Nebraska Press Association shared. “The spectrum of pieces — hard news, editorial, column, etc. — to widen the context and learning from this event and its impact on the community was exemplary.”

The team also earned top honors for spot news for their coverage of the shooting, that ultimately led to murder charges for Gabriel DeWitt Wilson, who reportedly worked as a cart collector at the supermarket.

Senior editor Laura Lane finished as a runner-up in the in-depth news category as well for her coverage of speed enforcement on the roads around schools for the East Meadow Herald.

“Really solid reporting on a local issue that may not have seemed particularly newsworthy, but after research, was demonstrated to be a looming safety issue that — unchecked — could have had tragic consequences,” the judges said. “And Ms. Lane’s reporting had an actual impact, with changes to speed zone and enforcement.”

That coverage also earned Lane a runner-up spot for community leadership behind a team of reporters from The Post-Standard in Syracuse.

Brinton also won first place for his column writing that would appear on the Herald opinion pages.

“I am immensely proud of our team for once again being recognized for the tremendous work they do serving our communities week in and week out,” said Stuart Richner, publisher of Herald Community Newspapers. “Never has local journalism been more important than during the past two years. Throughout the entire pandemic, our team of essential workers has been in the communities telling the stories of our neighbors., businesses and institutions.

“Our company is proudly family-owned, which allows us to impartially report the facts. From critical health information and school updates, to celebrations of life’s milestones and more, we’ve got you covered.”

Former photo editor Christina Daly was a runner-up for the state’s Photographer of the Year behind Erica Miller from The Daily Gazette in Schenectady. Judges commended her on a “nice collection of excellent work” where Daly “caught more than the action” with her photographs.

Former reporters Kate Nalepinski, Brian Stieglitz and Stephanie Banat were recognized for their education coverage inside the pages of the Wantagh Herald.

Judges praised them for the “balance of hard news and features related to the schools, keeping people informed on mask and vaccine protocols, while also showcasing new programs and providing that human interest piece that is so vital.”

Photographer Brian Ballweg was awarded runner-up status for his sports action photos that appeared in the Lynbrook/East Rockaway Herald, after prompting one judge to “almost feel the pain” in an athletic play.

Mona Waitzman was a runner-up for best small space ad.

“It takes a great team, from every department, to bring home the awards we have this weekend,” said Rhonda Glickman, vice president of sales for Herald Community Newspapers. “I am so proud to be a part of this team.”

Other runner-up wins included:
Coverage of religion for Andrew Garcia and Jordan Vallone for the Merrick Herald with stories described by judges as “very strongly worded and political” filled with “lots of good quotes.”

Best obituaries for Jeffrey Bessen, primarily on his remembrance of Jim Steinman. “The lede made me want to keep reading,” according to one judge. “The more I read, the more I wanted to read.”

Best editorials for Brinton in the Merrick Herald, praised for putting “faces” on editorials. “Each editorial led off with a narrative lead paragraph about someone affected, which helped readers relate to the issue.”

Daly was recognized for her feature photo in the East Meadow Herald, where readers are drawn in, forcing them to “look at it longer and longer.”

The Heralds also received honorable mentions for a news story from Andrew Garcia, and for best special section-advertising for Negrin’s graduation issue that appeared in the Rockville Centre Herald.

The Riverdale Press in the Bronx earned 11 awards, including top honors for general excellence, overall design, editorial page and newsprint special sections. That paper was led up until earlier this year by Michael Hinman, who is now executive editor of Herald Community Newspapers.

Overall, the publications from Herald Community Newspapers won 28 state awards, allowing it to finish in the top three newspaper groups and chains in New York.

In all, more than 130 newspapers participated in this year’s competition, submitting 2,481 entries in 67 categories.