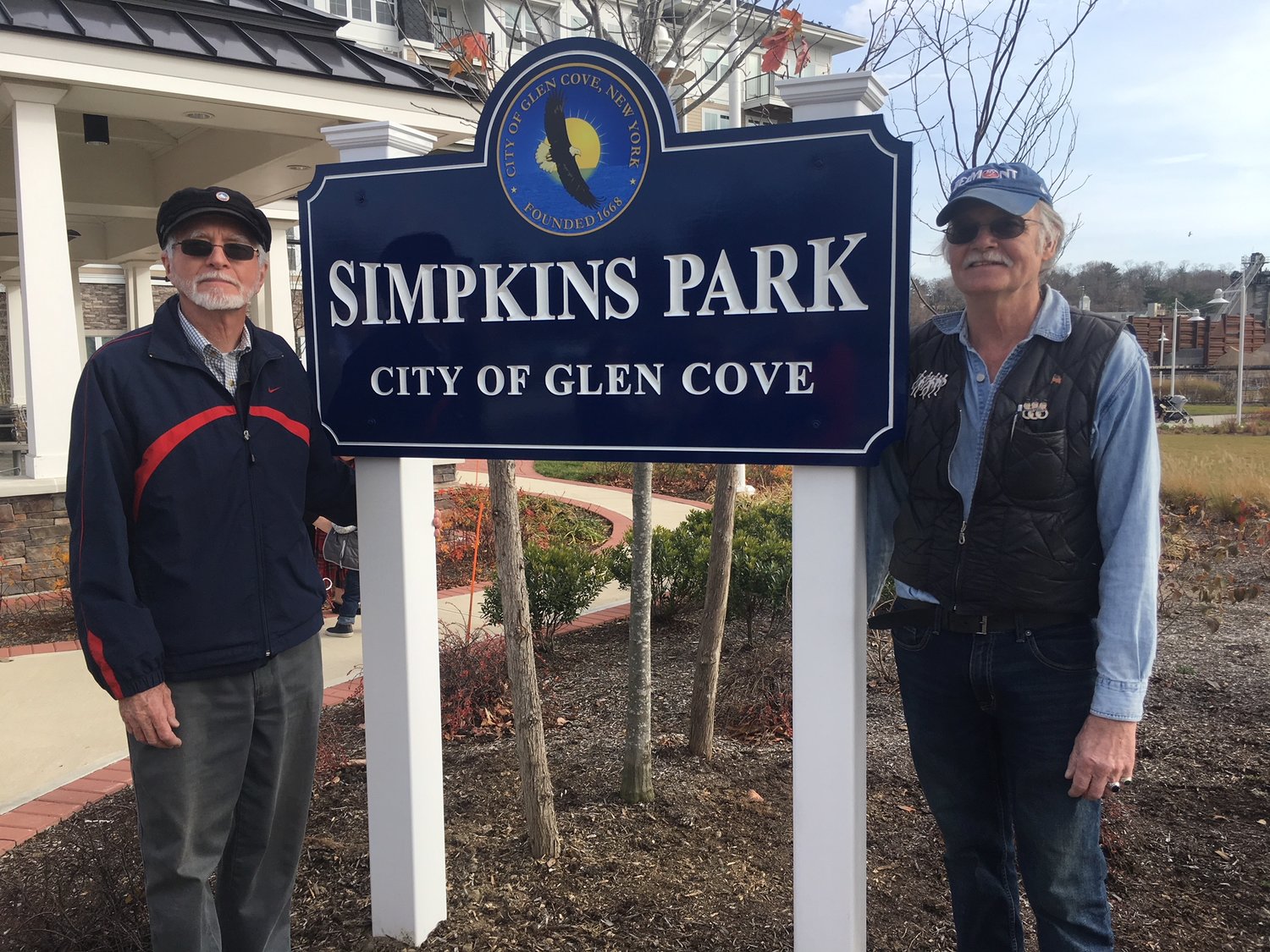 Herb and Dave Schierhorst, of Glen Cove and Sea Cliff, respectively, are descendants of Nicholas Simkins, whose name will be corrected on the sign that was unveiled on Dec. 16.
Jill Nossa/Herald 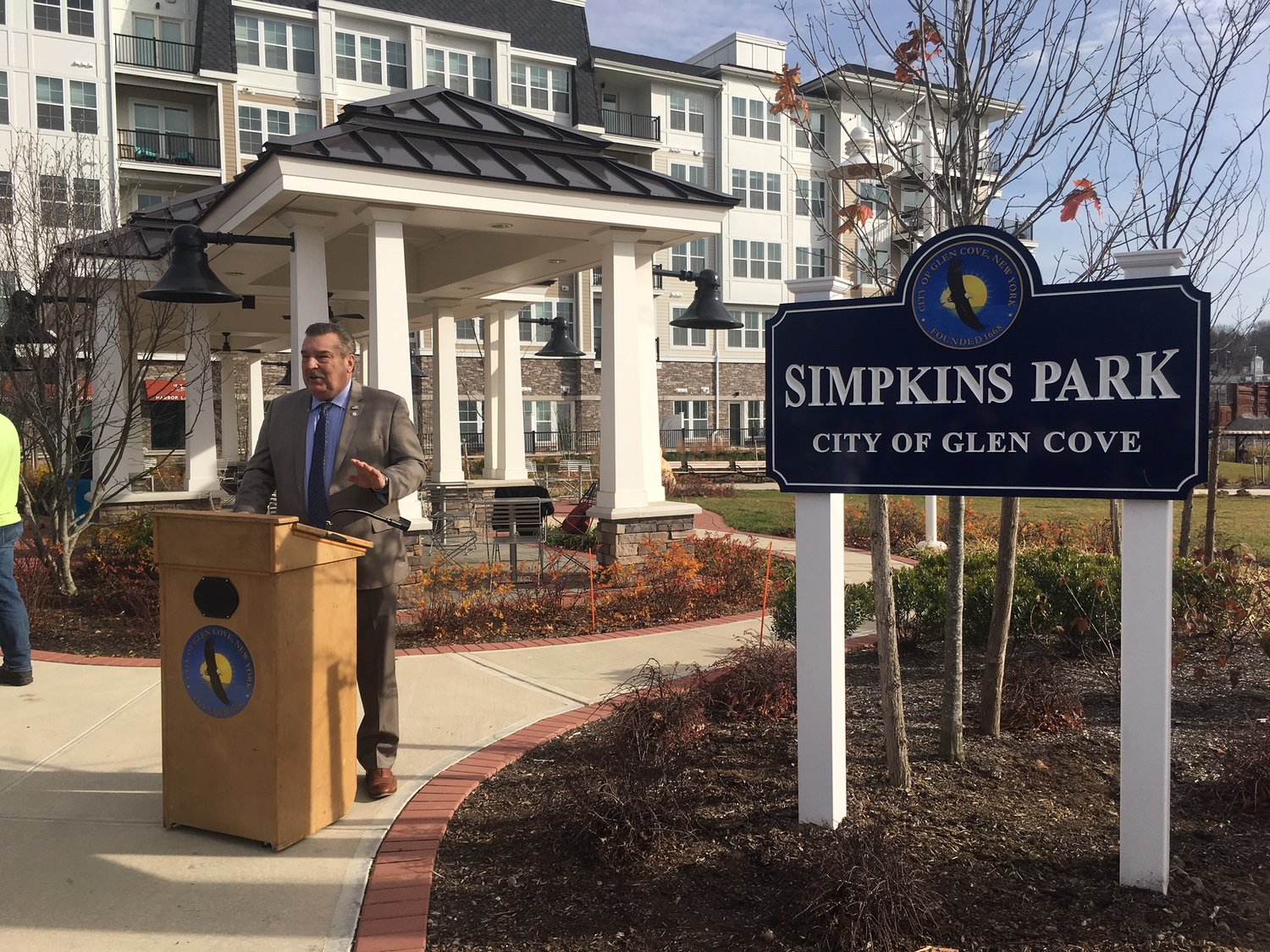 Mayor Tim Tenke spoke at the dedication of Simkins Park, where the new sign was unveiled. Tenke noted that there had been confusion over the spelling of the name, and said the sign would be changed to correct it.
Jill Nossa/Herald
Previous Next
By Jill Nossa

It’s taken more than 350 years, but Nicholas Simkins, one of the founders of Glen Cove, has finally been officially recognized. On Dec. 16, a new park at the RXR Garvies Point waterfront development was named Simkins Park in his honor.

“Today is an important day for Glen Cove,” said Mayor Tim Tenke, who went on to tell the story of the city’s founding.

On May 24, 1668, Joseph Carpenter, from Warwick, in the colony of Rhode Island, purchased about 2,000 acres in the Landing area from the Matinecock tribe. His intention was to start a lumber mill that would supply the lumber to build New York City, Tenke said, and Carpenter soon partnered with the Coles brothers — Nathaniel, Daniel and Robert — and Nicholas Simkins. At the time, the area was called Musketa Cove, a Matinecock word meaning the land of rushes and high grass.

The lumber mill, at the head of Glen Cove Creek, was very successful, and the partners went on to build a gristmill as well, Tenke said. The area was chosen because it was surrounded by water on three sides, and at high tide they could easily float the wood out of the creek and over to Manhattan.

“The Coles and Carpenters are very well known in Glen Cove,” Tenke said, noting Carpenter Street and Carpenter Avenue, Coles Street and the Coles School, “but there’s not a whole lot said about Nicholas Simkins.”

The idea of a park dedication, Tenke said, came from Dave Nieri, the city historian, who wanted to officially recognize Simkins in some way.

“This is something I’ve been thinking about since I did a lot of research in 2018 for the 350th anniversary of the founding of Glen Cove,” Nieri said. “Everybody knows the Coles and the Carpenters … and Simkins appears nowhere, yet he was one of the equal partners in the establishment of Musketa Cove.”

According to Nieri, Simkins was the oldest of the founders, and lived to be 95 or 96, outlasting them all. He was also crucial to the area’s development. “He was a wheeler-dealer,” Nieri said. “I went through the Town of Oyster Bay records, and his name appears 170 times, all on deeds.”

Simkins, Nieri said, bought and sold parcels of land from Oyster Bay to Great Neck. “He was the real estate developer at that time, and I think most of his partners were the farmers and the lumber mill people,” Nieri said. “I’m glad that we can finally give equal representation to one of our founders.”

The location of the new park is also significant. According to a map created by descendants of the Coles that shows the original properties from the 1668 purchase, Simkins’s home was in the area of the new park, which is why city officials chose that location for the dedication, Nieri said.

“I think today is an important today for RXR and the City of Glen Cove and the history,” Graziose said. “While RXR has taken what was and brought it to what is, it’s very important that we remember the history of the people that helped us make the history.”

The new sign for the park has the name “Simpkins.” When it was unveiled, Tenke explained that there had been debate after it was created about how the name was spelled, and it was determined that the honoree signed his name “Simkins,” so the sign will be corrected.

According to Nieri, finding direct descendants of Simkins has been difficult. He had four daughters: one married a Coles and one married a Carpenter, but his daughter Mary married Samuel Tilley, and they settled in Locust Valley. Three of their descendants still live locally, and brothers Herb Schierhorst, 81, of Glen Cove, and Dave Schierhorst, 70, of Sea Cliff, attended the park dedication. Their sister, Janet Donohue, lives in Glen Head.

Herb Schierhorst, who is president of the Locust Valley Historical Society, said he learned about his family’s history later in life, and that it can be traced on their mother’s side of the family.

“I love history,” he said. “It imparts so much of what we’ve done into where we’re going.”