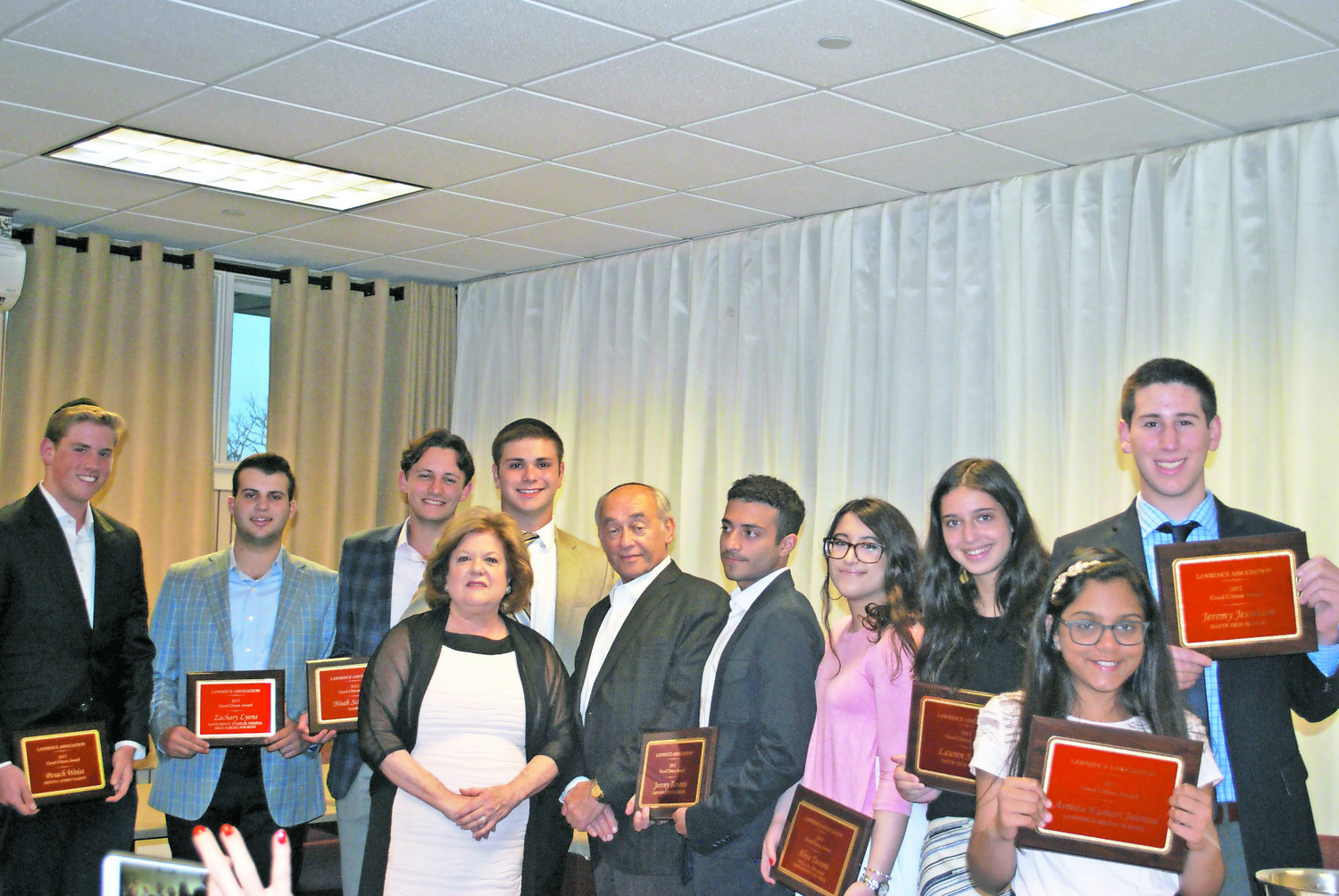 Lawrence Village Administrator Ron Goldman, a past president of the Lawrence Association, kibitzed that Paris Popack is “not a public speaker, she is a public doer,” and that is why she and other residents are working to revive the dormant organization that functions as the village’s civic group.

We have to find a way to unite for the greater good of our community, and that’s through the organization.”
Paris Popack, Lawrence resident
By Jeff Bessen

Lawrence Village Administrator Ron Goldman, a past president of the Lawrence Association, kibitzed that Paris Popack is “not a public speaker, she is a public doer,” and that is why she and other residents are working to revive the dormant organization that functions as the village’s civic group.

The 90-year-old group serves as the liaison between residents and the village government. Monthly meetings between September and June have included candidate forums and issue-oriented gatherings.

The organization also annually presents citizenship awards to students from schools in the Five Towns and its Crowell Baker Award to a person for their extraordinary volunteer contributions. Baker, who died in 1999, was a village trustee and association president.

Mayor Alex Edelman, a dues-paying member, said he was supportive of the association being revitalized. Until now, no one has stepped forward to take a leadership role since the previous president, Sharon Douglas, moved to New York City last year.

“It’s extremely important to have another voice beside the village management,” Edelman said. “An independent voice that will dictate some kind of protection for the residents of Lawrence, express their views and bring them to the board.”

Popack, 53, who has lived in Lawrence for 22 years, collaborated with longtime Lawrence Association member, Jackie Handel, another past president, and two other village residents, Gladys Rothstein and Joan Small, on the PLAY for P.I.N.K. (Prevention, Immediate Diagnosis, New technology, Knowledge) summer fundraiser at the Lawrence Yacht & Country Club.

Their work quadrupled the money donated to battle breast cancer and raise awareness of the disease from $9,000 in 2016 to $36,000 last year to benefit the Breast Cancer Research Foundation. Popack also credited club pros Peter Procops (golf) and Chris Morales (tennis) for the event’s success.

“We combined our efforts on tennis and golf, and had many more people involved,” Small said. “Paris is just a dynamo,” she never stops and always has new and exciting ideas and is doing it in the most pleasant, enthusiastic way.”

Popack, who grew up in Oregon and came east after entering a modeling contest held by the famous Ford Models agency, believes in civic involvement and giving back to your community. She met her husband, Joseph, and remained in New York. They have four daughters ranging in age from 9 to 21.

The self-described professional volunteer plans all of the Chabad of the Five Towns’ events (she has been a member for about 20 years), and served as a producer and associate director with the E. M. Basch Drama Productions for seven years at the Shulamith School for Girls.

“You absolutely have to get involved,” Popack said. “This is how Lawrence will keep its heart and soul. It feeds my heart and soul to participate; it’s in my nature to be involved. I have Lawrence pride, and I want everyone to have it. We have to find a way to unite for the greater good of our community, and that’s through the organization.”

The village is 4.3-square-miles in size and has 6,769 residents as of July 2017 (U.S. Census). Popack said it has local concerns that touch other Five Towns communities such as the building of a new library, the school district budget, the possible Woodmere Club development and sanitation.

The Lawrence Association is run by a president, several vice presidents, a treasurer, secretary and corresponding secretary. The monthly meetings are traditionally held on Wednesdays at 8 p.m. at the Lawrence Yacht & Club. Membership dues for village residents is $25, and has been for many years. A non-resident membership is being considered.

Ed Gottlieb, a past association president (1998-2002), referenced Popack’s work with PLAY For P.I.N.K. and revitalizing the Women’s Tennis Club and its club championship as examples of her ability to lead and succeed.

“She was a phenomenal organizer, certainly personable, and she has a pleasant manner,” he said. “It’s very difficult to organize people, and she did it masterfully. And that is the same skill set that could help her be successful with the Lawrence Association.”

A meeting to discuss reviving the civic organization and the issues surrounding the Woodmere Club with Mario Joseph from the Five Towns Civic Association is set for Wednesday, Feb. 21, at 8 p.m., at the club, at 101 Causeway in Lawrence.