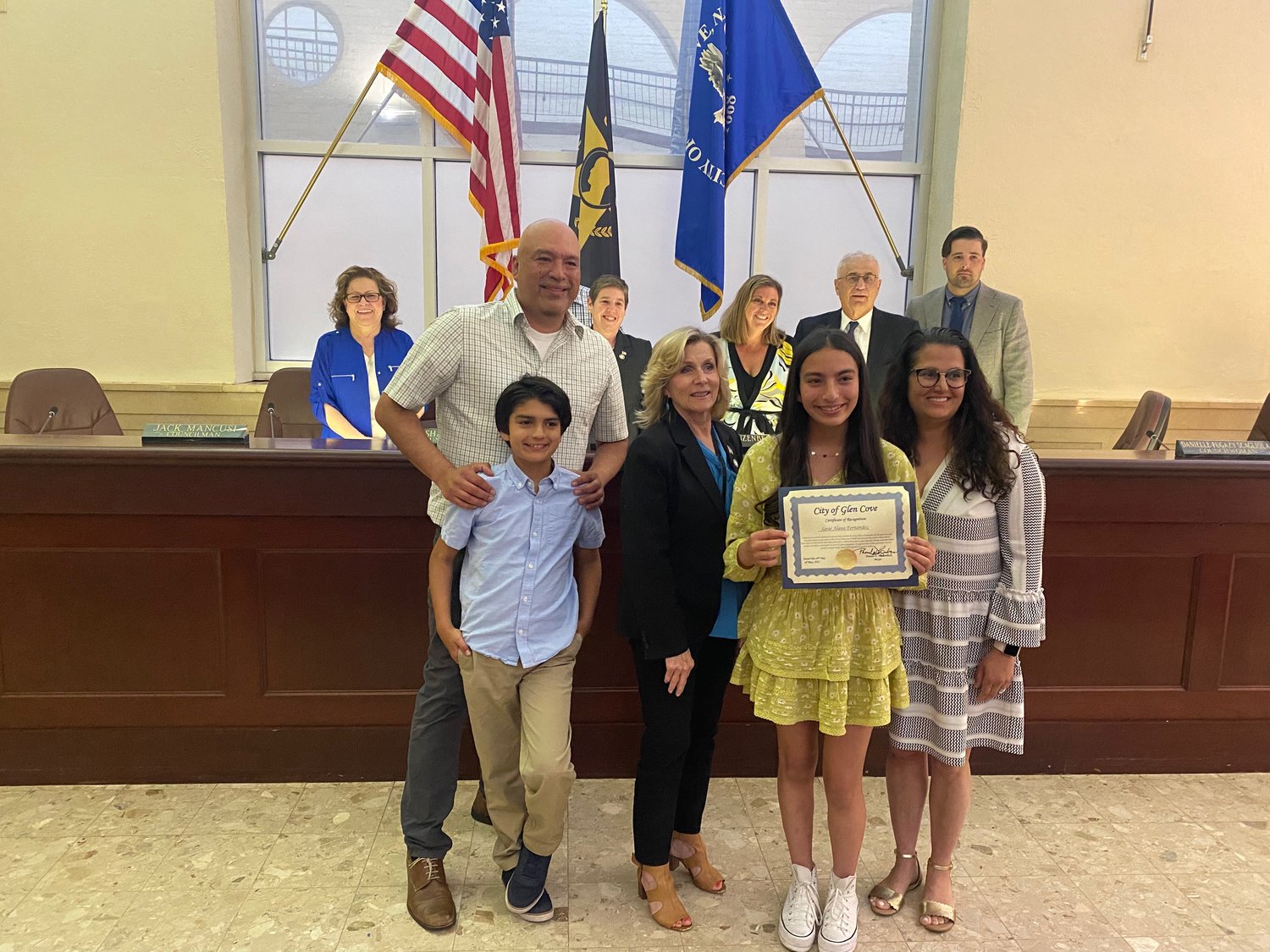 A seventh-grader from Robert M. Finley Middle School decided to give back to the Glen Cove Youth Services and Recreation Department for her bat mitzvah project. Sarai Fernandez, 13, raised $1,800 to help underprivileged children take part in the city’s programs.

“We [are] extremely proud and impressed with Sarai’s giving attitude,” the department’s director, Spiro Tsirkas, said, “and just very proud for her parents and for her family that they were able to pull this off … and just [be] so selfless.”

Sarai’s initial goal was to raise $1,000, but with the help of teachers, families, friends and her fellow congregants at Congregation Tifereth Israel in Glen Cove, she raised an additional $800. “We just continued to spread the word,” said Sarai’s mother, Bianca Marcedo-Fernandez,” and it ended up being more successful than we had anticipated.”

“Something was telling me that she would probably do more than what she said,” Tsirkas said. “And she did. So, this is a great help.”

Tsirkas added that with the money raised by Sarai, his department will be able to help at least 10 children take part in an activity of their choice.

Around September 2021, Sarai was tasked by her synagogue to think of a fundraising project to prepare for her bat mitzvah, the Jewish coming-of-age ceremony for girls. She decided to help the city’s youth programs, she said, because she has been active in them almost every year, playing on soccer, softball, basketball and volleyball teams. She wanted to help other children have the same experience she did.

“Growing up, I’ve made new friendships, gotten better as a player, [and] met new people, which was a really nice thing to do,” Sarai said. “I felt like … I got that experience, and I felt that joy through it, [and] I want the other kids to feel the same way that don’t always have that same opportunity.”

Marcedo-Fernandez said her daughter’s generosity of spirit didn’t surprise her. “She’s always been this way,” she said. “Like very generous and mindful of helping others and helping those in need.”

Another contributing factor when she was formulating the idea, Sarai said, was the fact that both of her parents are educators. Marcedo-Fernandez is a third-, fourth- and fifth-grade English Language Learners teacher at Landing Elementary School, and her father, Eric Fernandez, is a phys. ed. teacher in New York City. Sarai said she knew that not every child had the opportunities she did.

“I know that many kids aren’t as fortunate as I am,” she said. “So I was trying to think of what’s something that relates to me [in] my everyday life.”

Sarai had until her bat mitzvah on April 30 to raise the money. She started by having an essay published in CTI’s newsletter to make members aware of what she would be doing. Then, for the festival of Purim on March 27, she had a food stall set up for a fundraiser, with the help of family and friends. “Families donated,” she said, “and they were very generous and kind.”

To further her cause, she spoke with the principal of Finley Middle School, Nelson Iocolano, about reaching out to administrators who might help donate. “He also supported it, and helped spread the word,” Marcedo-Fernandez said of Iocolano.

Sarai created fliers to put in each teacher’s mailbox at school. She said she didn’t reach out to her classmates for donations to avoid taking money from children she was trying to help.

At the May 24 Glen Cove City Council meeting, Sarai was presented with a citation by Mayor Pamela Panzenbeck for her generosity.

“It was more of like a community thing, even though people thought it was like my project,” Sarai said. “I don’t want to really take all the credit, because everybody else in the community helped out a lot.”