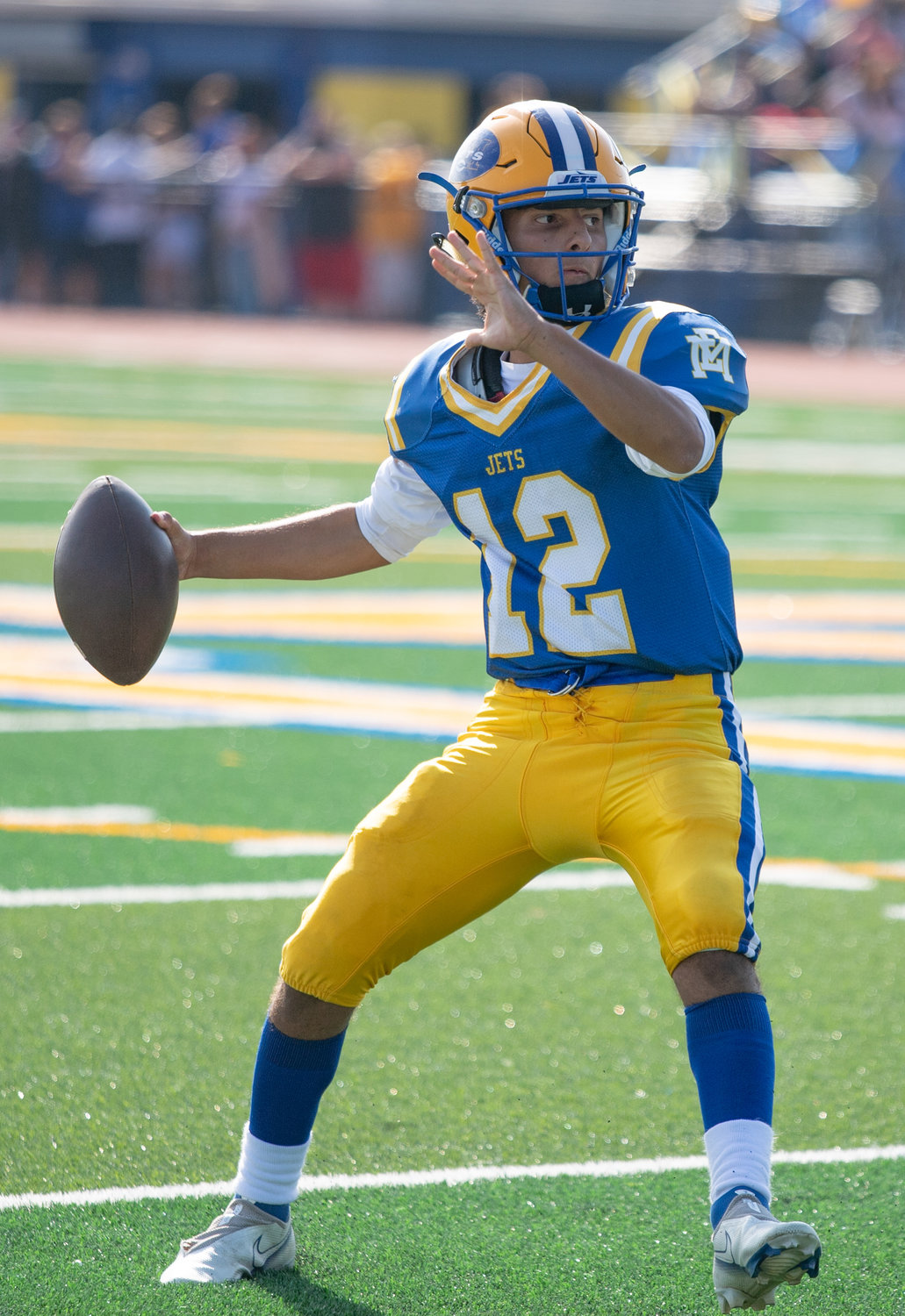 A painful homecoming defeat has East Meadow on the fence to qualify for the Nassau Conference I football playoffs.
Port Washington overcame a pair of 20-point deficits last Saturday to stun the Jets and their spirited crowd, 30-28, on the strength of three long touchdowns. Alex Vivona capped the comeback for the Vikings with a 70-yard rushing score off a reverse with 48 seconds remaining.
“It’s an absolute heartbreaker,” East Meadow head coach Frank Baglivo said. “We were dominant for the first two-and-a-half quarters. This is why we appreciate winning so much. Because losing a game like this is horrible.”
Bottled up by East Meadow’s defense in the first half, Port Washington standout Henry Haberman had a huge say in the outcome. He scored on a 42-yard touchdown run in the third quarter to cut into the Jets’ 28-8 lead. Then in the fourth, he caught a 28-yard touchdown pass from Matt Freeman on fourth-and-5 to make it a one-possession game.
The Jets (3-3) led 28-24 and were driving late in the fourth but couldn’t convert a potential game-sealing fourth-and-7 gadget play pass from the Vikings’ 30. “We forced them to burn all of their timeouts and went for the win because we were out of field-goal range and didn’t want to punt from the 30,” Baglivo said. “What it came down to was, they hit on their trick play and we didn’t.”


East Meadow, which likely needs to win one of its final two games to finish in the top 8 and make the playoffs, led 20-0 late in the second quarter as junior Brian Terino sandwiched touchdown runs of 23 and 19 yards between a 33-yard touchdown strike from senior quarterback Patrick Spinola to senior Shane McIntyre.
Port Washington got on the board on the final play of the opening half when Freeman hit Jett Reiter on a 4-yard scoring toss and ran in the two-point conversion to make it 20-8.
“The kids were mad about letting up the touchdown, but they were still confident and eager to get back out there,” Baglivo said. “We scored first in the second half, but credit to them they never stopped fighting.”
Spinola’s 27-yard touchdown run and two-point run upped East Meadow’s lead to 28-8 before the Vikings scored 22 unanswered. “Our motto all week was assignment football, and for three of the biggest plays of the game we missed our assignments,” Baglivo said. “We have to turn the page and focus on what’s in front of us.”
The Jets have a tall task this Friday evening at Oceanside, which features reigning Thorp Award winner Charlie McKee at quarterback. They close the regular season Oct. 30 at Uniondale. “We probably need to finish 4-4 to get into the playoffs,” Baglivo said.
Behind Spinola, leading rusher Brian Surless, and a linebacker group led by seniors Surless, Joe Abitabile and Jake Barker, East Meadow secured wins over Westbury, Hicksville and Plainview. Surless had 175 yards rushing and a touchdown against Plainview.