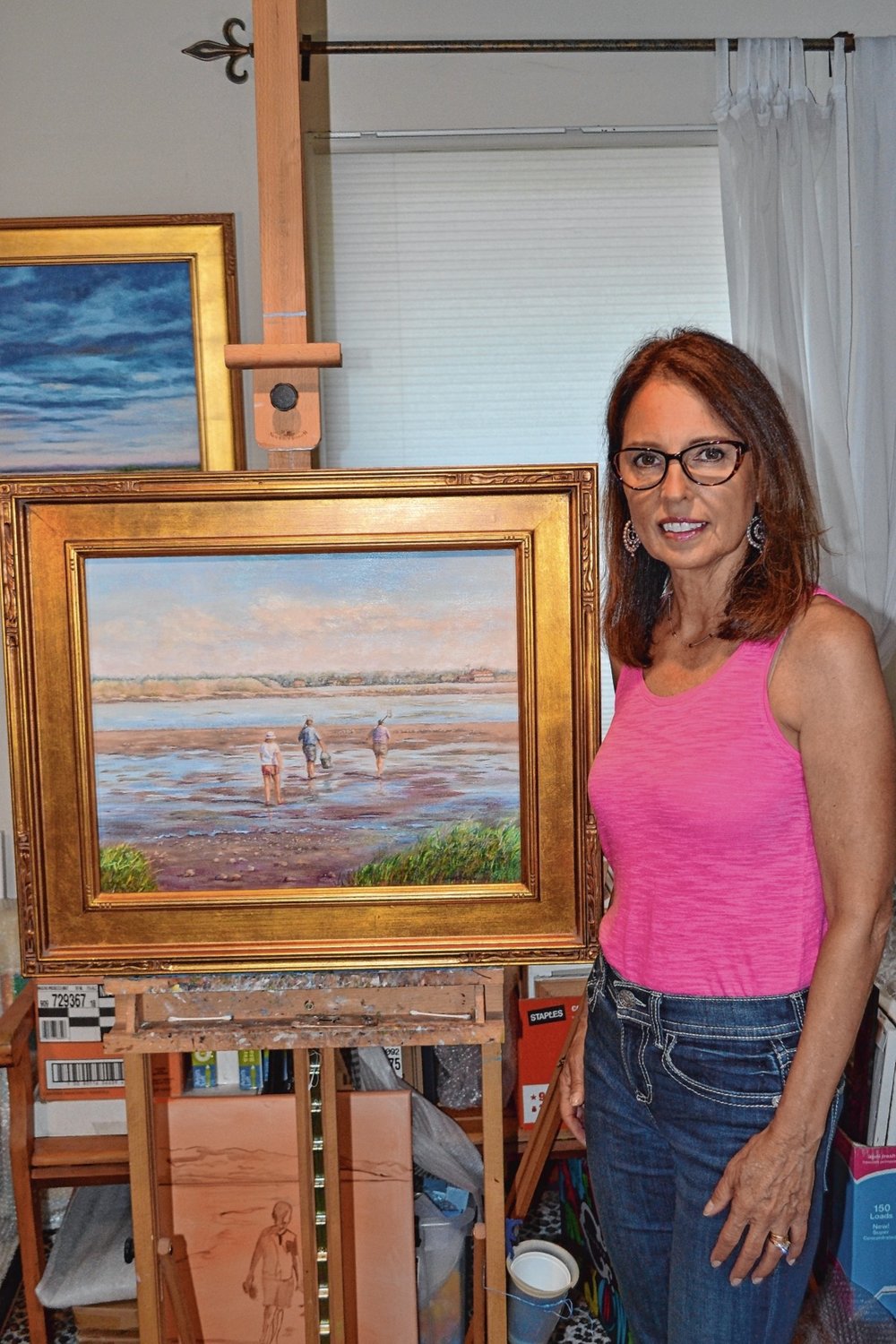 Ilike clouds, I like water, I love the way the sun moves over and shadows are cast, it’s just amazing.”
Susanne Corbelletta, featured artist
By Will Sheeline

In her long career, Susanne Corbelletta has painted in many mediums, from still lifes to portraits and even action shots of the Coast Guard. Now, 15 of her landscape pieces will be on display at the Sea Cliff Village Library in one of the Arts Council’s bi-monthly art exhibitions.
Corbelletta was born in the Bronx, moving to Glen Cove with her parents in 1971. After moving to Glen Head with her husband in 1996. She studied painting at the Stevenson Academy of Traditional Painting in Sea Cliff from 2000-2007.
The academy was founded by Harold Stevenson, a protégé and friend of the famous American artist Norman Rockwell. After he died in 1985, his wife Alma Gallanos Stevenson took over the school, and it was under her that Corbelletta learned how to paint.
“That school touched a lot of people’s lives. We were taught the classical way of drawing and painting, and I hadn’t gone to school before,” Corbelletta said. “I went to that school, and I just learned so much from Alma.”
Corbelletta’s favorite types of pieces to paint, she said, are landscapes, working primarily in oils, although she does also sketch with charcoal. Her pieces mainly focus on the beach and beautiful spots on Long Island, and her works have been featured in galleries and shows across the country, including the National Gallery in New York.


“I favor landscapes, I love them,” Corbelletta explained. “I like clouds, I like water, I love the way the sun moves over and shadows are cast, it’s just amazing.”
Although landscapes may be her favorite work, Corbelletta is most proud of her work as a Coast Guard artist. The Coast Guard, and every other branch of the military, have an art program in which artists volunteer their time to capture the lives and experiences of its members.
The program has been running for 35 years during which it has collected nearly 2,000 works of art from various artists. Corbelletta has painted seven pieces currently in the Coast Guard’s Permanent Collection, most often based on photos sent to her by the Coast Guard.
She has been honored by the Coast Guard several times throughout her career for her efforts painting the stories of its servicemen and women. In 2019 she was honored with a Public Service Commendation by Admiral Karl L. Schultz, commandant of the Coast Guard.
“Years ago, before there was photography they had artists like us documenting history, painting the battles, painting military actions, so we’re continuing that tradition,” Corbelletta said. “I’m really proud of this, because I really feel like I’m leaving something behind, like a legacy.”
Corbelletta has 15 pieces currently hanging up in the Sea Cliff Village Library’s, predominately land
Report an inappropriate comment