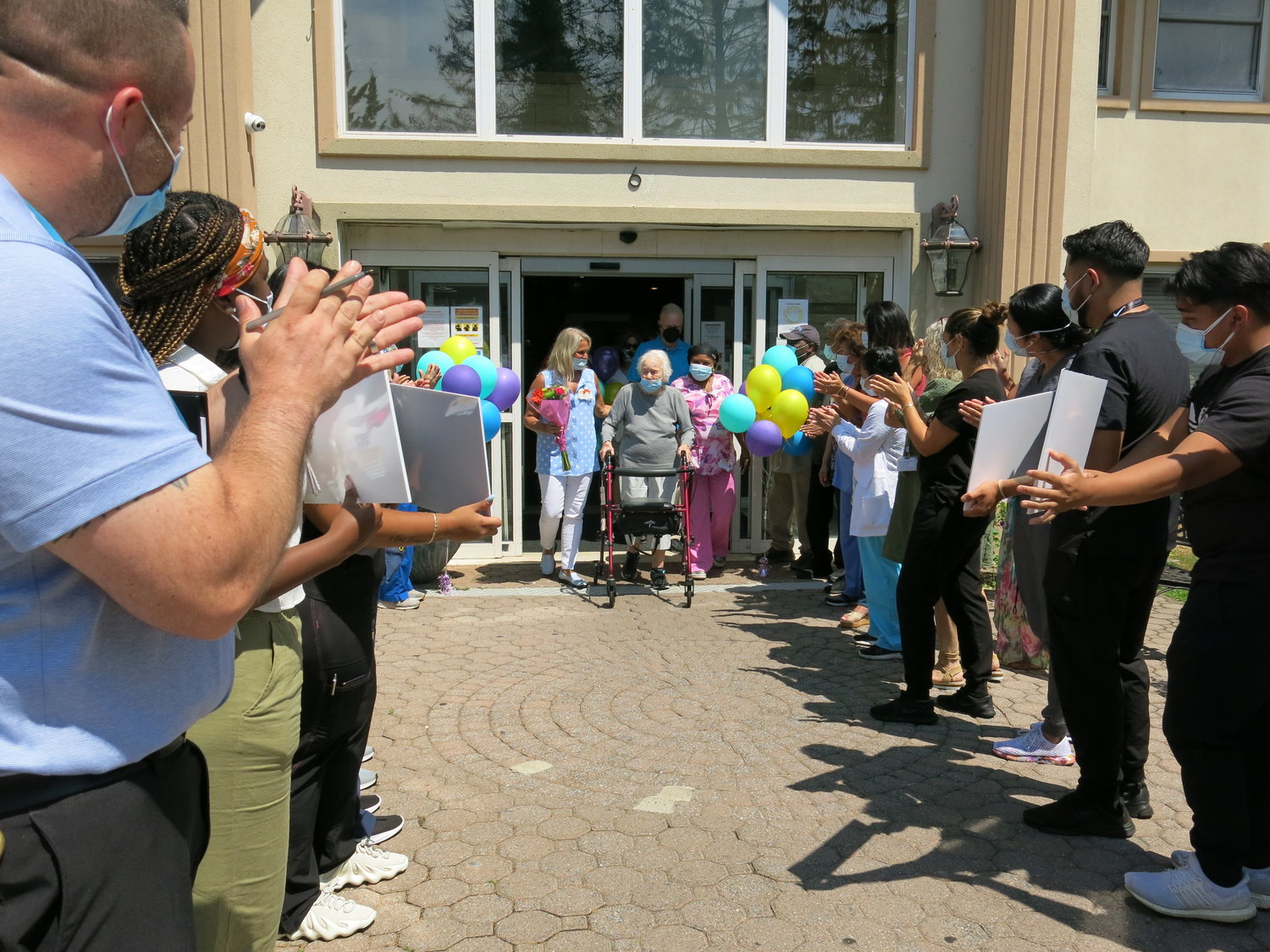 Doctors, therapists and staff lined up to celebrate Nancy Casale, 95, as she left Glen Cove Center for Nursing and Rehabilitation on July 15. She beat Covid and overcame post-Covid symptoms.
Laura Lane/Herald 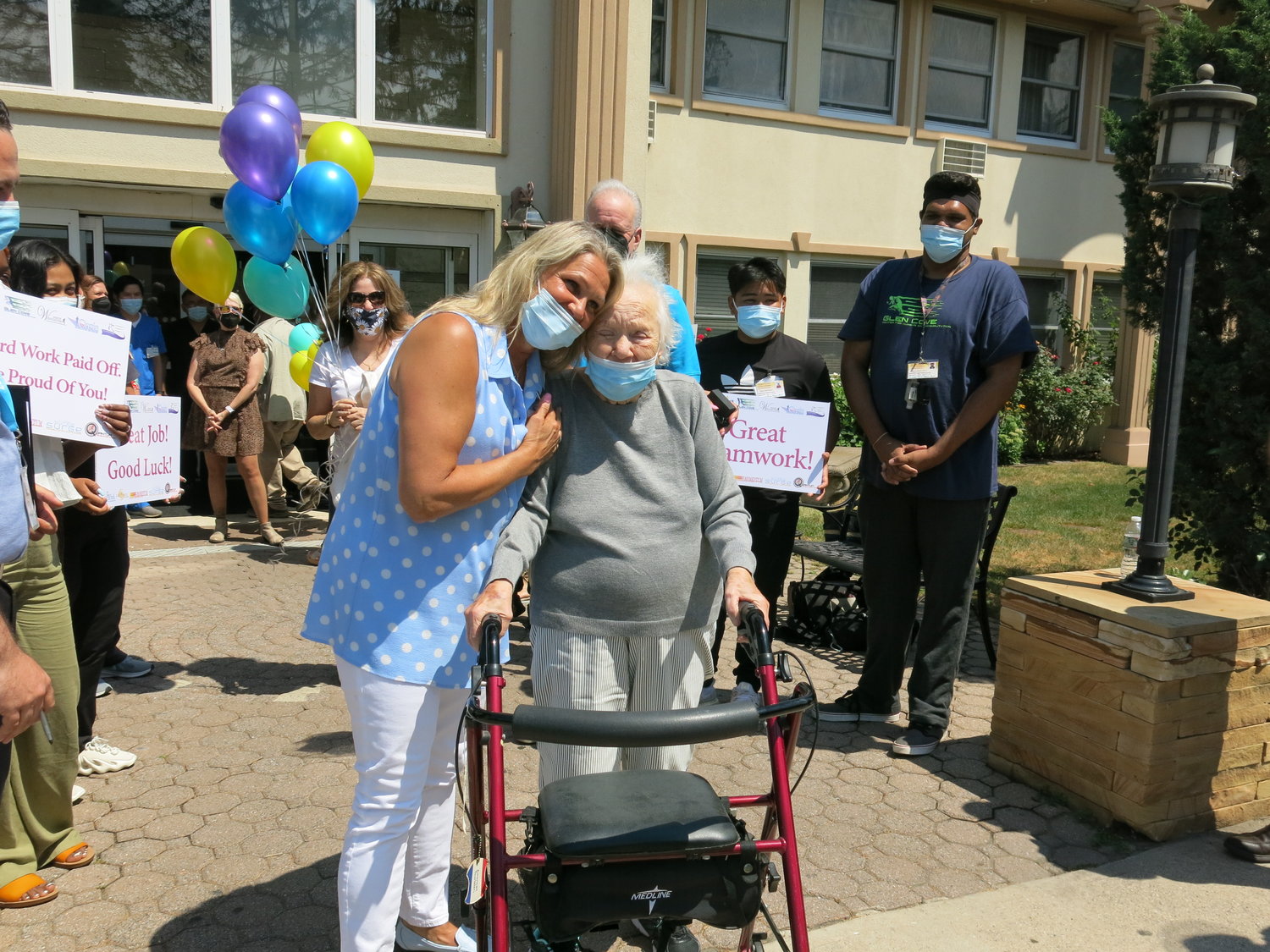 Lynda Torel, the director of cardiopulmonary rehabilitation at the center, worked closely with Nancy Casale to help her recover from her post Covid symptoms.
Laura Lane/Herald 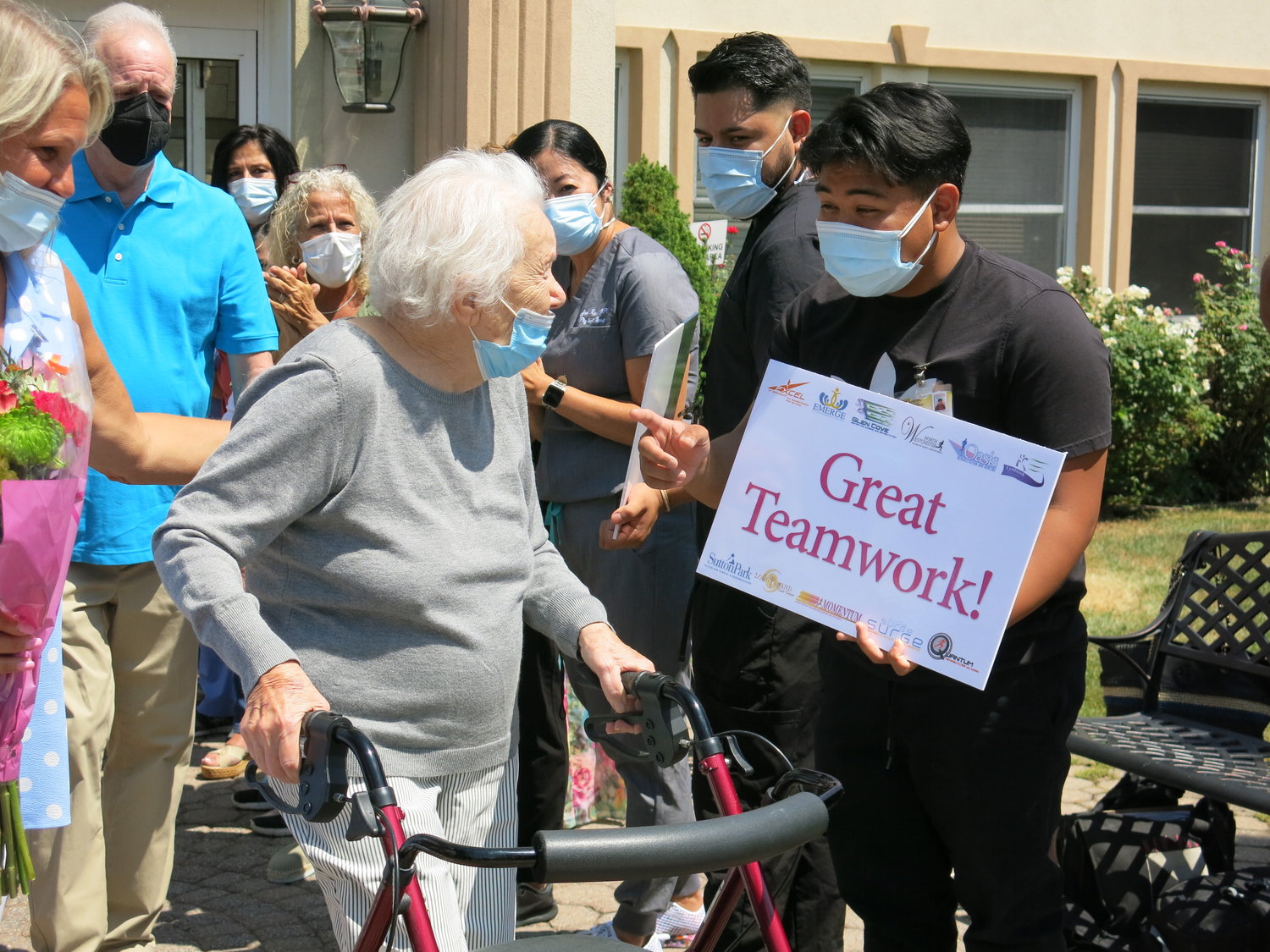 One of the therapists from the rehab center congratulated Casale on her commitment to getting better.
Laura Lane/Herald
Previous Next

Mom is a nice person, compassionate. Every person they hooked mom up with said she’s better than medicine.”
Frank Casale, son, Nancy Casale
By Laura Lane

Nancy Casale was in a wheelchair when she first entered Glen Cove Center for Nursing and Rehabilitation in April 2022, and she wore an oxygen mask too. When she left the facility on July 15, she walked out, smiling broadly, clearly enjoying the cheers and applause from the therapists, doctors and staff who lined the walkway holding signs that celebrated the 95-year-old.
Lisa Penziner, the director of special projects for the rehab center, said the cardiopulmonary rehabilitation program there often helps patients with complex issues, like Nancy had.
The celebratory atmosphere outside the center, that included balloons, signs of support and applause from the staff is given to patients who overcome complicated medical conditions.
“When we get a person with a complicated case, we like to make a big deal when they leave,” Penziner said. “The fact that Nancy is walking out of here is such a positive thing.”
Casale, who lives in Wantagh, beat Covid and the post-coronavirus symptom which had affected her pulmonary system. Recovering had been long and hard, but she never gave up.


"Nancy is a wonderful soul. At 95 she's energetic, eager and willing, all the qualities that make her a fighter," said Lynda Torel, the director of cardiopulmonary rehabilitation at the center who worked closely with Casale. "She's been on a fantastic journey. She never said no."
Casale was diagnosed with Covid on Jan. 1, 2022. Frank Casale, her son, who is a Melville based attorney, said he wasn’t surprised that his mother had it because it was only a matter of time.
Nancy was admitted to St. Francis Hospital and Heart Center for a week because her daughter, Debra Casale, a nurse practitioner, thought monoclonal antibodies were available there. It’s been used as a treatment for Covid since it was found to substantially reduce the likelihood of severe illness or death from the virus.
Nancy spent a frustrating week at St. Francis, where she was alone because the hospital prohibited visitors due to Covid. Frank, who lives with his mother, was disheartened when he learned that the antibodies were not available. “The hospital was a madhouse,” he said.
Nancy returned home, but by March she was in respiratory failure and was rushed to St. Josephs Hospital. Her condition was grave. “I was told to come home because Mom was going to die,” said Debra, a nurse practitioner who lives in South Carolina.
Frank said his mother got through the weekend and then had surgery on Monday to remove a fibrinous mesh around her lung that was inhibiting it from inflating. It’s a side effect of Covid. The surgery was successful, and Nancy remained at the hospital for two weeks to recover.
When in April doctors suggested Nancy go to a rehabilitation center Debra and Frank decided to send her to Glen Cove Center for Nursing and Rehabilitation, because it is one of the few rehab centers that does high flow oxygen therapy, which Nancy needed.
“Mom was in bad shape and they weren’t sure she would make it,” Debra said. “But Mom has a desire to live.”
Nancy was doing well but then in June she was admitted to Glen Cove Hospital to have an intestinal obstruction removed. Debra said she’s grateful her mother went there. She had worked at GCH 40 years ago as a registered nurse.
“It was excellent there for Mom,” she said. “It was clean, everyone was professional and friendly. It’s phenomenal because it’s run by the community. I can’t say anything bad about it.”
In late June Nancy returned to Glen Cove Center for Nursing and Rehabilitation. She worked hard to recover.
“The wing mom was in is astoundingly wonderful. The pulmonary PT really became close with Mom and worked with her,” Debra said. “She said I want more, and they let her have more.”
Torel said Nancy was representative of what the rehab center does best. “We met her on 10 liters of oxygen using the mask to breath and she’s going home walking on her own with no oxygen,” Torel said. “She’s been with us a long time.”
While she was there, Nancy inspired others to work to get better. “Every patient in the rehab had a better recovery because of Mom,” Frank said. “Mom is a nice person, compassionate. Every person they hooked mom up with said she’s better then medicine.”
Nancy agreed to be in several pictures with the staff and her children before leaving. She was happy. “I can’t complain because I’m here,” she said. Then pointing to the sky, she added, “I should have been up there.”
Then Torel and Nancy embraced one last time. “(Torel) got me to breath, she was the best,” Nancy said. “I couldn’t even get out of a chair. She showed me the right way and that was important.”
Nancy has returned to participating in the simple things in life, like watching a cooking show on TV or dozing in her favorite chair. And she’s resumed her passions — cooking and tending to her garden, where tomatoes and cucumbers are growing and growing.
Report an inappropriate comment