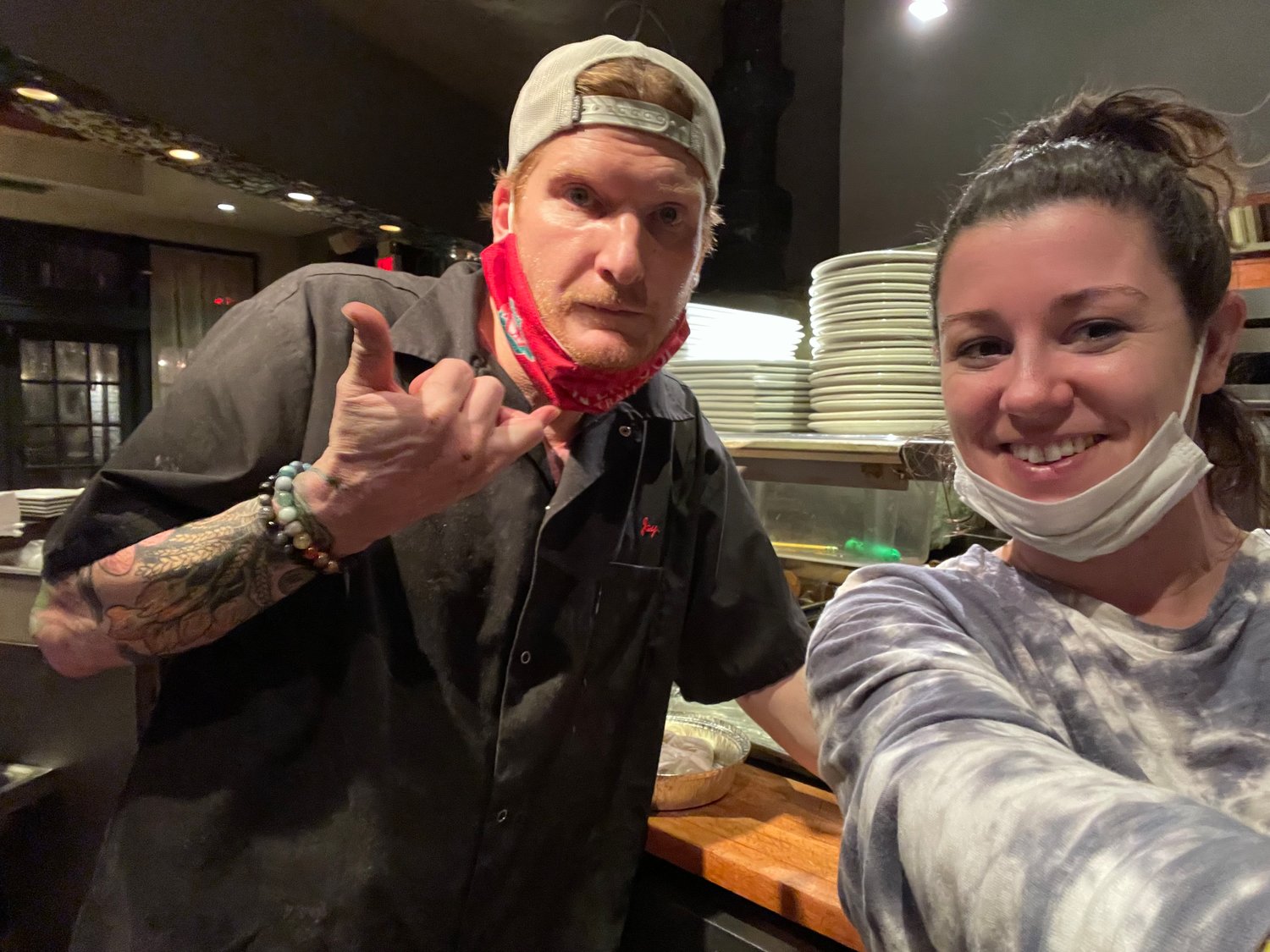 Jay and Tanya Potter prep for a night running the pop up stand in the kitchens of the Metropolitan Bistro.
Courtesy Jay Potter

Not only are they amazing chefs, but they’re also like really nice people.”
Jessica Coyle, Sea Cliff resident
By Will Sheeline

For many Americans, the pandemic was a time to huddle in the house, for fear of going outside where the threat of the virus lurked. But for some, like Jay and Tanya Potter of Sea Cliff, the coronavirus pandemic provided an unexpected opportunity to create a catering business and help their community reconnect over food during what was trying times.

The couple has a long history working in the food industry. Tanya attended the Cornell School of Hotel Administration, specializing in catering, while Jay went to the International — which was at the time French — Culinary Institute in Manhattan, and both have experience in various aspects of the food industry.

When Covid-19 hit, Jay was working as the corporate chef and partner with Blue Ribbon Restaurants in Manhattan, while Tanya was working for Empire Merchants, a wine and liquor distributor. When the pandemic left Jay furloughed and unable to work, he immediately began cooking in his spare time, creating various dishes from numerous different cultures and styles throughout the day.

It got to the point that the family had far more food than they could eat, so the Potters came up with the idea of sharing their dishes with the neighborhood.

“Jay just kept cooking and cooking at home, and we needed somewhere for this food to go, like we couldn’t actually eat all of the food he was making,” Tanya explained. “So we started having our kids deliver some of the food to our neighbors’ doorsteps, like homemade bagels, croissants and doughnuts, and then it kind of just spread from there.”

In April of 2020, the Potters began a weekly Friday pizza night, taking orders from community members which were also delivered by the couple’s children, who were masked and wore gloves. “Customers” would drop off the ingredients they wanted for the pizza at the Potter’s home. Soon the list of customers got so long that the family had to create a new email and order sheet to keep track of it all.

The couple realized they had created something special, so in July of 2020 they created their own catering company, Potter Chef Table. They began providing full restaurant style experiences to families still trapped in their homes during Covid.

This led to their opening up a “pop up” stand, in conjunction with Sea Cliff’s own Metropolitan Bistro, during the winter of 2021. Every Monday, the Potters would provide takeout meals cooked in the Bistro’s kitchen, with a rotating menu each week. It became so popular that the family has paired up with the village to operate the Sea Cliff Beach Concession Stand throughout the summer, providing more casual seafood and beachside dishes like oysters and shrimp po’ boys.

Edward Lieberman, former village mayor and current president of the Gold Coast Business Association, said he was blown away by how delicious the food was, and the convenience of the experience.

“My wife and I live right around the corner from Metropolitan Bistro, and that is one of our favorite restaurants,” Lieberman said. “So, when we saw the Potters were doing pop ups at the Bistro and heard about them in the community through their pizza parties, we thought we’d give it a shot, and we were extremely satisfied with their epicurean abilities.”

One newer customer of the Potters is Jessica Coyle, a Sea Cliff resident who first met them at the beginning of this year when she and her husband were looking to do something special for their father-in-law’s birthday.

Coyle said she was impressed not only by the preparation and quality of the food, which was a Mexican-style dinner, but also by the friendliness and kindness of the Potters themselves.

“Not only are they amazing chefs, but they’re also like really nice people,” Coyle said. “They’re always just very community focused and just always giving back, so it’s a win-win. You get great food and you get to support a local family that’s really focused on community building.”

The Potters have helped out their community in several ways, not least in providing their catering and cooking skills to numerous public events like the Sea Cliff Parent Community Association’s garden fundraiser. This year they even cooked Ukrainian food to help raise money for celebrity chef Jose Andres’ World Central Kitchen, a non-profit devoted to providing meals in the wake of disasters.

The family is now working on opening their own restaurant and hope to have a lease signed in the coming weeks. Even with their explosive growth in the past few years at the end of the day, the community is at the essence of their cooking, Jay said.

“We want to create community, you know, to create a place where people can come and feel taken care of, and not just in the way of foods and services,” he said. “The goal in mind is to always stay with this community-driven approach to service, like that’s what we do, we bring people food and happiness and a place they feel like they belong.”