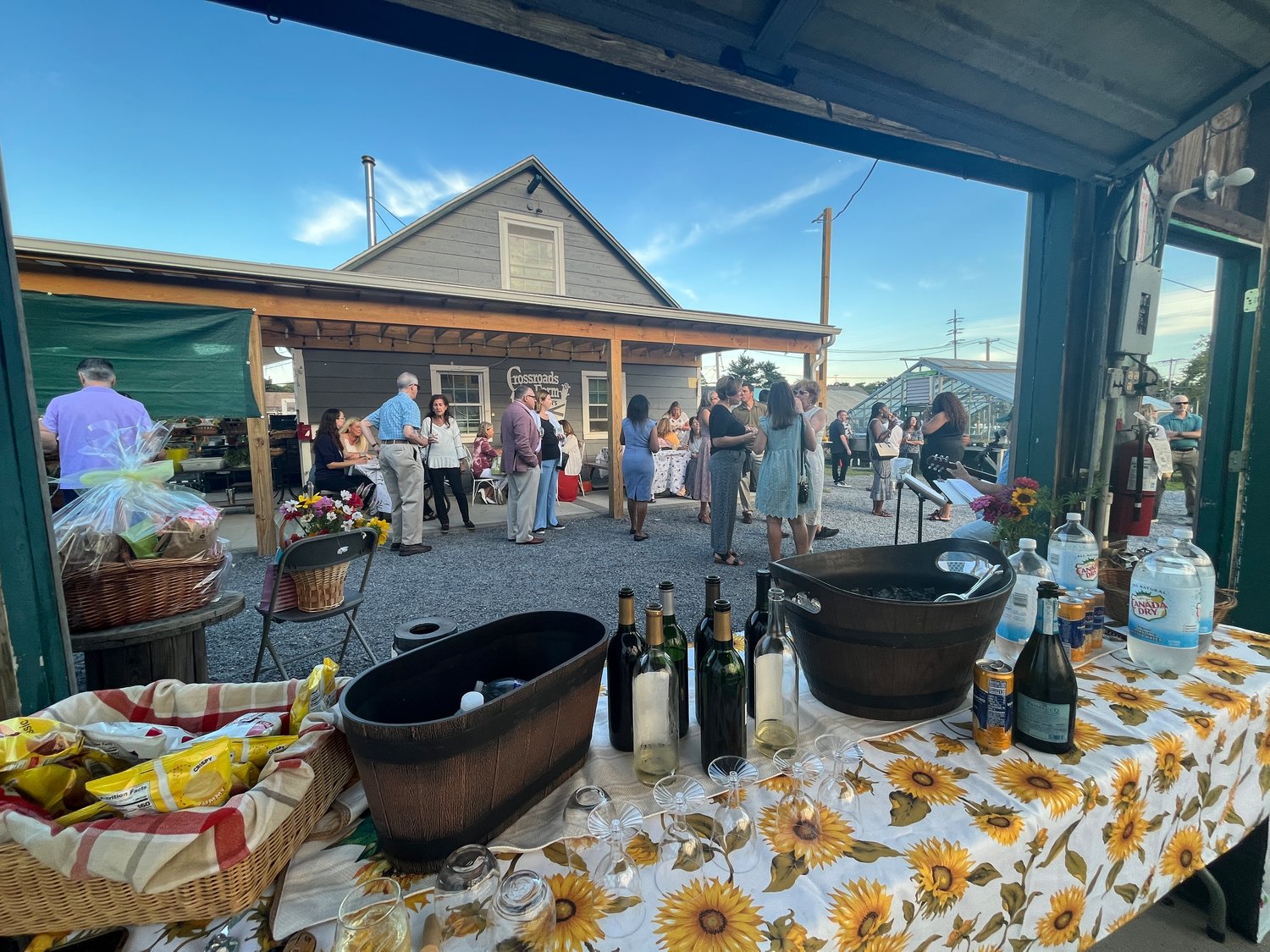 Attendees sampleD drinks and farm fresh appetizers at the annual farm to table benefit dinner at Crossroads Farm at Grossman’s on Sept. 10. The vast majority of ingredients used in preparing the dinner came straight from the farm’s fields.
Courtesy Jeanine Schroder 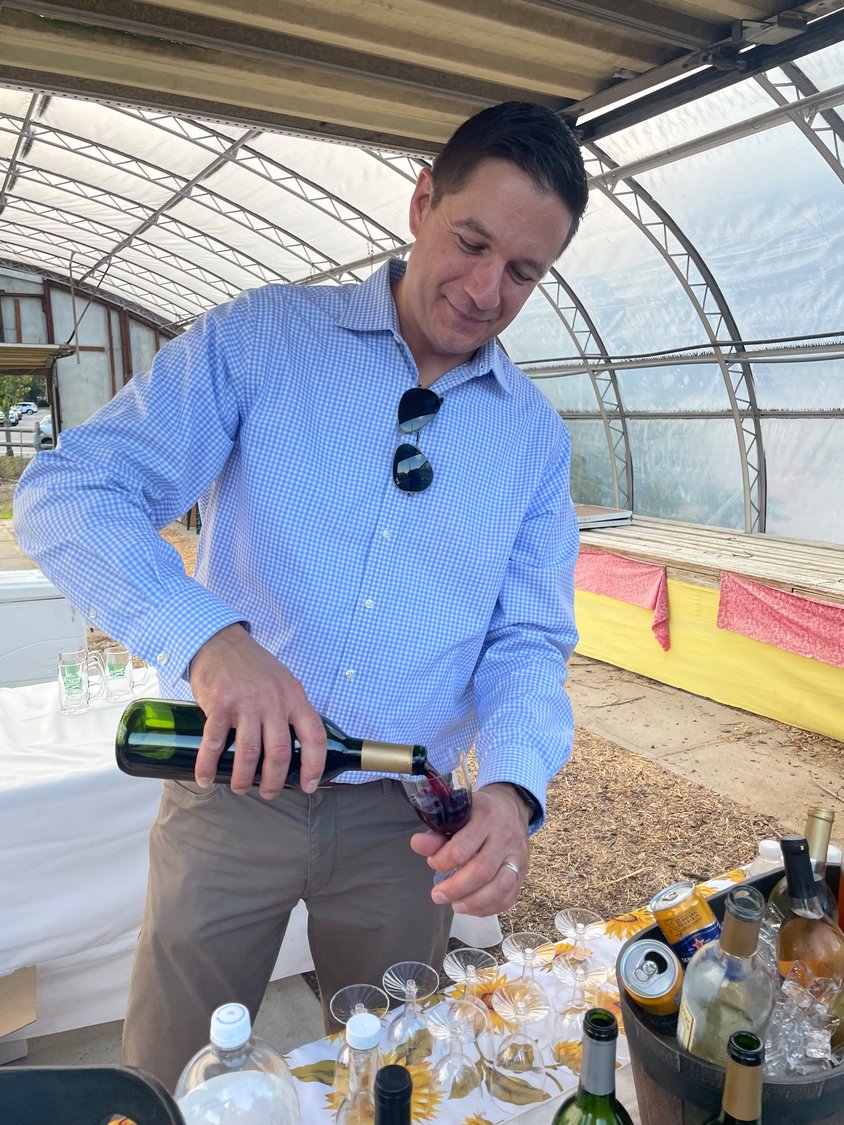 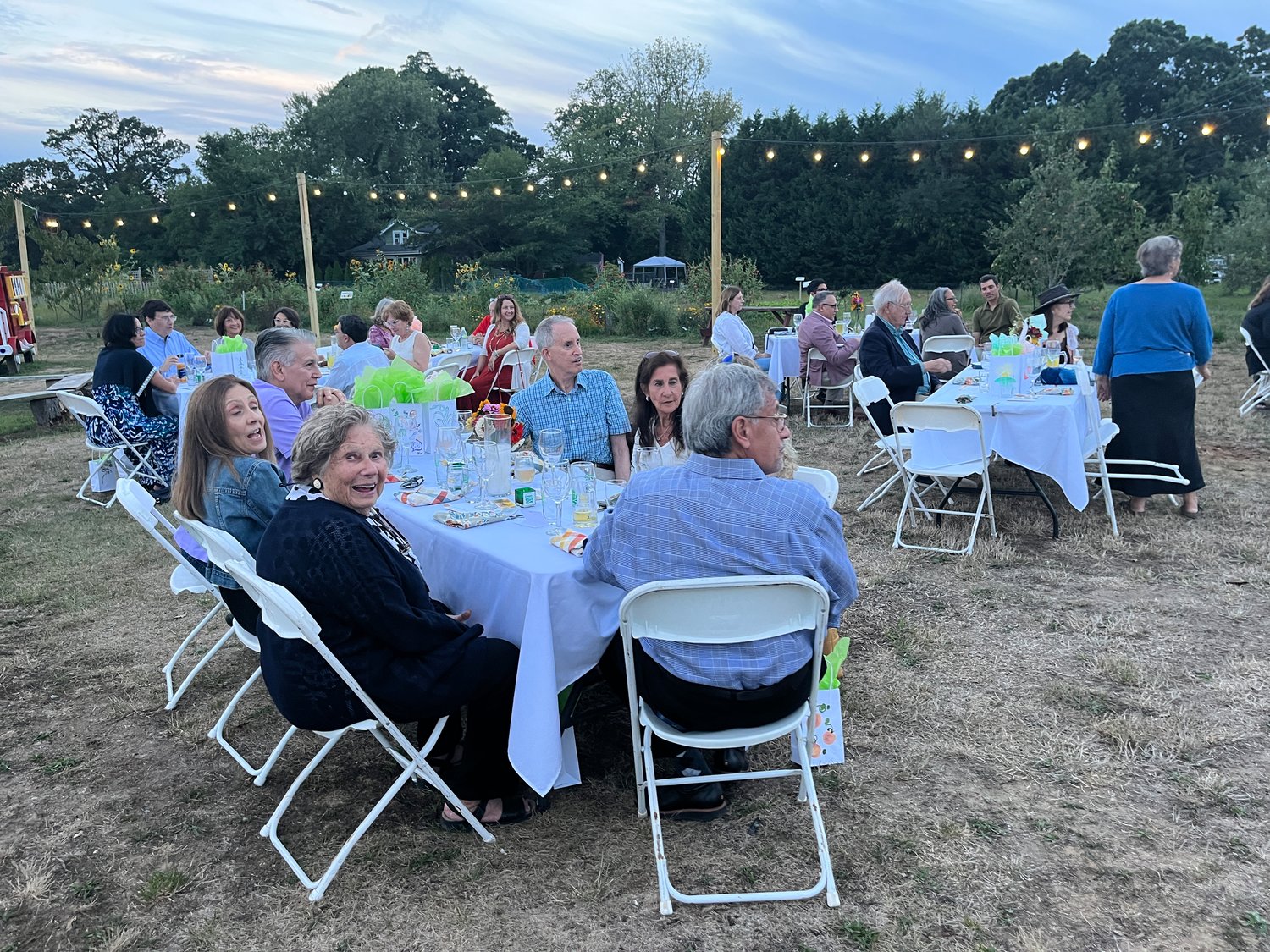 Benefit dinner attendees’ ears pricked up at the announcement that it was time to eat.
Courtesy Jeanine Schroder
Previous Next
By Kyle Chin

Crossroads Farm at Grossmann’s celebrated a bountiful harvest with a farm to table benefit dinner on the evening of Sept. 10. The dinner considered themes of connection, with each other and with nature.

Though Long Island experienced drought this summer, 2021 was an exceptionally productive year for Crossroads Farm. In 2021, the farm produced over 6,000 pounds of organic produce, of which 938 pounds were donated to organizations helping the needy. 418 flower bouquets were sold, while over 1,600 seedlings and 227 packets of seeds left the farm. Additionally, the farm sold 554 pounds of honey, small jars of which were given out in gift baskets at the close of the evening.

The evening began with a night of drinks and appetizers. Malverne’s Trustee Carl Prizzi took up bartending duties at the event. Prizzi has been a volunteer at the farm for many years. “It’s a great anchor of our community, and I always help out when I can,” he said.

Prime Catering prepared appetizers and dinner mostly using ingredients harvested at the farm. With the exception pasta, meat, and a few other assorted items, the meal was prepared with materials harvested directly on sight. Eggplant, squash, potatoes, tomatoes, string beans and much more were crafted into a wide array of mouthwatering dishes.

Attendee Francesco Iovine was quite familiar without fresh food can bring people together. Earlier this year, he co-wrote family cookbook “Meals and Memories with Nonno.”

Iovine and Crossroads Farm are planning to partner in creating a cookbook of family recipes from farm stand patrons. He and farm staff encouraged those with recipes and accompanying family photos to submit them to info@nassaulandtrust.org.

Elizabeth Kheim, executive director of Homecoming Farm in Amityville touched on themes of connection through food in her own keynote remarks.

Homecoming farm has set up a garlic peace bed, growing garlic plants originating from conflict zones throughout the world. “We are all joined together by food,” said Kheim. “I’ve come to the realization that what we need are bigger tables. Longer tables. Because that brings peace.”

Kheim came from a background in floristry, and became more involved in organic planting while she helped care for her mother and planting flowers in her yard. The flowers gave Kheim’s mother much joy, she recalled.

Kheim was much inspired by Catholic priest and theologian Thomas Berry, who was keenly fascinated by the natural sciences. “Whatever preserves and enhances the meadow, and the natural cycles is good. What is opposed to this meadow is not good. My life orientation is that simple,” she quotes Berry as saying. Kheim cites the natural beauty of meadows as inspiration for her farm’s organic practices, in stark contrast to the largely plain green carpets of grass most common in the suburbs.

“I often ask visitors to out farm, ‘What is the first flower that a mother usually receives from her child?’ It’s the dandelion,” said Kheim. “How many of you see dandelions in your lawns anymore? Some of us have them, but some people don’t, and they get upset with the people who still have them.”

“In organic farming, the focus is on the health of the soil. So we don’t use any pesticides, herbicides, and fungicides. We rely on not just organic but what are considred regenerative growing practices,” she stated.

“Here on Long Island it’s really important because we’re on an aquifer,” Kheim explained. If you use those chemicals, they go right into the water, and they head south into the bay.”

Kheim’s words about the importance of the local farm apparently resonated with others. “I heard someone say that they need this farm for their soul,” she recalled.