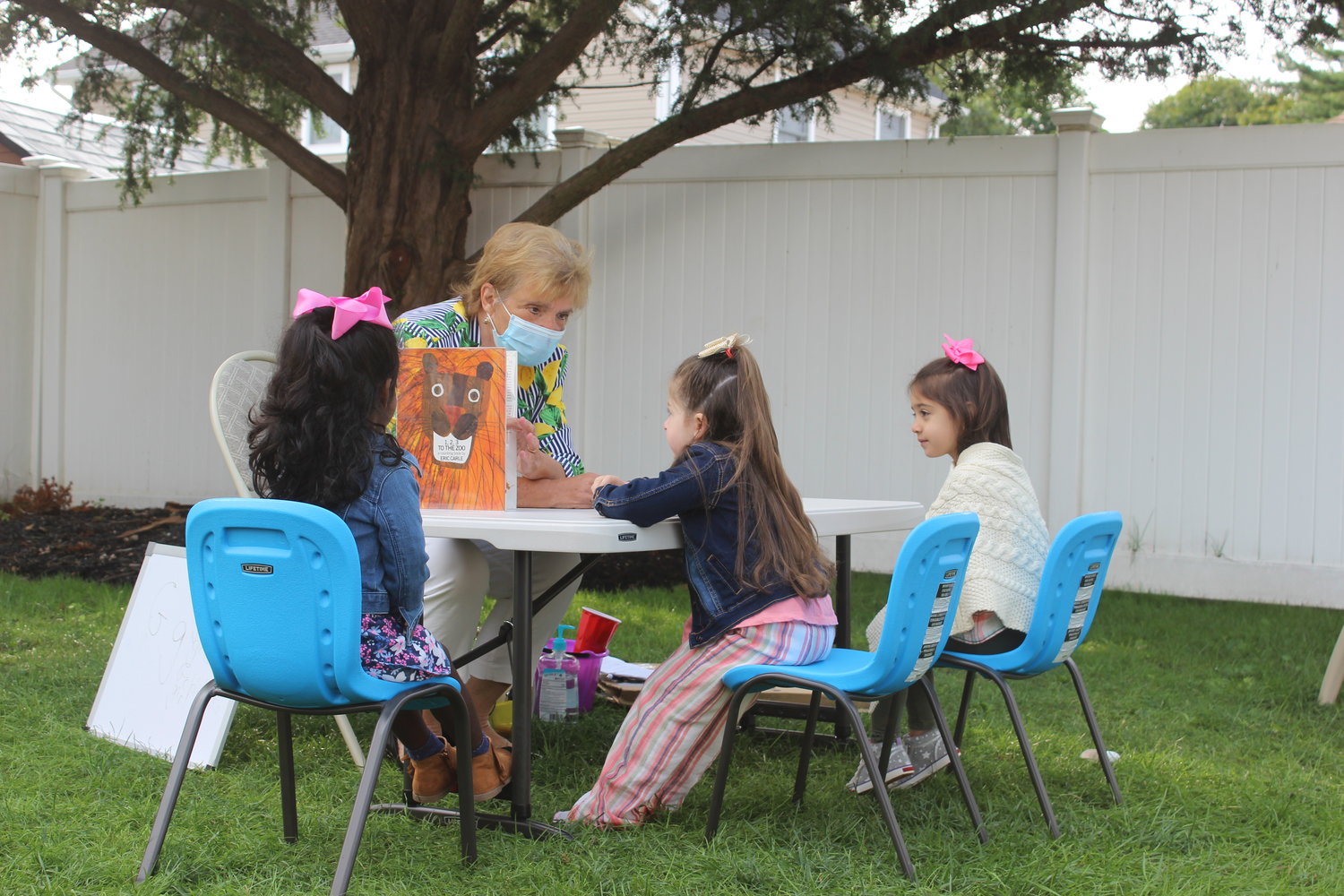 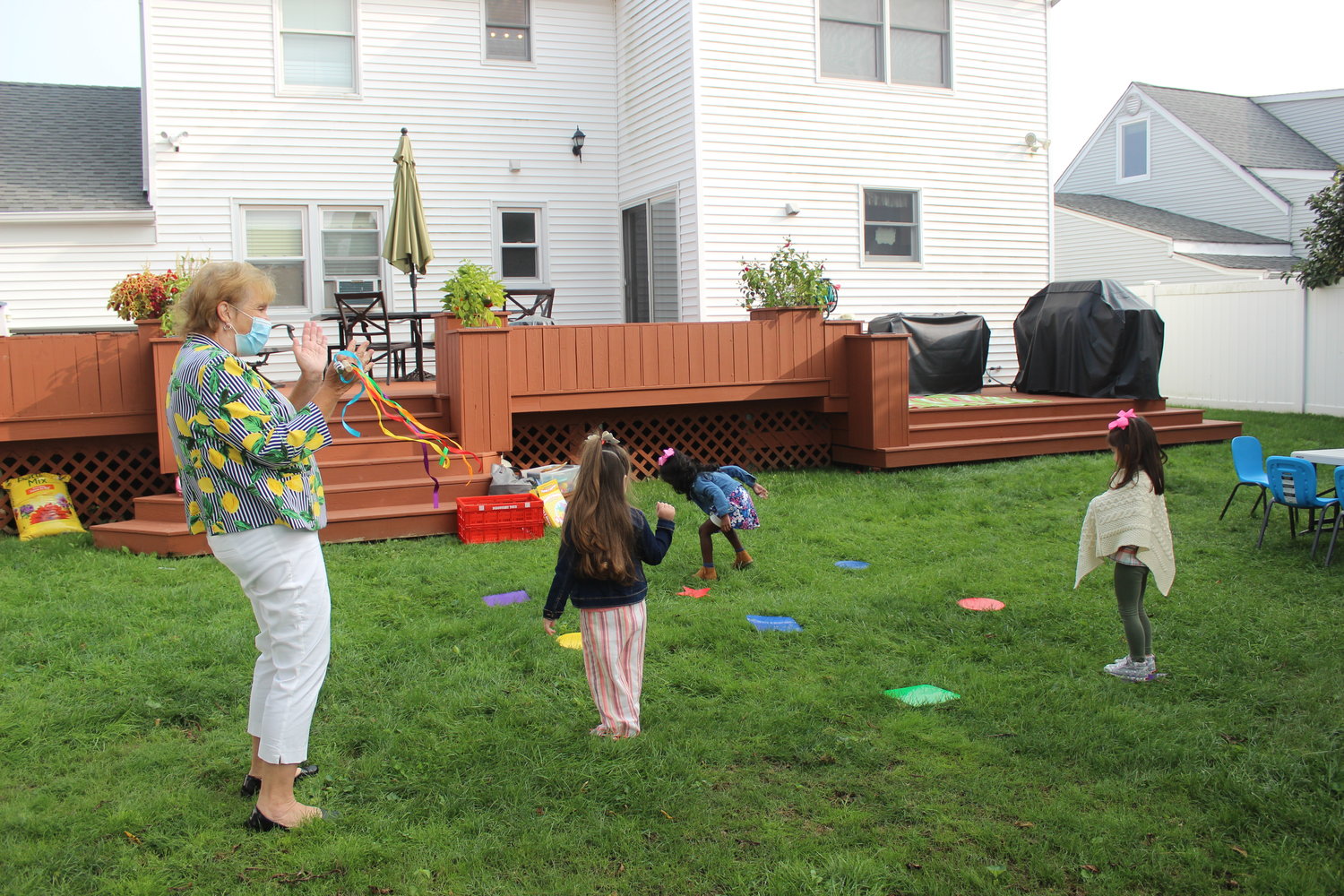 Set up through a supplemental education company called J.A. Tutoring, pods like the one above allow students a socially distanced alternative to a traditional classroom setting. Above, Bass, left, played a learning game with Rebecca, Karina and Susie.
BRIAN STIEGLITZ/HERALD 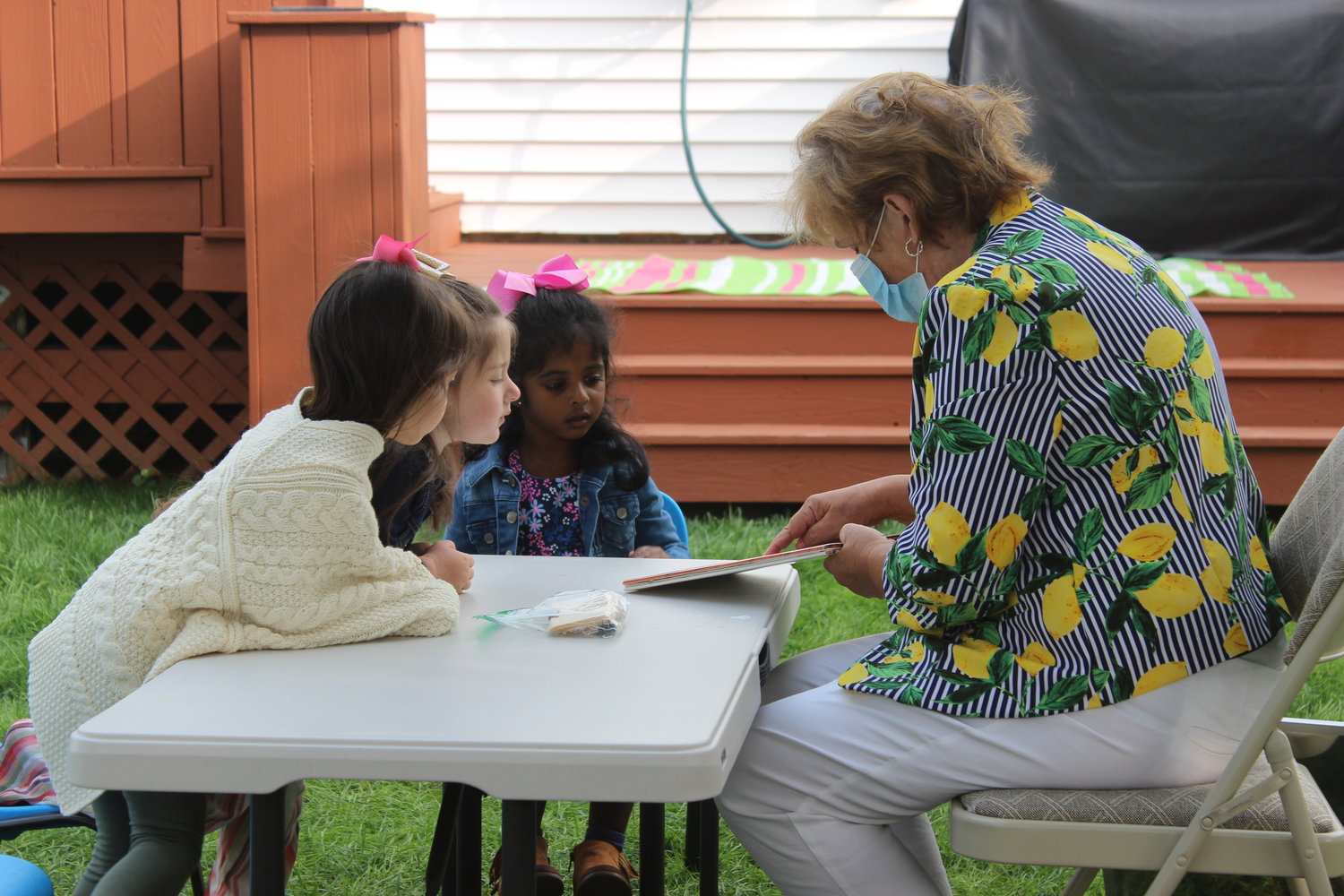 Susie, left, Rebecca and Karina meet in their pod, led by Bass, twice a week instead of attending a traditional nursery school.
BRIAN STIEGLITZ/HERALD
Previous Next
By Brian Stieglitz

“Welcome to Backyard School,” reads a dry-erase board in the backyard of Kim Chalom’s East Meadow home, which she had transformed into a “pandemic pod,” or “micro-school,” for her daughter and two other 3-year-olds.

Twice a week, for two hours at a time, the children meet with retired Manhattan teacher Anne Bass instead of going to a traditional nursery school. Pods like this one have been emerging across the country as an alternative for parents who would rather not send their children back to school and risk possible exposure to the coronavirus.

Since Aug. 11, Bass has been teaching Rebecca Chalom, Karina Ponnappan and Susie Wansor about shapes, numbers and the alphabet, among other lessons. On Tuesday, the students learned about zoo animals by reading Eric Carle’s book “1, 2, 3 to the Zoo.”

“Do you think animals like being in the zoo?” Bass asked.

Rebecca raised her hand and answered, “I think so. Animals want to be in the zoo so people could come and see them.”

“That’s a good answer,” Bass said. “Then kids could see them and won’t be afraid of them.”

Kim Chalom met Mani Ponnappan and Savina Wansor, both of New Hyde Park, when their daughters were in Mommy and Me classes together last year at the now-closed Gymboree in Westbury. The three had planned to send their daughters to separate nursery schools this fall, but were hesitant after the pandemic hit. Then Wansor read about a supplemental education company called J.A. Tutoring in a Facebook post.

Jenna Hoelzer and Allison Kryder, both of Merrick, who founded J.A. Tutoring in 2006, began forming pandemic pods over the summer. They have created roughly a dozen pods throughout Nassau County, and offer one-on-one tutoring with both remote and in-person options.

Each pod has between two and 10 students, and members devise a schedule that works for the students and their teachers. “Each pod has its own guidelines,” Hoelzer explained, “and we work with everyone to make sure they’re all following them.” At Chalom’s pod, for example, the students are not required to wear masks, but their teacher does.

Chalom, Ponnappan and Wansor decided to hold their pod in Chalom’s spacious East Meadow backyard, then contacted J.A. Tutoring, which paired them with Bass. The group is still mulling an alternative as the weather cools, but have rain dates for classes built into their schedule.

The mothers also communicate daily about where they go and with whom they interact. Chalom said that having their children learn in a pod gave them more security than having them in a room full of people they may not know.

“It’s a big advantage for them to have social interaction as well as a relationship with a teacher, face to face,” Kryder said.

“These are all families that know each other,” Hoelzer added, “so their children will get social interaction with others who they know are safe.”

“Our whole mission as a company is to be flexible with our clients,” Kryder said. “That’s why we thought it would be such a good idea to start doing pods. We’ll do whatever we can to support a child’s education in this crazy, unprecedented time when everything feels so out of control.”

For Chalom, Ponnappan and Wansor, the pod time gives them a chance to focus on projects of their own. Chalom creates nail polish strip designs that she sells on an online platform called Color Street.

As for her daughter, she said, “She loves it. She considers it real school and loves her teacher.”

“Their teacher really meets all their needs,” Ponnappan added, “because it’s such a small group.”