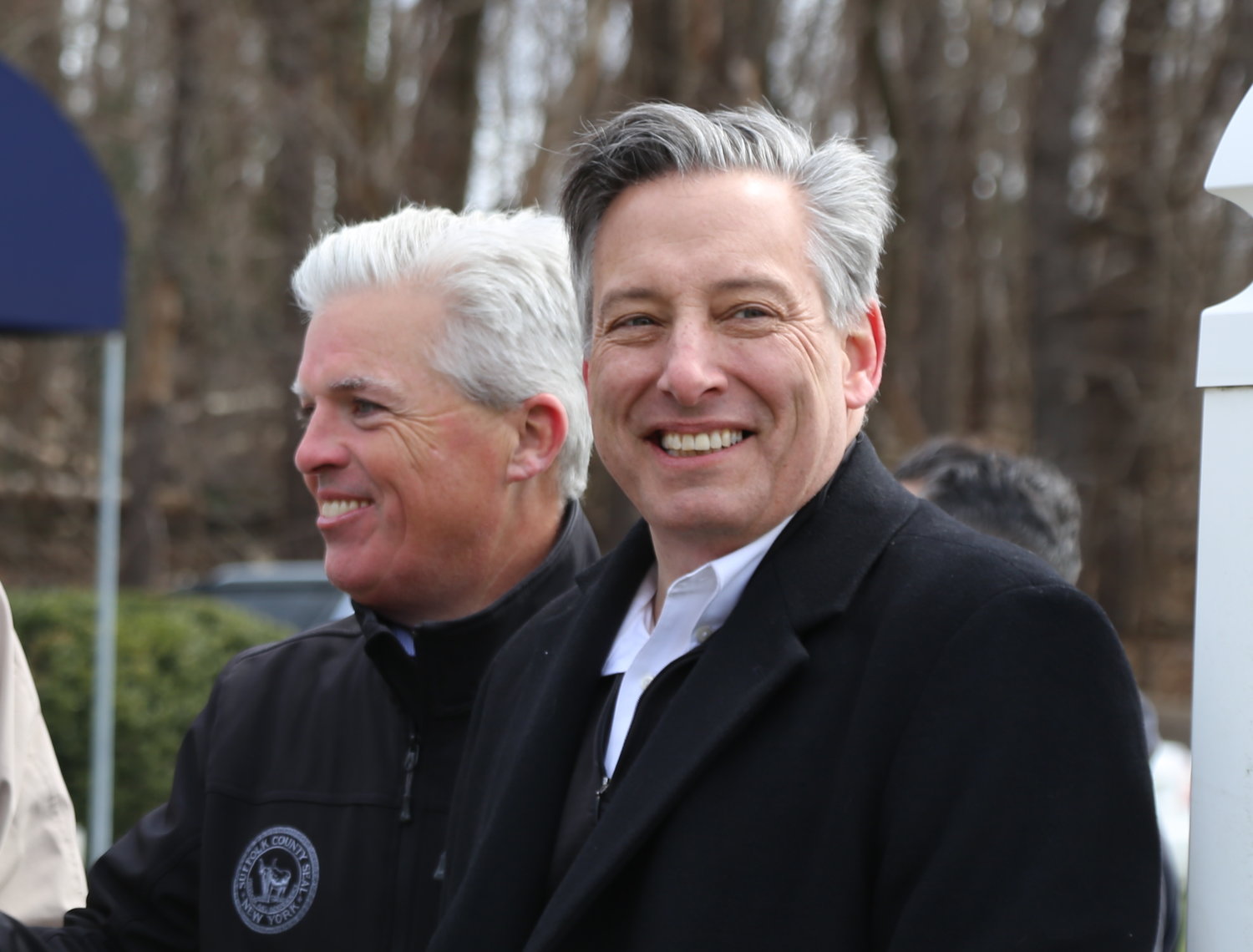 on Kaiman, right, who was North Hempstead Town Supervisor for a decade, seen here with Suffolk County Executive Steve Bellone, is ready to take his ideas and programs to the federal level.
Courtesy Jon Kaiman for Congress
Jon Kaiman

Jon Kaiman has had a unique 24-year political career and some would say he’s seen it all. Now he has his sights set on filling U.S. Rep. Tom Suozzi’s seat, who he challenged unsuccessfully in 2016. Six years later, he’s even more qualified than before, Kaiman said.

“I’ve partnered with local districts, with the state government, with the federal government, to address environmental needs, quality of life needs, social needs, community needs, and I appreciate and understand the larger issues that we face globally,” Kaiman said. “I am comfortable engaging with those who agree and disagree with me. I’ve always been able to do this, which is unique.”

His experiences in the political world began as the New York state campaign manager for Gary Hart’s presidential run while Kaiman was a student at Hofstra University Law School. While a general practitioner, he was appointed as a Nassau County district court judge. Then he ran and won. He was former Gov. Andrew Cuomo’s special advisor during Superstorm Sandy, where he was one of three who led the relief effort with New York Rising. Simultaneously, he served as chairman of Nassau Interim Finance Authority. But people on the North Shore probably remember him most as the Town of North Hempstead Supervisor from 2004 through 2013.

Now he’s known in Suffolk County too. Kaiman, 59, of Great Neck, has been the deputy county executive for Suffolk County Executive Steve Bellone since 2017, the only resident from Nassau in the administration.

Jerry Laricchiuta, the Long Island region one Civil Service Employees Association president, was on the opposite side of the bargaining table during contract negotiations in 2011, when Kaiman was the president of NIFA. He was able to do what most thought was impossible — negotiate a contract with Laricchiuta for the county’s unions that lifted a four-year wage freeze.

“Jon slowly but surely approved certain things and gave his word it would be done correctly and because of him all five unions came together to unfreeze the contracts,” Laricchiuta said. “If he wasn’t chairman of NIFA it wouldn’t have been done. Jon cares about workers and taxpayers.”

Although Laricchiuta is quick to say he is a lifelong Republican, he said if he could, he would vote for Kaiman for Congress.

“I gained so much respect for him at that time. He just wouldn’t quit,” Laricchiuta recalled. “We didn’t trust NIFA, but everything Jon said I believed him. He’s not afraid to make tough decisions, not afraid to say something that may not be politically beneficial. He’s credible. You know when you speak to him he means what he says and not just what you want to hear.”

When Kaiman was North Hempstead supervisor in 2005, he implemented the 311 program, which still exists today. Residents can call the town with an issue, like a streetlight that’s out, and an operator will direct it to the appropriate department. The town makes a commitment that the problem will be resolved in a certain amount of time and a record is kept of when the call was made and its progression, which department managers follow. Kaiman brought the program to Suffolk County and would like to expand its reach, if elected to Congress.

“We were giving everyone access to their government with this program,” he said. “And it’s giving people confidence that their government works and helps government to be able to manage its resources through data and connecting to the public.”

The 311 program also reduces the burden on police for non-emergency events and issues. When residents can reach their government directly, they avoid calling 911, which is cost effective, Kaiman said.

As a congressman, he said he’d support giving federal grants to local municipalities so they can invest in the 311 system.

During Kaiman’s career he’s advocated for Long Island. While leading New York Rising, he ensured that additional monies — hundreds of millions of dollars — were given to L.I. to cover what the community needed.

He also founded Project Independence, which Kaiman said is his signature program, in 2008, which uses grant funding to help seniors remain in their homes as long as possible by connecting them to additional services, programs and providers. Through the program, which still exists in the Town of North Hempstead, seniors can take a taxi cab to the supermarket and doctor’s office paying a minimal fee with the town paying the rest of the fare.

“The first year of this program we went from providing 2,000 rides on our [town provided] bus to 25,000 rides in taxi cabs to medical appointments and supermarkets,” Kaiman said. “I also arranged for a visiting neighbor program, social workers, a handyman program and an education program.”

Kaiman plans to take Project Independence national. He’s already created the model, fulfilling a request by Senator Kristen Gillibrand, which includes instructions for municipalities on how to apply for the program. Project Independence would also provide an avenue for government to use the data to solve problems, Kaiman said.

He’s reformed Suffolk County’s police department by co-chairing a task force, which brought together advocates, police, legislators, and individuals who have been impacted by policing in the community. A program was developed that uses data analytics, that Kaiman said will change the culture of policing, with its anti-bias, systemic-bias and de-escalation trainings.

Police are no longer promoted in Suffolk based on how many tickets they write or the number of arrests. Instead, they need to be able to document how many issues they resolved in the course of the day, which can vary from stopping a crime to helping a senior citizen.

“I’ve always found him to be pragmatic, professional and an independent thinker,” Donnelly said. “He’s able to listen to different opinions.”

As far as Kaiman’s skills with project management for the county, Donnelly said he gets things done, perhaps because he is adept in working across the aisle.

“If you were to call any county legislator they will all say Jon’s engaging and able to be civil during heated moments and is able to pragmatically find a way to get projects to the finish line,” Donnelly said.

As far as ensuring the environment is sound, Kaiman has several ideas. The carbon footprint needs to be reduced, which can be accomplished by changing the culture of municipal policies. Fleets need to be transitioned to electric vehicles and building codes need to be enforced that prohibit carbons from escaping into the environment, he said.

“We need to figure out how to create more sewers and improve the sewer systems and the wastewater treatment systems,” Kaiman said. “I merged two sewer plants as supervisor and brought in a much more significant environmental process called tertiary treatment that significantly reduced the amount of nitrogen that went into the local waterway.”

What’s interesting about his career trajectory, Kaiman said, is that he’s been aggressive at solving problems and pursuing creative solutions to systemic problems, whether it’s flooding, managing a government or giving people access to it. It’s time, he said, to take everything he’s done during his time as a leader to the federal level and go national with his programs.