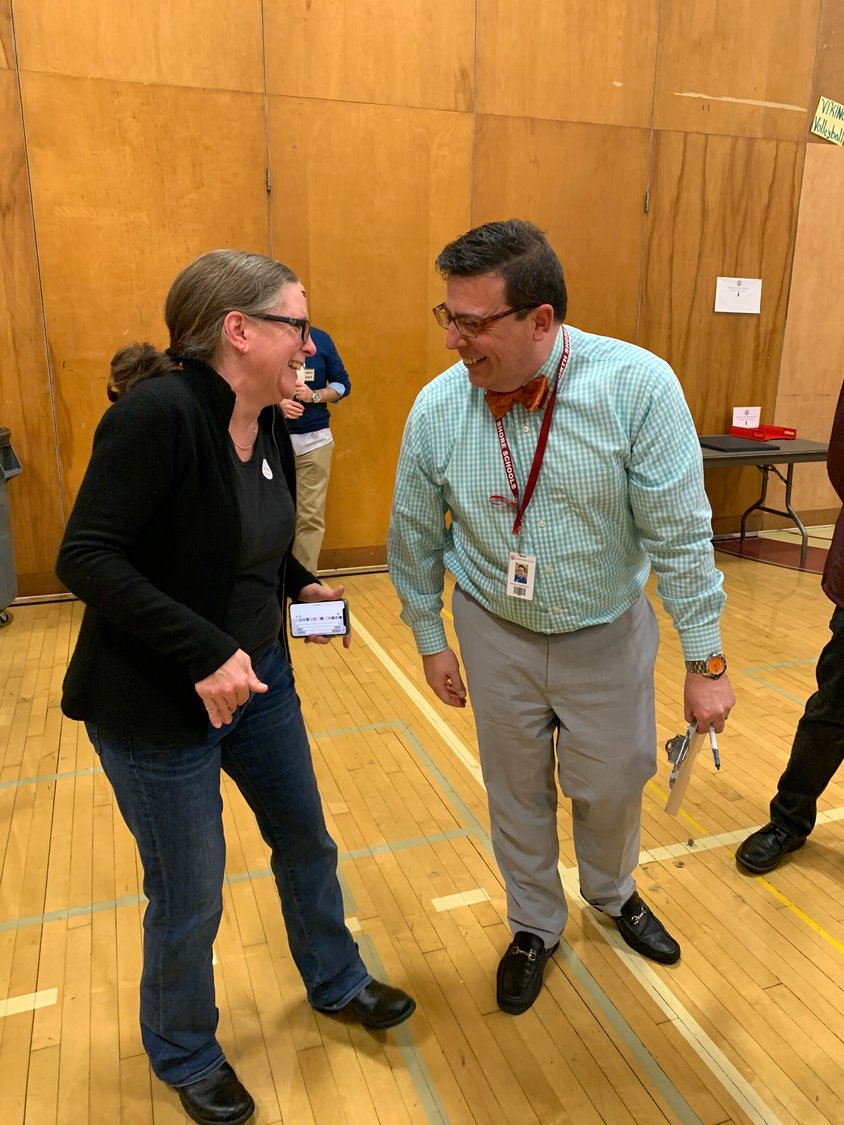 Board of Education President Sara Jones, left, and Superintendent Dr. Peter Giarrizzo were among the first to celebrate the passing of the bond.
Mike Conn/Herald Gazette
Spending per building

Some changes coming to each building

•New corridor linking opposite sides of the building

•Conversion of main office into a conference room

•Addition of canopy and refurbishment of existing one

North Shore School District faculty and parents were jubilant when they heard that a $39.9 million school bond had passed. According to tentative results, there were 931 “yes” votes and 500 “nos.”
A small gathering cheered in the high school gym after the results were announced, and Board of Education trustees and district administrators who had pushed aggressively for the bond’s passage since it was proposed in September congratulated one another.
“This was a ton of work,” Superintendent Dr. Peter Giarrizzo said. “It was the result of two years of research, study [and] analysis. I asked people to think boldly and broadly about what would take our schools to the next level of distinction, and here we are.”
“It just is a marvelous result that does such good things for children in the short, the medium and the long term,” Giarrizzo continued, “and I’m just really proud to be the leader of a district that puts teaching and learning at the forefront of everything we do. This is a good result for kids and a good result for our community. I’m over the moon.”
School board President Sara Jones and Vice President Dave Ludmar thanked administrators, fellow trustees and parents who helped promote the bond for their efforts over the past three months. “I’m just so happy,” Jones said. “To see the community support for these schools is tremendously gratifying. The work we’re going to be able to do with the bond is important. It’s important to our infrastructure, it’s important to the value of our schools and it’s important to how our students are going to learn in the future. To see the community turn out like this and support it is everything you’d want in a neighborhood.”


Ludmar expressed his appreciation for the turnout, especially given the rainy weather. “This bond is three years of work, and it’s really going to work for the community,” he said. “It’s going to give a lot of different people a lot of things that are going to be better for their kids and for the district as a whole.”
The bond is broken into five categories — instruction, infrastructure, safety and security, air conditioning and site work. Instructional needs — which include new science labs and corridors — and infrastructure account for most of the proposed spending, totaling $19.3 million and $13.6 million, respectively.
Security additions, such as vestibules at all schools and door replacements, will cost $4 million, and air conditioning will add another $2.7 million. The remaining $291,555 will fund site work, including bringing the Sea Cliff Elementary School entrance into compliance with the federal Americans with Disabilities Act, and replacing the high school’s press box.
With past bonds set to retire within the next few years, the district was able to use $800,000 in remaining debt to fund facilities. Because the district’s debt service is decreasing, it calculated a borrowing power of $40 million, so the $39.9 million bond will not create any additional cost for taxpayers, according to district officials.
Parents have raised the issue of air conditioning several times in recent years. The high school and middle school have window units, but only a few rooms in the elementary schools have air conditioning. Giarrizzo said the district would work with energy company Ecosystem on an energy performance contract, which would reduce the cost of installing air conditioning in all of its buildings.
The contract stipulates that air conditioning must pay for itself over 18 years through various savings. The district would, for example, cut costs by installing central air in the middle and high schools and moving the window units to the elementary schools. In doing so, Giarrizzo explained, the district would spend $2.7 million on a project that would have cost more than $7 million without the energy performance contract. Other ways in which the district plans to save money through energy efficiencies include the installation of solar panels in every school, the use of LED lighting and heating network upgrades.
The district will now create a schedule for the work, and determine how much of it can be done during the summer of 2020.
Giarrizzo said he was excited about getting to work, and added that he and the district have the North Shore community to thank for giving them the opportunity to improve the lives and education of the community’s children.
“We asked our community to trust us in a reasonably precarious time,” he said, “and I just can’t emphasize how much that means to me.”
Report an inappropriate comment