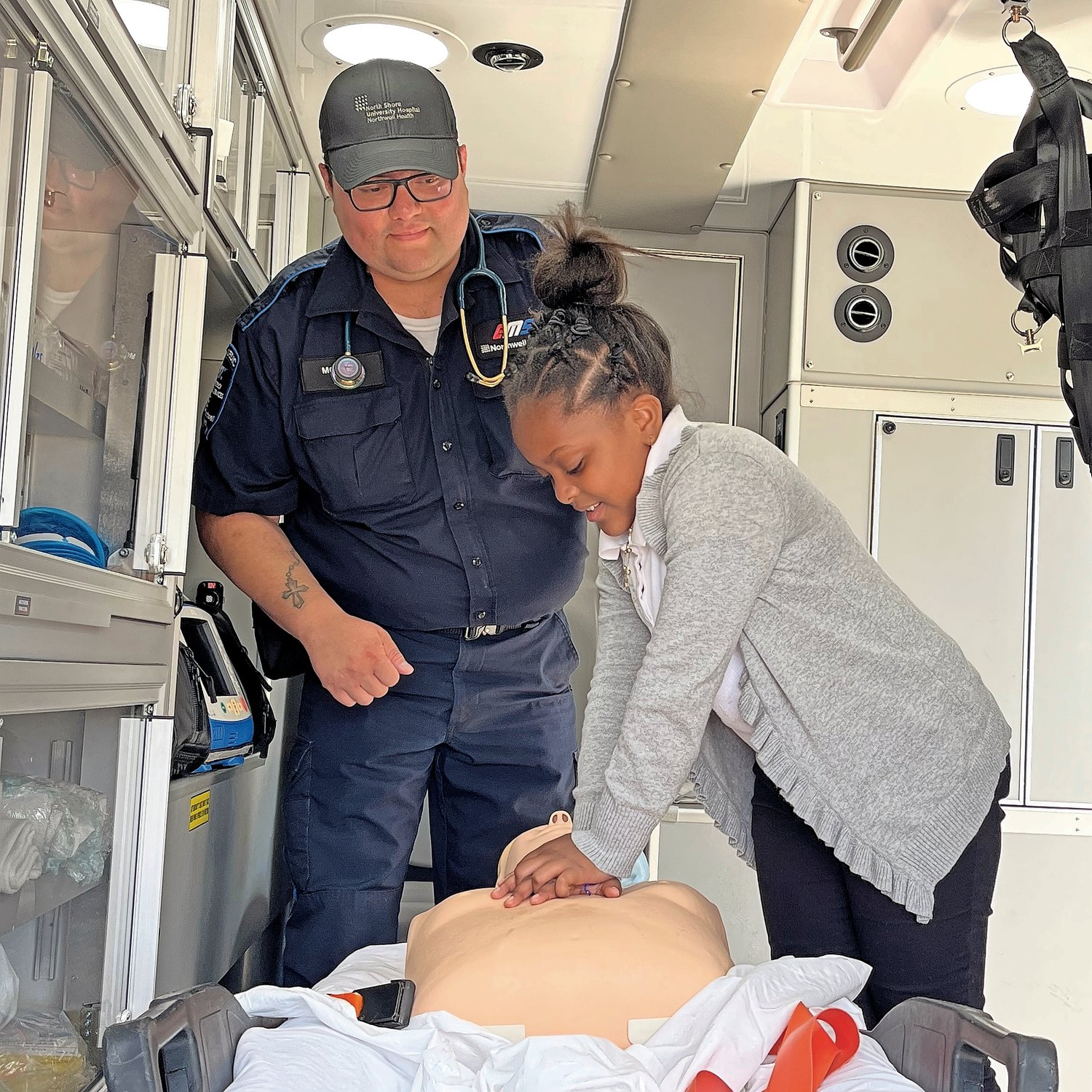 Northwell Paramedic Michael Morales looks on as 10-year-old Kayli-Aneek Skyla of David Patterson School in Hempstead practices compression on a CPR mannequin in the back of an ambulance. Skyla was taking part in a Career Day at David Paterson School on June 9. Other careers included police detective, public service, nursing, teaching and the law.
Courtesy Hempstead Public Schools

David Paterson Elementary School hosted its annual Career Day 2022 on Thursday, June 9. First through sixth graders were given the opportunity to learn about various career pathways from members of the Hempstead community.

A visit by the school’s namesake, former state governor David Paterson, was a wonderful surprise. He shared stories about being a student at the school when it was named Fulton School. He was, and is, legally blind, but his mother made sure her young son was included in the general population even with his disability. He became a lawyer and eventually the New York State governor.

In addition to Paterson, students heard from nurses, teachers, medical personnel, police detectives and a paramedic and emergency medical technician.

Children visiting the career fair even learned about life in politics from Town of Hempstead Deputy Supervisor and Senior Councilwoman Dorothy Goosby.

Ms. Goosby passed out booklets to each student that referenced STEM (science, technology, engineering, and math). She also emphasized the importance of continuing to read during the summer months when children are out of school.

Fifth-grader Kayli-Aneek Skyla, 10, asked a question so profound that it earned her a surprise individual tour of the ambulance of paramedic Michael Morales and emergency medical technician (EMT) Anthony DiMarino.

“I asked the governor if the way people felt about him changed when he became governor,” Kayli-Aneek remembered afterward. “The governor has a lot of power and I wondered if that affected how people acted.”

In answering, the governor referenced “Saturday Night Live” skits where the comedy show made fun of his blindness. He added that he was surprised that his disability was the topic and not his race.

“It was really cool,” Kayli-Aneek said of the tour. “The only other time I had been in an ambulance was when I was four and my grandmother had an accident.”

After the tour, she got to practice CPR chest compressions on the medical mannequin that the paramedic and EMT use for demonstrations. Her technique was praised by Morales, who was an EMT for eight years becoming a paramedic two years ago.

“For someone her age to understand and execute good compressions, that to me was uplifting,” Morales said. “To know that someone that age is excited about making a difference is so important.”

Kayli-Aneek said that while she enjoyed the tour, she’s not sure she’s ready to commit to a medical career.

“I enjoyed practicing the compressions, but I am a little scared at the thought of having people’s lives in my hands,” Kayli-Aneek said.