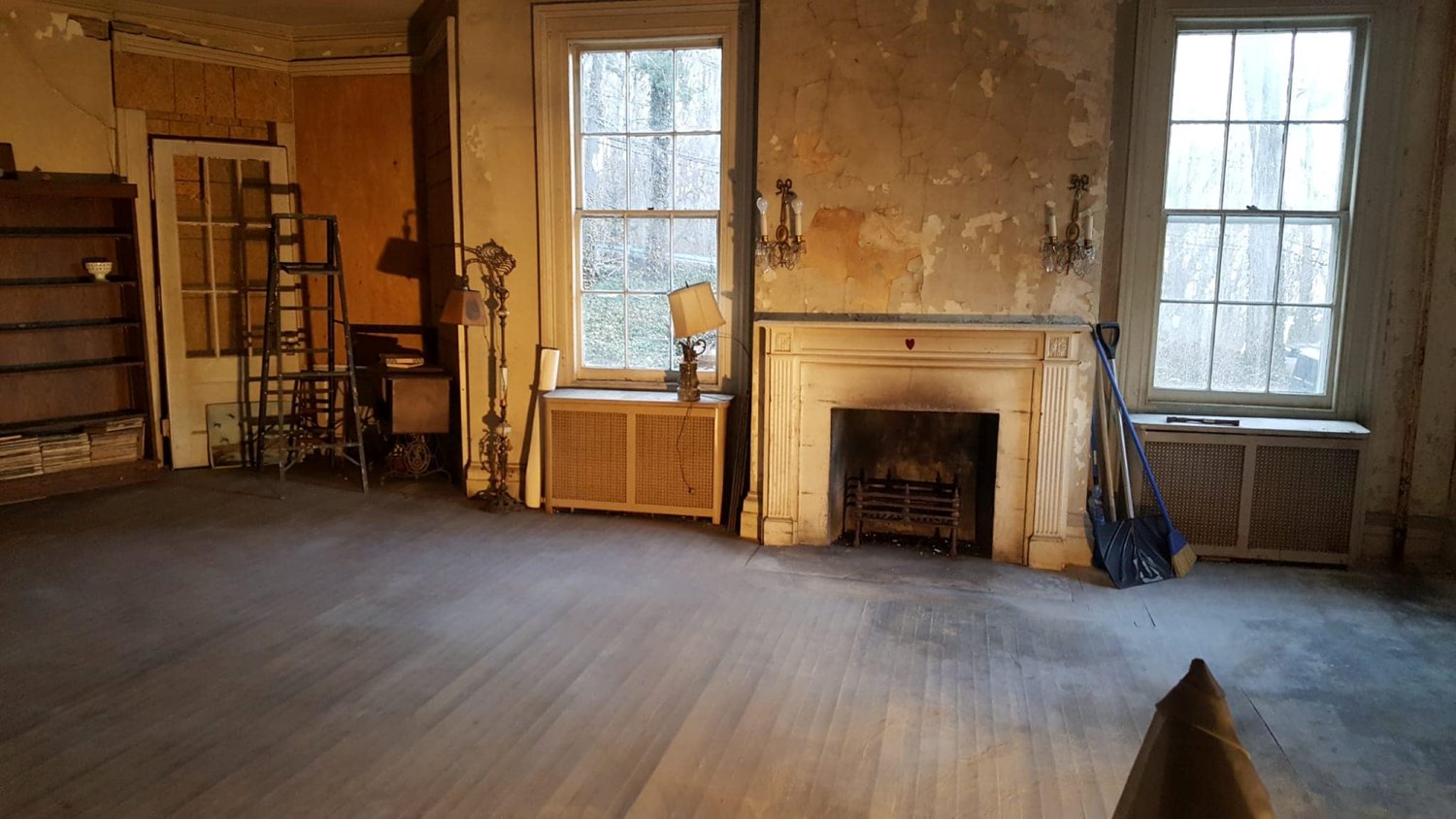 Some rooms like the living room were unlivable, with boarded up windows and no central lighting or running water.
Courtesy Jaime Arty 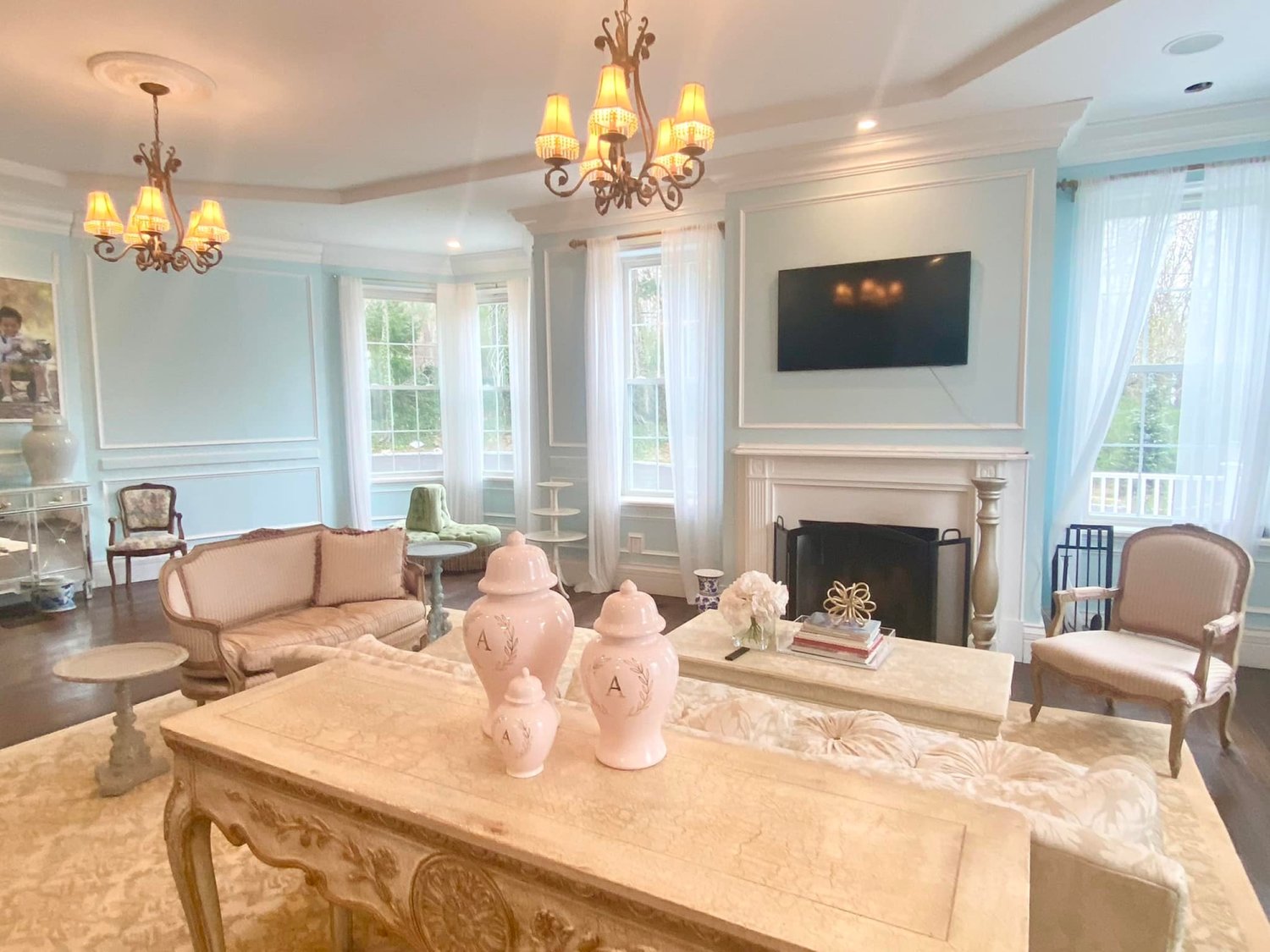 After a year and a lot of work, the living room has returned to a place of prominence. It’s now a welcoming place for guests, just like it would have been when William Townsend McCoun owned the place.
Courtesy Jaime Arty 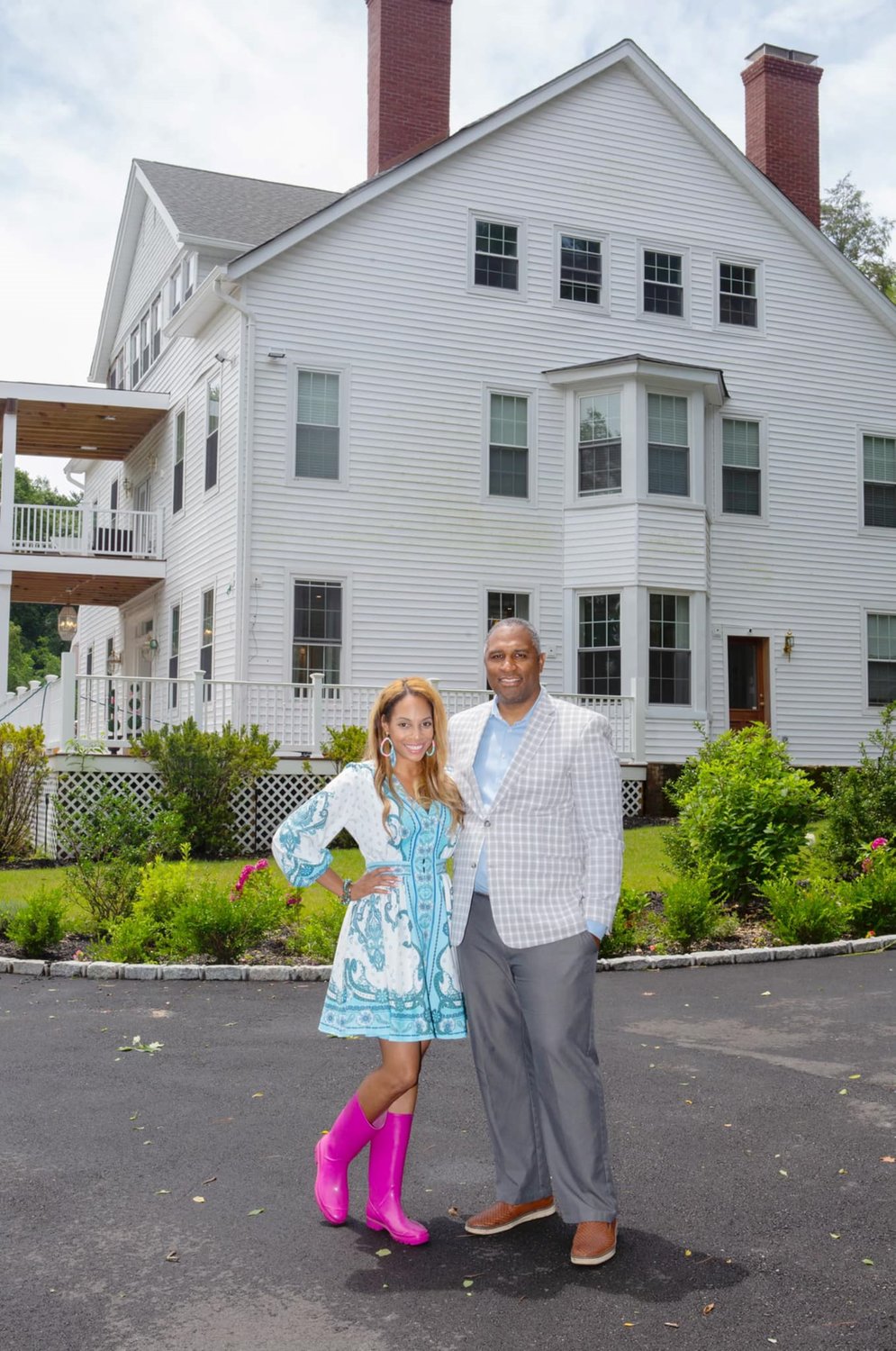 Although it has taken a great deal of time and effort on the part of, Jaime, left, and her husband Frantz, the reward has been seeing the space come to life in front of them as they raise their family and learn more about their home’s unique history.
Courtesy Jaime Arty
Previous Next

We stumbled upon this gem, or at least I thought it was a gem.”
Frantz Arty
By Will Sheeline

When many people buy a home, they expect it be fully furnished with the latest piping, electricity and other modern amenities. Some families take a different path however, such as the Arty family of Oyster Bay, whose renovation of their 1834 mansion has captured the attention of social media and even the film industry.
When Frantz and Jamie Arty began looking for homes in Oyster Bay, they stumbled upon an old mansion right in the hamlet. While the house and its nearby cottage were in a serious state of dilapidation, the couple knew there was something special about the place.
“We stumbled upon this gem, or at least I thought it was a gem,” Frantz said. “I said, ‘Why don’t we take a chance to buy it and see if we can turn this thing into our dream house.’”
The Arty family bought the house in 2018, and it was immediately clear that a lot of work needed to be done to make the space even livable. The property needed a full facelift and was lacking in even basic essentials like running water and electricity.
After several months of construction, Jaime began chronicling the progress they’d made in a Facebook group, which she titled “Making over a Mansion.” In addition to posting photos of family members and life events, she also chronicled the changes being made to the house, showing before and after shots of many of the rooms and highlighting the stark contrast between them.


Her Instagram and Facebook pages now boast a collective 44,000 followers from all around the world. Jaime explained that at first, she had intended to post the photos just for close friends and family, until she realized how passionate many people are about old houses and their renovations.
“Once I started posting I noticed that my friends and family were really not that interested,” Jaime said. “It was actually strangers who also like old houses. They’re like old house enthusiasts that love old homes, history and old cemeteries and things like that.”
It was during the renovation process that Jaime found out that their home had not just the potential to be a beautiful home for their family, but that it also had a unique and important local history, which she began adding to her posts. In addition to finding some old portraits from the 1830’s as well as 100-year-old sewing machines in some hidden rooms, she did some digging and learned about the place the house holds in Oyster Bay’s history.
In the late 1600’s George Fox, the founder of the Religious Society of Friends, more commonly known today as Quakers, would give sermons to the citizens of Oyster Bay once a year at the house’s location. Although Fox was banned from giving sermons in most of the early British Empire due to his perceived heresy, Long Island was a backwater at the time with little imperial oversight, so Fox made the journey to the growing hamlet every year to spread the word of God.
In more recent history the house as it is known today was first owned by William Townsend McCoun, a local judge and scion of the local Townsend family, which produced Oyster Bay’s first hero Robert Townsend, a crucial member of George Washington’s spy ring. Jaime was surprised and excited to discover that in addition to his legal work, McCoun was also an outspoken abolitionist.
In the meantime, the house has had a few other historic owners, including Theodore Roosevelt III, son of the famous president. The previous family that the Artys had bought the house from, while not as distinguished as some of the other owners, had lived in the home for three generations, and the final owner had insisted that the new residents would not destroy or fundamentally change the property in a way that would detract from its historical grandeur and beauty.
The Arty family was able to move into the first floor with their three children, Frantz Jr., Fitzgerald and Fallon at the end of 2019, just before Covid hit. While renovations are still ongoing, and the Artys estimate they have roughly 30 percent left to do before the work will be complete. There’s been much interest in the process including when the house was featured in a new Discovery Channel series, “Diary of an Old Home.”
“It’s really amazing what they’ve managed to do with the property,” said Ravin Chetram, a friend and vice president of the Oyster Bay-East Norwich Chamber of Commerce. “To turn the place from what it was into such a lovely home, it’s just remarkable.”
Report an inappropriate comment