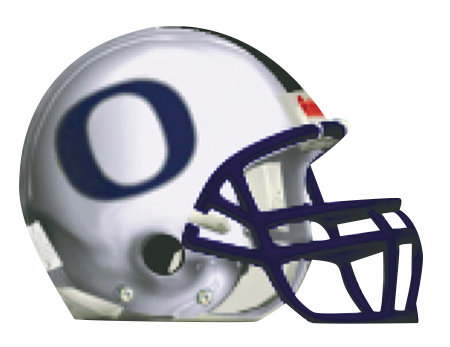 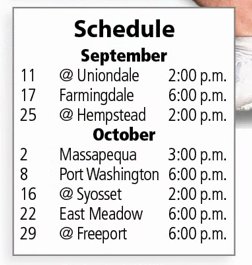 With a roster full of three- and four-year varsity players and coming within a possession of winning a county championship in the spring, Oceanside is the team to beat in Nassau Conference I.

“Our guys are hungry and motivated,” head coach Rob Blount said. “They know what it takes to go deep in the playoffs. Many of them have been to the finals twice and the semifinals three times. We all want to get over the hump and win it all.”

The Sailors, who last captured a county crown in 2017, enjoyed a perfect 6-0 regular season and defeated Syosset in the semifinals before losing a heartbreaker to Massapequa in a thrilling back-and-forth title game. “It was a tough ending and everyone felt bad for the seniors, but the silver lining is we lost with a bunch of juniors and sophomores who are back,” Blount said.

Top-seeded Oceanside returns five All-County selections, including record-setting senior quarterback Charlie McKee. The winner of the Thorp Award, presented to Nassau’s most outstanding player, McKee is within striking distance of becoming the county’s all-time leader in passing touchdowns and passing yards. He has 66 career scoring strikes and 6,746 career yards. Both records are held by Joe Capobianco, who had 100 passing touchdowns and 8,013 yards for Lawrence. “Charlie is the best all-around player I’ve coached here,” Blount said of the Stony Brook commit. “He holds every school passing record there is but always puts the team first.”

McKee bulked up following his sophomore campaign and added a running element to his game, resulting in 488 yards and 12 touchdowns on the ground. He’ll once again be a dual threat, Blount said, with the majority of other carries likely going to last season’s top pass catcher in Nassau, senior Michael Mecca. The All-County wideout/safety had 44 receptions for 462 yards and 6 touchdowns. “We don’t have a true tailback right now and Mecca is a big-play guy so he’s going to get the ball a lot,” Blount said. Senior Ronnie Kraemer is another All-County receiver/safety who had 29 grabs for 367 yards and 3 touchdowns to go with a couple of interceptions on defense. Seniors Dan McCormick and Nick Ebel are also part of the receiver corps and serve as starting cornerbacks.

Three starters return to the offensive line, and the two vacated spots appear to be filled heading into the opener at Uniondale. Senior All-County lineman/linebacker Joe Broderick is moving to left tackle to protect McKee’s blind side and is a throwback player who enjoys the physicality of the sport. Senior Anthony Corvino returns as the starting center following a solid season, and junior Michael Furst is back at right tackle. Senior Alvin Lugo and junior Peter Staltare are expected to take over as starting guards as well as rotate on the defensive front.

The linebacker group could set the tone on defense, Blount noted, with Lyson and Broderick on the inside, and seniors Jack Hickam and Xavier Miller on the outside.

Blount said he “likes the balance” of the schedule, which includes home games against defending county champion Massapequa, the No. 2 seed, and Farmingdale, the No. 4, within the first four weeks.