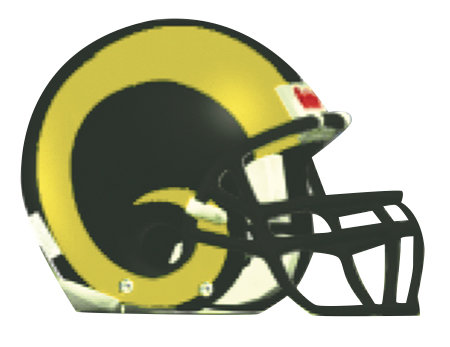 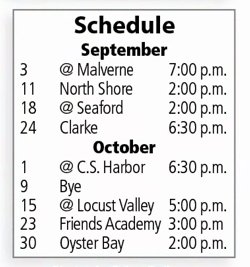 As the No. 6 seed in Nassau Conference IV, West Hempstead will look to flip the script on a handful of narrow defeats from last season and get into the playoffs following a winless campaign.

“We lost three games by one score and probably about five plays made the difference between going 0-5 instead of 4-1,” head coach Dom Carre said. “We have a pretty tough schedule and play each of the top four seeds. We’ll try to add a week of intramurals to help us get ready for the first game since we don’t have room to scrimmage.”

The Rams, who consistently competed in 7 on 7s during the summer and had a solid turnout in the weight room four days a week, were expected take the field for the Sept. 3 opener at Malverne with anywhere between 22 and 27 players. They’ll also face each of the top three seeds in September, hosting top-seeded North Shore and No. 3 Clarke while traveling to No. 2 Seaford. “I’m not really concerned about the numbers because we’re always in that boat,” Carre said. “Our numbers weren’t down like a lot of teams last season. We were in the usual neighborhood.”

West Hempstead’s JV won five of six games and Carre said he’ll be counting on some first-year varsity performers to fill starting roles, none bigger than at quarterback with junior Corey Pierre. He was the JV starter and an important reason for its success. “He’s a smart, hard-working kid who fits our offense perfectly,” Carre said. “In our offense the quarterback needs to be one of four running options. Corey can run but he also has a nice arm when we need to throw. He showed a good grasp of things during 7 on 7s.”

There will be no shortage of experienced ball-carriers, Carre noted. Juniors Michael Abiaoun, Jonathan Balthazard and A’Lorenz Chapman, as well as senior Zadrian Budhoo, will all contribute as returning varsity starters. “It took a while for the sophomores we had last season to get used to the speed of varsity football,” Carre said. “It’s nice they’ve got a bunch of games under their belts now. Typically, we have everyone getting between 8 and 10 carries. It’s nothing we plan on. With our offense, it just turns out that way because we spread things around.”

Abiaoun is a throwback player with a lot of energy, Carre said, and loves contact. He’s a fullback and linebacker who grinds out tough yards but also has the ability to break long runs. On defense, he goes hard to the ball and tries to make every tackle. Balthazard is a tailback/linebacker who can shed tackles and will be one of the Rams’ X-factors if he takes a step up, the coach noted. Chapman, another running back/linebacker, is extremely athletic and has breakout potential. Budhoo brings all the physical tools, Carre said, and showed signs of what he can do last season in a 48-40 loss to Clarke with five touchdowns, including a 53-yarder, and 158 yards. He’ll play in the secondary on defense along with junior Jurell Hall.

If the offensive front comes together, the Rams expect to be much more consistent than last season when they scored 13 points or fewer in three games. Senior Torry Marshall is a third-year, two-way lineman who brings a combination of size and experience. Senior Mariano Torres returns at center, bringing experience to a key position. Others in the mix to start include juniors Dan Clark and Diego Quijada, as well as sophomore Giancarlo Gomez.

West Hempstead’s defense will be under the direction of former Clarke head coach Tim O’Malley.