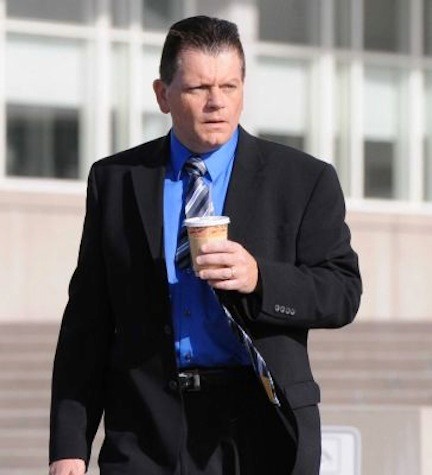 Louis Abate, the former director of the Nassau County Office of Housing and Community Development, leaves court after being sentenced to 18 months in jail.
Courtesy U.S. Attorney for the Eastern District
By Howard Schwach

Louis Abate, the former Fiscal Director for the Nassau County Office of Housing and Community Development, was sentenced to 18 months in jail by a federal court judge on July 22, after pleading guilty to theft of government funds in relation to a housing scam that took funds earmarked for Section 8 housing in Island Park.

According to the federal charging document, Abate, 40, of North Massapequa, stole more than $120,000 in federal housing benefits intended for low-income Long Islanders in need of housing financial assistance.

Qualifying low income families are eligible to receive Section 8 Program rent subsidies under a federal program funded by the United States Department of Housing and Urban Development. The Nassau County Office of Housing and Community Development, which Abated headed, is the administrative entity responsible for implementing and monitoring the programs and grants funded by HUD in Nassau County, including Section 8 grants.

During his guilty plea allocution, Abate admitted that between May 2009 and August 2011, he stole more than $120,000 in federal rental subsidies from a Section 8 program that he oversaw, which serviced individuals residing in Island Park. Abate admitted further that in order to accomplish his theft, he created a fictitious landlord with no associated tenant, and for more than two years diverted the Section 8 benefits for this supposed landlord to a bank account he personally controlled. Abate was successful in concealing his fraud from the NCOHCD by systematically altering various accounting records to remove any reference to the diverted funds. During this period, Abate illegally paid himself approximately $5,000 per month – more than three times the monthly amount of federal Section 8 subsidies received by any single participating landlord in the Island Park area during that time.