Speakers will highlight suicide prevention for at Oceanside schools next month 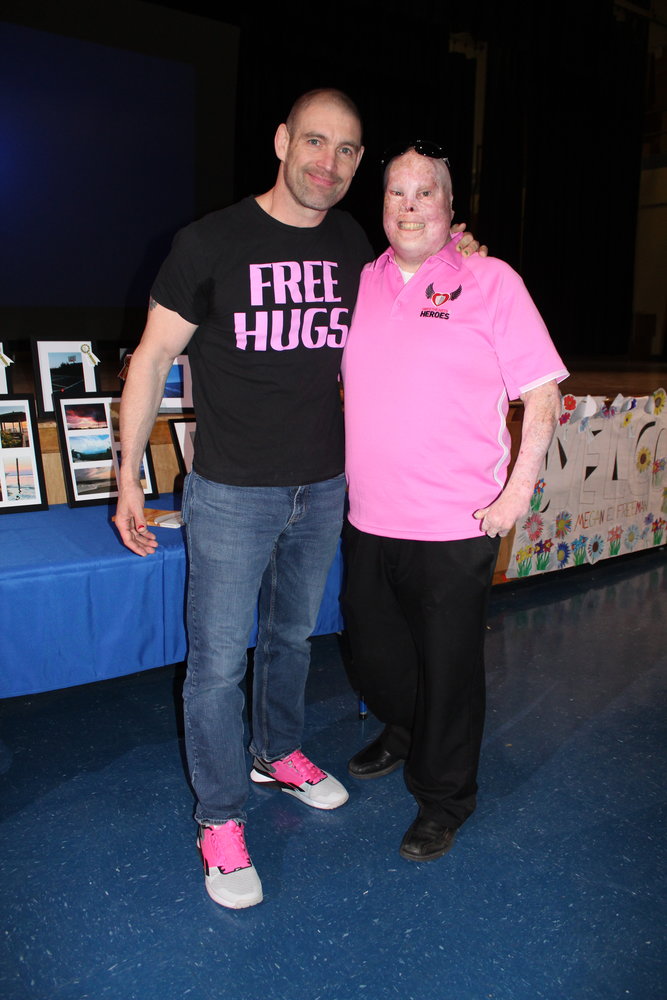 Sweethearts and Heroes speakers Tom Murphy and Rick Yarosh taught acceptance and understanding to educators on Superintendents Day. They’ll be back to talk to Oceanside students in December.
Karina Kovac/Herald

We need acceptance for survival. We are pack animals. We need each other. We need to be part of a group.”
Sweethearts and Heroes
Suicide statistics

-Four out of five teenagers who attempt suicide have given clear warning signs.

-According to the Centers for Disease Control and Prevention, for youth between ages 10 and 24, suicide is the third-leading cause of death.

-Kids who are bullied are more than twice as likely to consider suicide, according to a recent study in the Journal of the American Medical Association.

-The suicide rate for veterans is 1.5 times higher than that of the general population.

-In 2021, researchers found that 30,177 active-duty personnel and veterans who served in the military after 9/11 died by suicide, compared with 7,057 service members killed in combat over the same 20-year period.

Rick Yarosh was sitting in a restaurant about 15 years ago after being cooped up in his home, terrified of being seen by the public. He had picked a table with no one near, to save other diners from having to look at his face, which was badly burned in an accident in the Iraq War in 2006. It was quiet for a few minutes, until a family sat down and a little girl started staring at him in fear.

“Go say hi,” her grandfather, sitting next to her, said, noticing the quiet exchange of looks between the two. “Go say hi to him,” he said again.

When the girl, who was 5 or 6, got halfway to his table, Yarosh said, “Hey, how are you doing?” and she stopped dead in her tracks and ran back to her grandfather. It was as if she had seen a monster, Yarosh recalled. But then she did something unexpected that would change his life.

“She dumped a bucket of hope on me, and when she did that, she changed my life forever,” Yarosh told educators gathered at Oceanside Middle School on Superintendents Day — Nov. 8 — as part of Sweethearts and Heroes, an initiative to prevent bullying and teenage and veteran suicides. Yarosh needed what the organization calls a “sweetheart” — someone who carried hope and friendliness with them, dispersing it to those in their life that need it.

Yarosh and Tom Murphy, his speaking partner in Sweethearts and Heroes, a Vermont-based organization, will bring the program to Oceanside students next month.

“That little girl had no clue what she was capable of, no clue that she carried something around with her every day that she could give to other people and change their lives with it,” Yarosh said. “She had no idea, and neither did I. I didn’t recognize that, but that was the day it all changed for me.”

Yarosh, who lives in Vestal, New York, near Binghamton, needed that acceptance after a fiery accident in Iraq on Sept. 1, 2006, seared the skin off his face and badly burned the rest of his body.

Patrolling as he had done many times before, he sat in the turret of a Bradley, a small tank, when an improvised explosive device buried in the road detonated as the tank rolled drove over it.

“As soon as that Bradley was on fire, so was I,” Yarosh recounted, explaining that the fuel tank was located next to the turret. Jumping 10 feet blind because there was “fire actually covering my eyes,” he landed on the ground and broke a leg.

He did the “stop, drop and roll” that military personnel practice for the eventuality of catching fire, but quickly discovered that “It doesn’t work,” Yarosh said. “It works if your sleeve is on fire, your shirt is on fire. It does not work when your entire body is engulfed in flames. So, I rolled around on the ground, and all I was doing was setting the grass on fire.”

At that moment, he said, he did something that was the “biggest regret of my life.” He gave up and accepted that he was going to die. “I gave up that hope that is so important to every single one of us, because it’s what keeps us moving forward every single day,” Yarosh said.

Everyone can reach that point in their lives, when the things they love to do have become too difficult, and “we say, that’s just too hard, I’m not going to do it anymore,” Yarosh said, his voice filled with emotion, but “if you lose hope in that situation, you’ll never find out the results of getting through it. You’ll never get to see the reward that comes from the end of that difficult thing. And the more difficult something is, the bigger the reward in the end, the bigger the reason to get through that difficult thing. We have to hold on to find out what those possibilities that exist for our future are.”

Yarosh and Murphy will reiterate this lesson, on accepting others and persisting past mental blocks that can lead to suicide among children and veterans, when they return to the district next month.

Everyone carries hope within them, Yarosh said, “and it becomes a choice of whether or not we give it to those people that we know are dealing with difficult things, that we know are struggling. We need acceptance for survival. We are pack animals. We need each other. We need to be part of a group.”

It will also be good for district staff, he added. “The staff will walk away from this thinking that that they can — just by talking to kids about this, they can really change their lives and be available for them. The most important thing is what he said at the beginning, which is (that) just communicating with a kid is being there for the children.”

“It was very impactful and inspiring, really,” OMS social worker Lynsey Wolfson said, adding, “I think it’s really important for the staff to also remember that a lot of us have been here for a long time, and kind of reinvigorate them to reconnect with their students in a more personal way.”