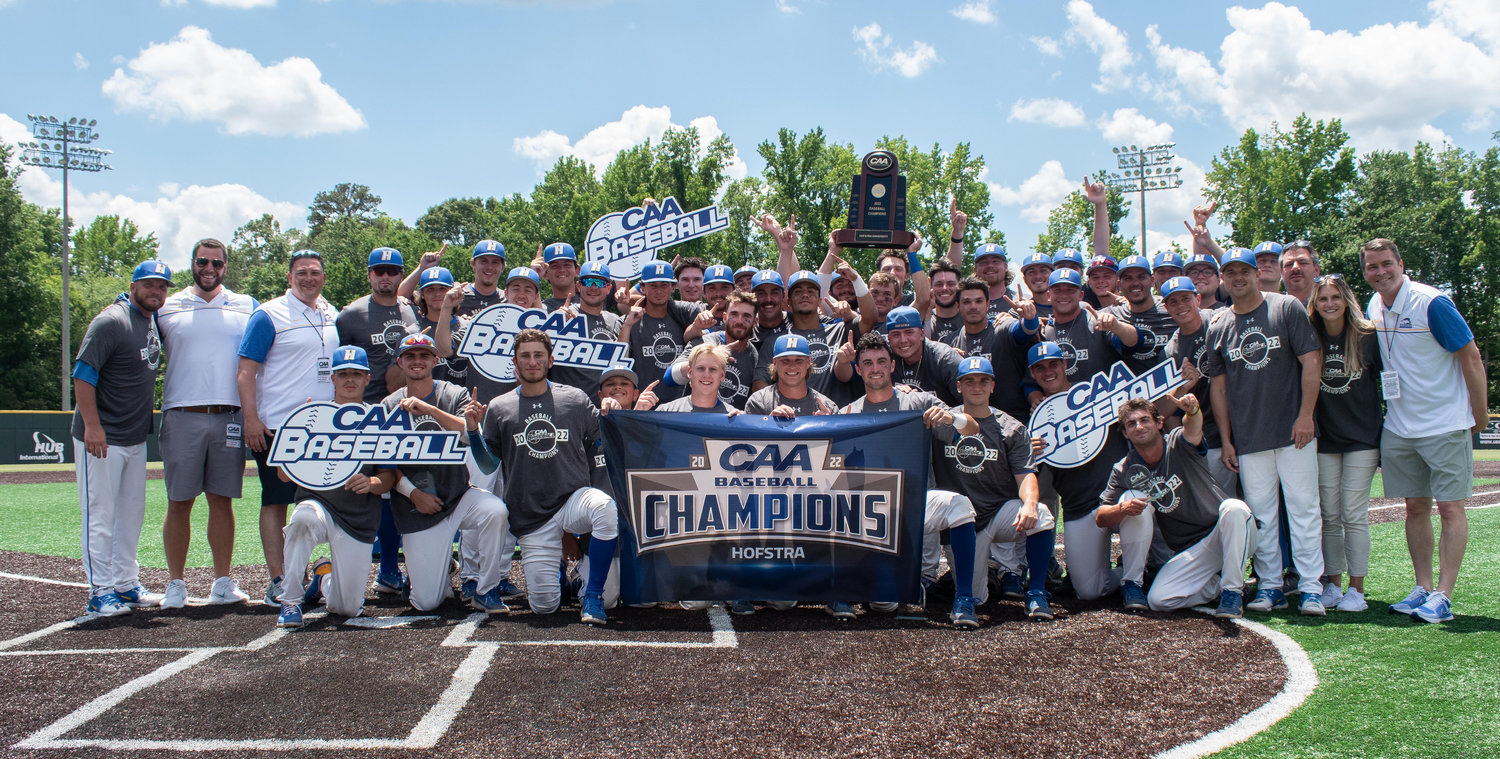 When Anthony D’Onofrio first committed to the Hofstra baseball team as a sophomore at Wantagh High School, he saw potential for big strides for a local program he grew up following.
Six years later, D’Onofrio was a catalyst in Hofstra reaching the NCAA Tournament for the first time in school history after capturing the Colonial Athletic Association (CAA) title with four straight wins in the double-elimination tournament Memorial Day weekend. The accomplishment was made even more improbable by the fact Hofstra was picked in the preseason to finish dead last in the nine team CAA.
“To be ranked last in the preseason and finish in third place in the regular and go 4-0 in the playoffs and shock the whole conference really felt great,” said D’Onofrio, who hit three home runs this season as a senior center fielder including a leadoff homer in Hofstra’s 7-6 win against Northeastern on May 29 that clinched the CAA championship. “It was a crazy experience.”
D’Onofrio, who will return in 2023 as a graduate student for an extra year of eligibility due to losing most of the 2020 season because of the Covid-19 pandemic, ignited Hofstra’s CAA tourney run with an infield single leading off the bottom of the ninth-inning before scoring the winning run on a sacrifice fly by Steve Harrington in a 4-3 win against Elon. The Pride kept the momentum the next day with a 4-3 victory in 10 innings versus second-seeded Elon and on May 27 and then knocked off Northeastern 8-7 in extra innings the next day on a Santino Rosso RBI double in the bottom of the 10th to advance to the CAA finals stage.
Hofstra made history in achieving the school’s first conference baseball crown with its third walk-off win of the CAA tourney when Ryan Morash was hit by a pitch with the bases loaded to score Brian Morrell and cap a 7-6 victory and set off a massive celebration.


“To think that the program had never won a conference championship in its existence going back to 1938 is really amazing and I don’t know if any of us have realized how big that is,” said first-year Hofstra head coach Frank Catalanotto, who enjoyed a 14-year Major League Baseball career with the Detroit Tigers, Texas Rangers, Toronto Blue Jays, Milwaukee Brewers and New York Mets from 1997 to 2010. “It helps put the program on the map.”
The CAA championship gave Hofstra some national exposure when its name was called during the NCAA Selection Show that aired on ESPN2 on Memorial Day. The Pride were sent to an NCAA Regional at North Carolina where it took an early lead on the ACC champions before ultimately falling, 15-4. Hofstra’s magical season then concluded the next day with a loss to Georgia in a nationally televised game on SEC Network.
Hofstra’s NCAA Tournament run enabled a number of locals to experience a big-time college baseball atmosphere. The Pride’s roster includes 10 from Nassau County in D’Onofrio, Anthony Fontana (Wantagh), Michael Florides (Glen Cove), Luke Napolitano (Rockville Centre), Mike McKenna (Farmingdale), Matt Pelcher (Merrick), Frankie DiMartino (Bethpage), Chris Keenan (Seaford) and Danny Kelleher (Rockville Centre).
Catalanotto, who previously led New York Tech to the Division II College World Series in 2019 before the school suspended athletics in summer 2020, said bringing Hofstra to the NCAAs ranks very high on his list of accomplishments, especially since he never experienced the MLB postseason. After a breakthrough season, the expectations will only increase for 2023.
“Now the target is on our back,” Catalanotto said. “We set a high standard and luckily these guys have bought in.”