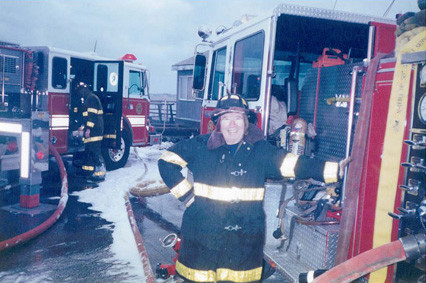 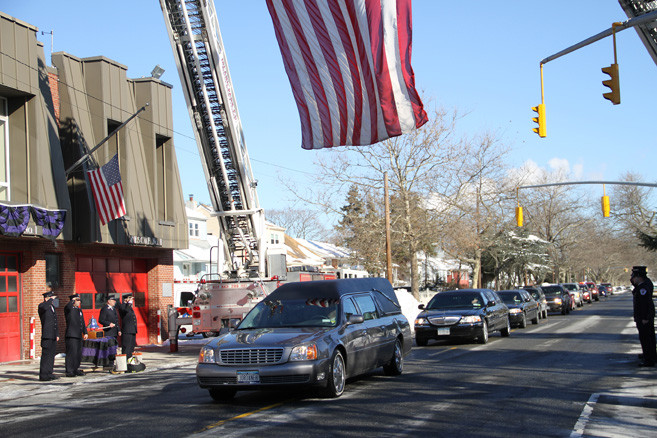 Firefighters saluted as M. George Caracost's funeral procession passed in front of the Island Park Fire Department fire house. Caracost was an IPFD member for 70 years and helped institute many changes in the department during his tenure.
Susan Grieco/Herald
Previous Next
by Alex Costello

M. George Caracost, a lifelong member of the Island Park Fire Department and former Village Trustee, died on Jan. 7. He was 89.

Caracost served as a life guard at the Island Park Beach in the 30s along with his good friend, Victor Nittolo. The two also joined the IPFD at the same time in the late 30s.

In 1943 Caracost joined the Navy and fought in the Pacific theater from then until the Japanese surrendered in 1945.

After the war, Caracost attended Adelphi University where he majored in electrical engineering. He graduated and got a job at Pickering and Company in Plainview, designing hi-fidelity stereo equipment.

He is remembered as a kind, caring man that put his family and the safety of others at the forefront of everything he did.

“We all knew George,” said Island Park Mayor James Ruzicka. “He was quite active in our community.”

In addition to being a member of the IPFD, Caracost was a captain and a lieutenant in the Hose Company. In 1951, he was elected Chief of the department — the youngest at the time. He was also a fire commissioner many years ago when Island Park had commissioners.

Up until about 10 years ago, Ruzicka said, Caracost could still be seen responding to fires and pulling hose with the rest of the IPFD. When he started to feel he was a little too old for that, he would still respond to fires, helping to direct traffic. “Anything that could help, he would do it,” said Ruzicka.

“He took [my brother and I] down to the firehouse all the time,” George said. “It was like growing up there... It was pretty cool as a kid having access to all the fire trucks.”

George said his father never encouraged him or his brother, Gregory, to become fire fighters or to enlist. “I think from his experiences in the war, I always got the feeling he wanted us out of harms way,” George said. “He pushed us to his other love, which was aviation.”

Caracost served on two carriers in the war: the USS Charger and the USS Saratoga, working as an aviation machinist’s mate and was heavily involved in aircraft maintenance. He loved planes, although he never learned to fly them. Both of his sons now work in the aviation field — George for Saab in Virginia and Gregory for Northrop Grumman here on Long Island.

George said his father was a perfectionist, and held other people to the same high standards that he held himself. If he saw fire fighters rushing into buildings without the proper equipment, he would pull them out before they got hurt. He was also responsible for pushing the envelope for the IPFD’s technology, advocating to train them as paramedics as well as making sure they had the most up-to-date gear.

“He was passionately worried about the men and the women at the fires and making sure they had the best training and the best equipment,” said George. “I heard many stories of people getting thrown of a building just in time before something happened that they may not have survived.”

George said that his father’s strong conviction and sometimes stubborn attitude made it so that people didn’t always like him. But those that knew him were great friends. Victor Nittolo said Caracost was one of his best friends, and fondly remembered the time they spent together in Island Park, especially their time as life guards.

“The years we spent doing that and being with the fire department were probably the best of my life, and George’s too,” Nittolo said. “We had a fun time. I’m so happy he was part of my life and I was part of his.”