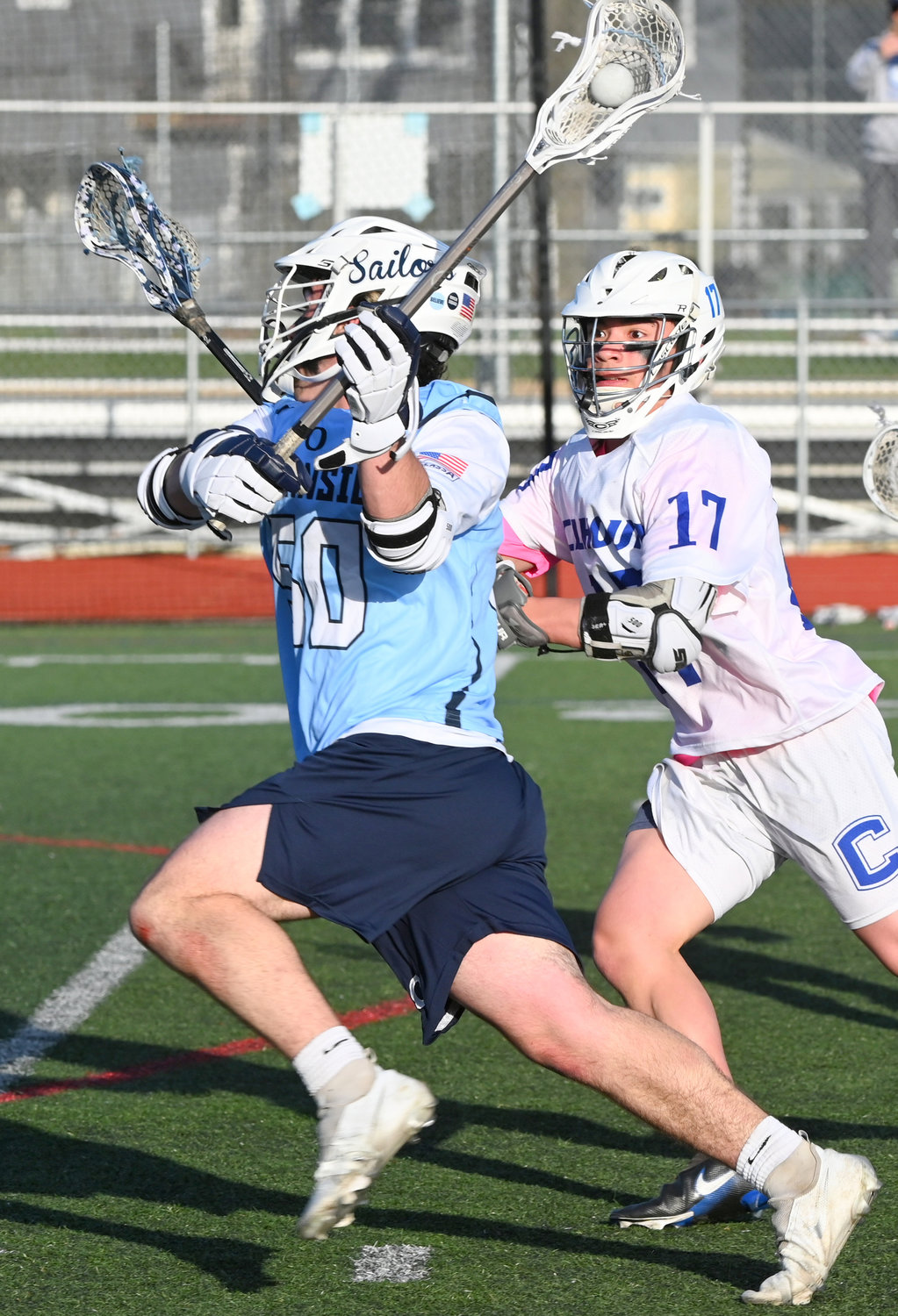 Senior Xavier Miller, left, is part of a strong group of two-way midfielders for the Sailors, who seek a signature win down the stretch.
Donovan Berthoud/Herald
By Tony Bellissimo

Oceanside’s first measuring stick against one of Nassau County’s Class A championship contenders didn’t go according to plan, but coach Rob Blount’s squad has three serious challenges ahead to respond.
Following a pair of wins to open the Conference 1 schedule, the Sailors suffered their first-ever shutout defeat in four years under Blount on April 27, falling 8-0 at home to preseason top seed Farmingdale.
“It was disappointing because we wanted to show we can compete against anyone in the conference,” Blount said. “It’s one of the few years there’s no Goliath in Class A. Our season has been a tale of two teams so far, but we feel pretty good about where we’re at heading into May.
“We’re right in the thick of things,” he added. “We’re doing things the right way and doing a better job of playing team lacrosse. We just have to do it at a higher level and get that signature win within Class A.”
Matchups with Massapequa, Port Washington and Syosset — the three other teams seeded ahead of Oceanside — remain on the docket. The Sailors (6-4 overall, 3-1 in conference games) will look to use momentum from last Saturday’s dominant victory over Freeport that saw attackers Ronnie Kraemer (4 goals, 3 assists) and Vincent McCabe (6 goals) combine for 13 points and midfielder Liam Hannon notch a hat trick.


Kraemer, McCabe and Dylan Nardone formed the starting attack last spring and returned as a cohesive unit, Blount said. Through 10 games, Kraemer was leading the Sailors in goals with 35, followed by McCabe with 28, while Nardone has dished out a team-high 14 assists to go with 8 goals. “The way our offense is structured, the attack is going to see the bulk of scoring chances but a lot of the offense is generated from the midfield,” Blount explained. “These guys are all unselfish.”
Blount said the starting midfield of senior Xavier Miller and juniors Nicky Cairo and Jake Perinchief are counted on heavily to produce at both ends of the field. They all have balanced numbers. Miller has 6 goals and 8 assists, Cairo 9 goals and 16 groundballs, and Perinchief 8 goals and 5 helpers. Other keys to the midfield are senior Michael Mecca, who sparks the transition game, Hannon, a senior with 10 points, and Cole Parker, a junior who has won 67 of 135 draws.
“Cole is a tough competitor and holding his own on the draws,” Blount said of Parker, who was instrumental in Oceanside’s wild 14-13 non-league victory over MacArthur, the No. 2 seed in Class B. “We want to see him closer to 60 percent in the big games we’ve got coming up,” he added.
In the defensive zone, senior Brian Brennan is a groundball machine (24) and also leads the way in forced turnovers. Seniors Scott Madden and Ryan Denni, along with junior Matt Amitrano are also workhorses in front of senior goaltender Ryan Collins. Coming off an All-County campaign, Collins continues to be rock-solid, Blount said, and entered May with 78 saves.