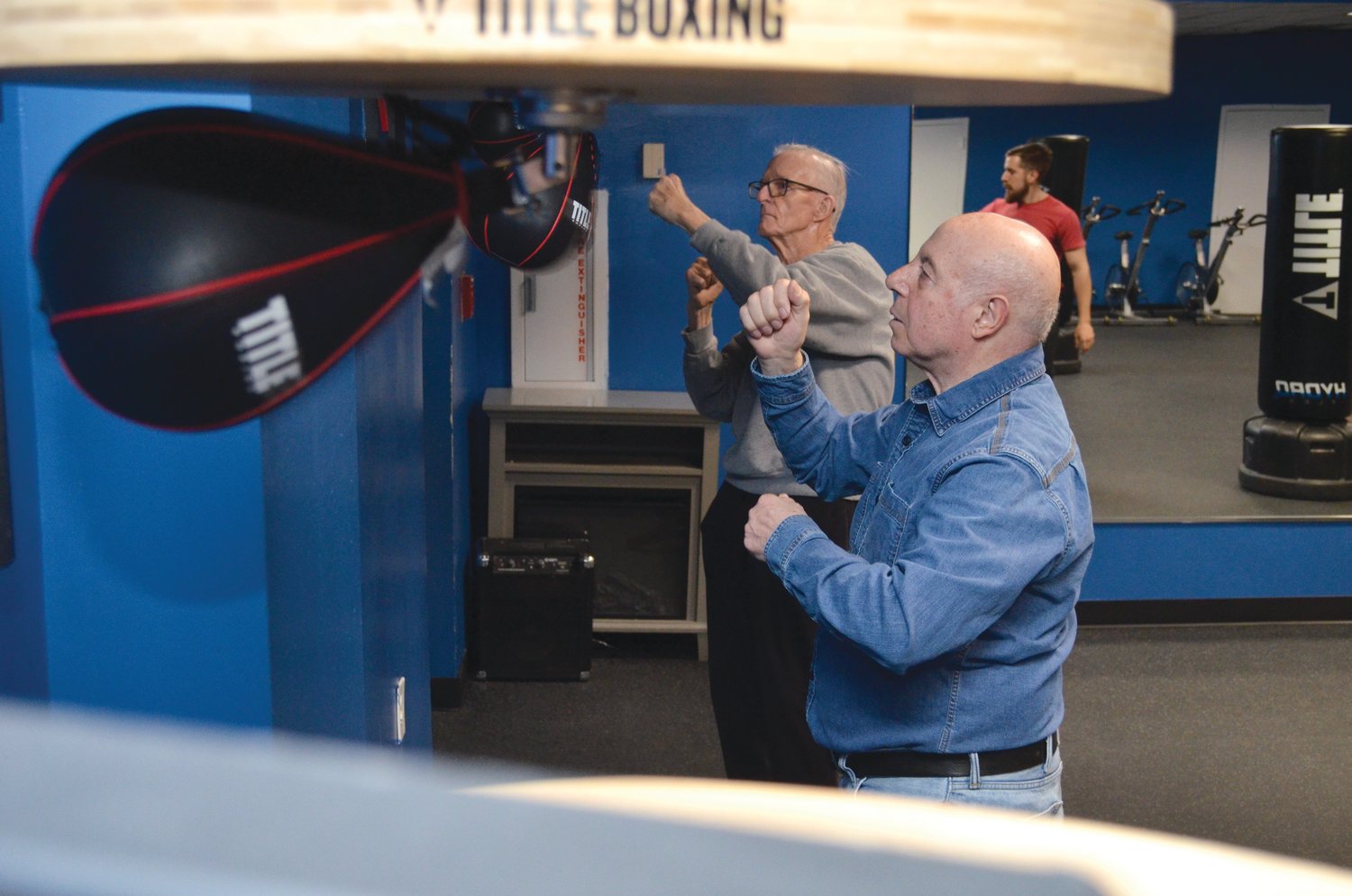 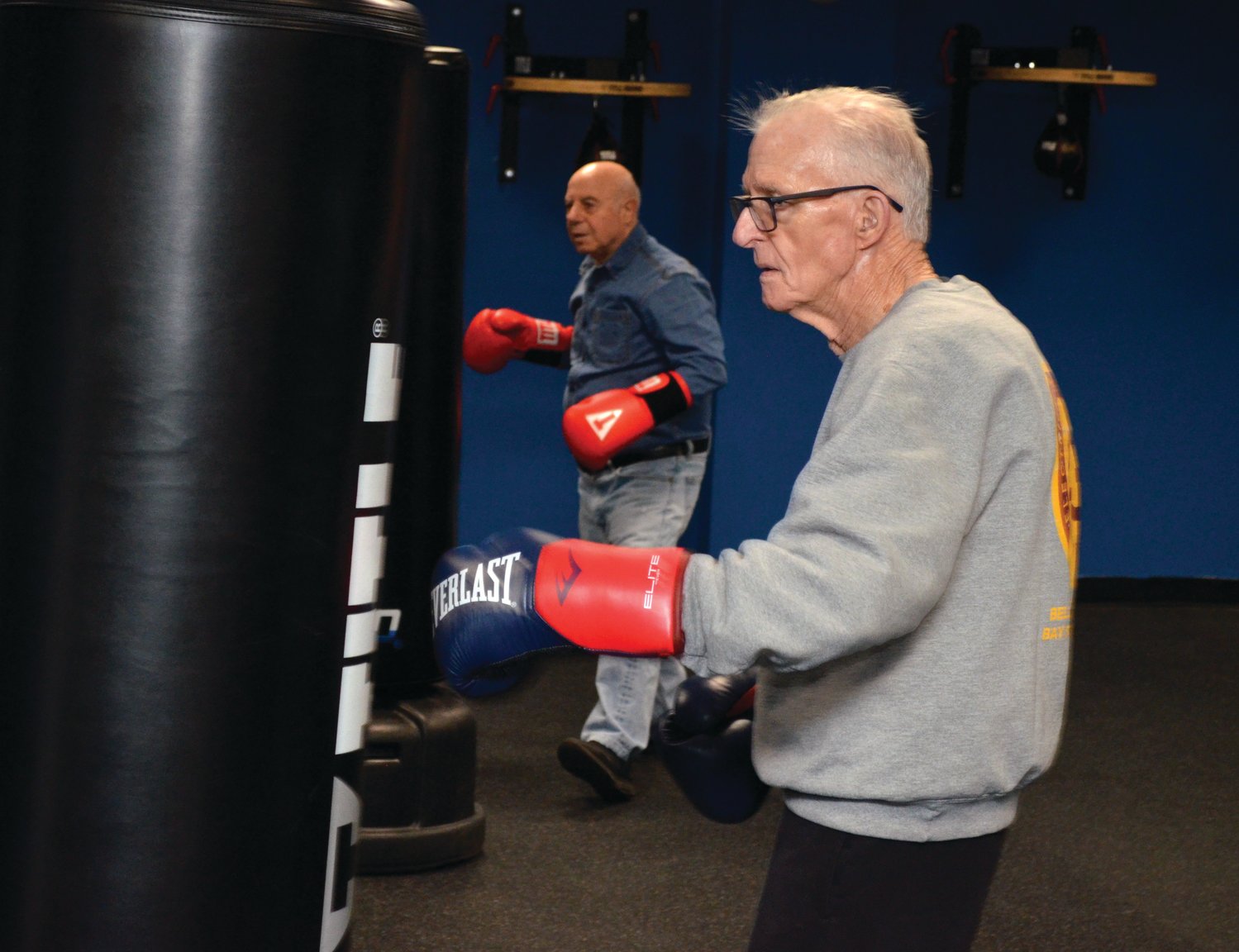 The new JCC program is one of many addressing Parkinson’s disease.
Tim Baker Photographer
Previous Next
By Kepherd Daniel

Adding to its collection of activities, the JCC recently announced a new program, which was inspired by its Boxing for Parkinson’s program. Since April is Parkinson’s awareness month, the boxing program has been helping those with Parkinson’s stay active and cope with the disease.

The new program includes boxing with disabilities of all kinds and a boxing boot camp open to all members of the public. The Boxing for Parkinson’s program set the stage for the newly expanded boxing programs.

“We launched this in March and we invested $1,000 to get the equipment that was needed,” said Jackie Ruiz, director of wellness at the JCC.

“We were offering the Rock Steady program, which is big for Boxing for Parkinson’s,” added Ruiz. Rock Steady Boxing enables people with Parkinson’s to fight their disease by providing non-contact, boxing-style fitness programs that improve their quality of life.

While the program was born from a desire to improve upon the previous Parkinson’s boxing program, Ruiz said, “We realized that there was a demand for all the populations, including people with disabilities as well as general fitness.”

The JCC has also applied for a grant to fund more boxing programs. “We are looking to increase the number of People with Disabilities classes,” said Ruiz. “Hopefully if the grant gets approved, then we will be adding younger-age children classes for boxing and eventually, for the general population. We’d love to add teen boxing classes.”

Constantinos Labrinos, assistant director of wellness at the JCC who teaches every single one of the boxing classes, has been a personal trainer for eight years. Labrinos, who has a nutrition and Exercise Science degree, taught himself how to box.

“I really try to gauge everybody’s interests but also how quickly they move,” Labrinos said. “But with Parkinson’s, it’s slower and we work with that. I tell people to give me feedback and if there is anything they want me to incorporate, but they think it’s great.”

One woman, who lives in Merrick, heard about the Boxing for Parkinson’s program at the JCC and quickly got her father to begin sessions. “My dad lives in Florida, and he’s just up for the holiday and he’s taken the Rock Steady class in Florida for years,” she said. “He was doing that for years down in Florida and Covid (struck). So now that he was up, this worked out perfect. The whole key is to stay active.”

“A lot of them heard about the Rock Steady, and I teach them the benefits and the technique and give them a slow intro to it,” said Labrinos. “Then they start to really like it. It’s high energy and they get a good workout.”

Many participants have been enjoying the program and the guidance that Labrinos has provided. “He’s very patient, and you have to be,” said one woman. “We’re senior citizens, and we all have Parkinson’s and he’s very good. It helps and we can get some exercise.”

JCC is part of the NYIT team, which is taking part in an annual Parkinson’s unity walk in Central Park in May and will also lead a Tai Chi demonstration. Gloria Lebeaux, director of Social Work Services at JCC, discussed the evolution of the Boxing for Parkinson’s program and the many programs the JCC offers for people with Parkinson’s.

“Pre-Covid, we did boxing for PD,” Lebeaux said. “It wasn’t as fancy as this because we didn’t have all the fancy equipment. When Covid hit, we immediately pivoted right away to all virtual but we didn’t stop.

“We have a Dance for Parkinson’s disease program, but these programs are not just fitness-oriented,” she added. “We’ve had that, we also do Tai Chi, as well as a balance class.”

The JCC started a monthly zoom presentation, which has continued to grow and includes different neurologists, doctors and therapists who talk about Parkinson’s every month.

With how well received the program has been, the JCC is looking to expand in the near future. “We’ve already gotten requests to add another day,” said Ruiz. “Hopefully for May or June, we will be opening up probably another general population class as well as the other programs as well. We’re looking to hopefully continue to grow it.”