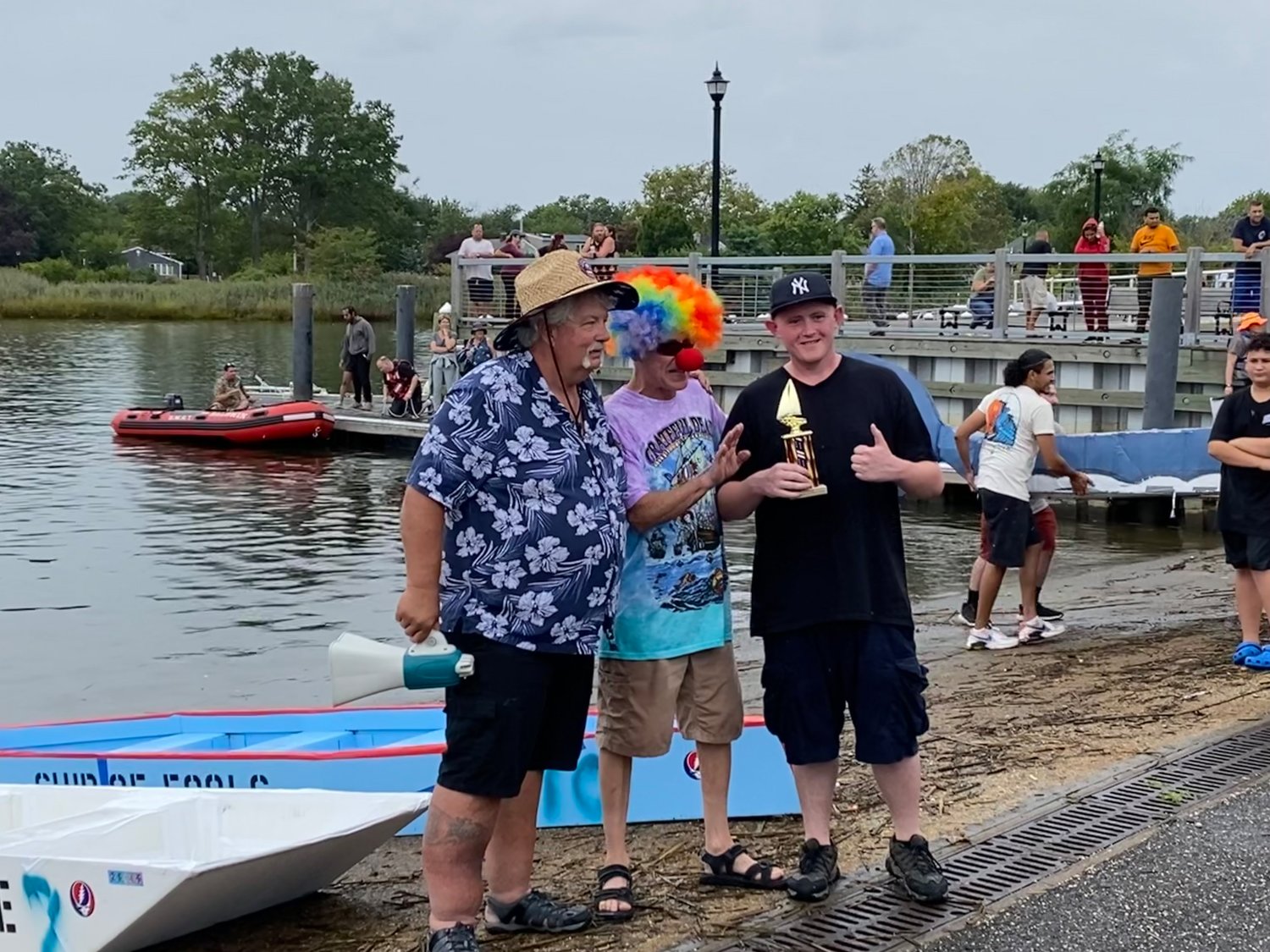 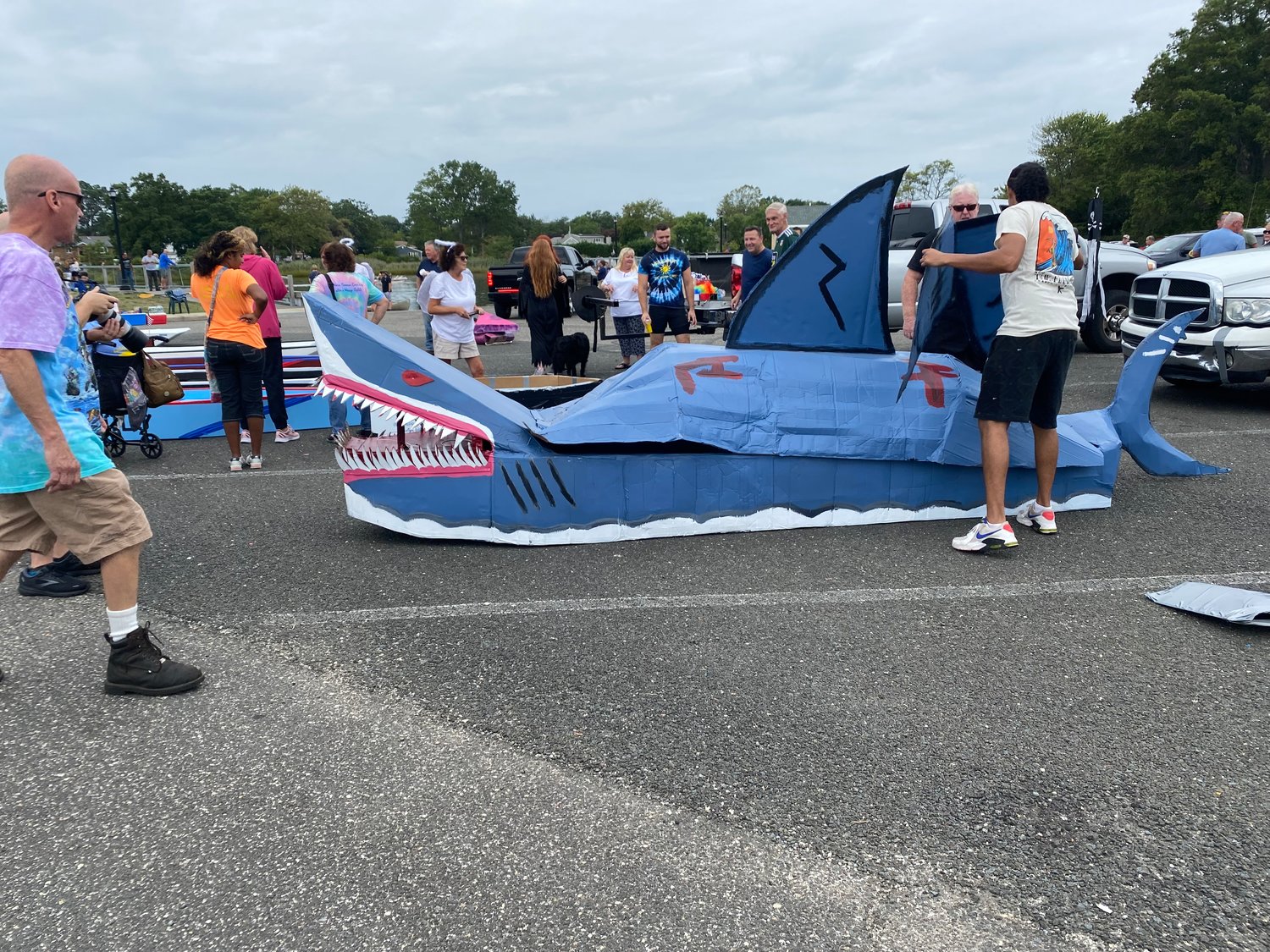 One of the many ornate and unique boats present at the boat race, this one is designed as a shark.
Photos courtesy Andre Silva
Previous Next
Immersive Journalism

This reporter manned the middle of the boat to row alongside four other teammates: Monica Cichose, Joan Shcromm, Jackie Schromm, and Brian O’Connor. This reporter and his team came in fifth place, but can personally attest to the fun and community he enjoyed on Sunday.

“They allowed me to take part in their race, and I understood that this community is welcoming, warm-hearted and most of all, know how to have fun,” said Silva.

Family and friends came together to race cardboard contraptions and share a laugh at the Baldwin boat ramps last Sunday.

For over 25 years, John Cools, organizer of Baldwin’s Cardboard Race and Baldwin resident, hosted the Baldwin Cardboard boat race every year except for 2020, when the Covid-19 pandemic started.

This year Cools invited swathes of Baldwin residents to come together and participate in the boat race. He said he marketed the event by word of mouth and posting flyers in local stores. He said this year he took out six ads and posted all over social media. Luckily, this strategy paid off because over 100 people came out to support and socialize with their community.

Cools did not start this event, but he does carry the torch. He said the event initially started as a fundraiser, but is now just a fun time. He said he took over the event when the previous organizer Ed Fallon — a Baldwin Harbor resident and retired city police officer — moved away, he took over.

“He used to hand make the trophies. He would take old scraps of metal and weld them together. The trophies were like a piece of artwork,” said Cools. “I cant do that so I go to the trophy store.”

Prior to the race, Cools and his organizers orchestrated a moment of silence for the victims of the 9/11 attacks. This was followed by an announcement that the race would soon commence, and all participants began to lift their boats to the water.

Trista Bercarich, a 9/11 survivor, lived in Manhattan for nine days before the events of September 11, 2001. She said it was her freshman year of college at Pace University. Bercarich came out to the boat race to distract herself from that traumatic day.

“It was a pretty tough day for me. To see how the world is so catastrophic from such a young age and when I was on my own,” said Bercarich. “To me this event is perfect for today because we’re celebrating community and it is a perfect distraction to see everyone together.”

Bercarich said this event put a positive spin on what would normally be a tragic day.

Steve Grunwald, locally known as ‘Cardboard Steve,’ created seven cardboard boats this year, which took him about five weekends to construct. Grunwald is known as Cardboard Steve because he builds the majority of the boats at the race and will even create custom boats for others. Dressed as a clown, Grunwald captained the boat named Ship of Fools.

“It’s the most fun day of the year. When you’re in that boat its like your 12 again goofing off with your friends, said Grunwald. “Remember how hard you used to laugh where your sides would split. You can’t laugh any harder.”

The Ship of Fools was the first place winner of the boat race this year. Grunwald’s boat included former county executive Laura Curran.

The fire and sanitation department were also invited to watch and join in the festivities, and provided essential services to the event. The fire department brought two safety boats for anyone who fell of their boat, and sanitation services were available to clean up afterwards.