More than 100 attend, 10 months after vandalism 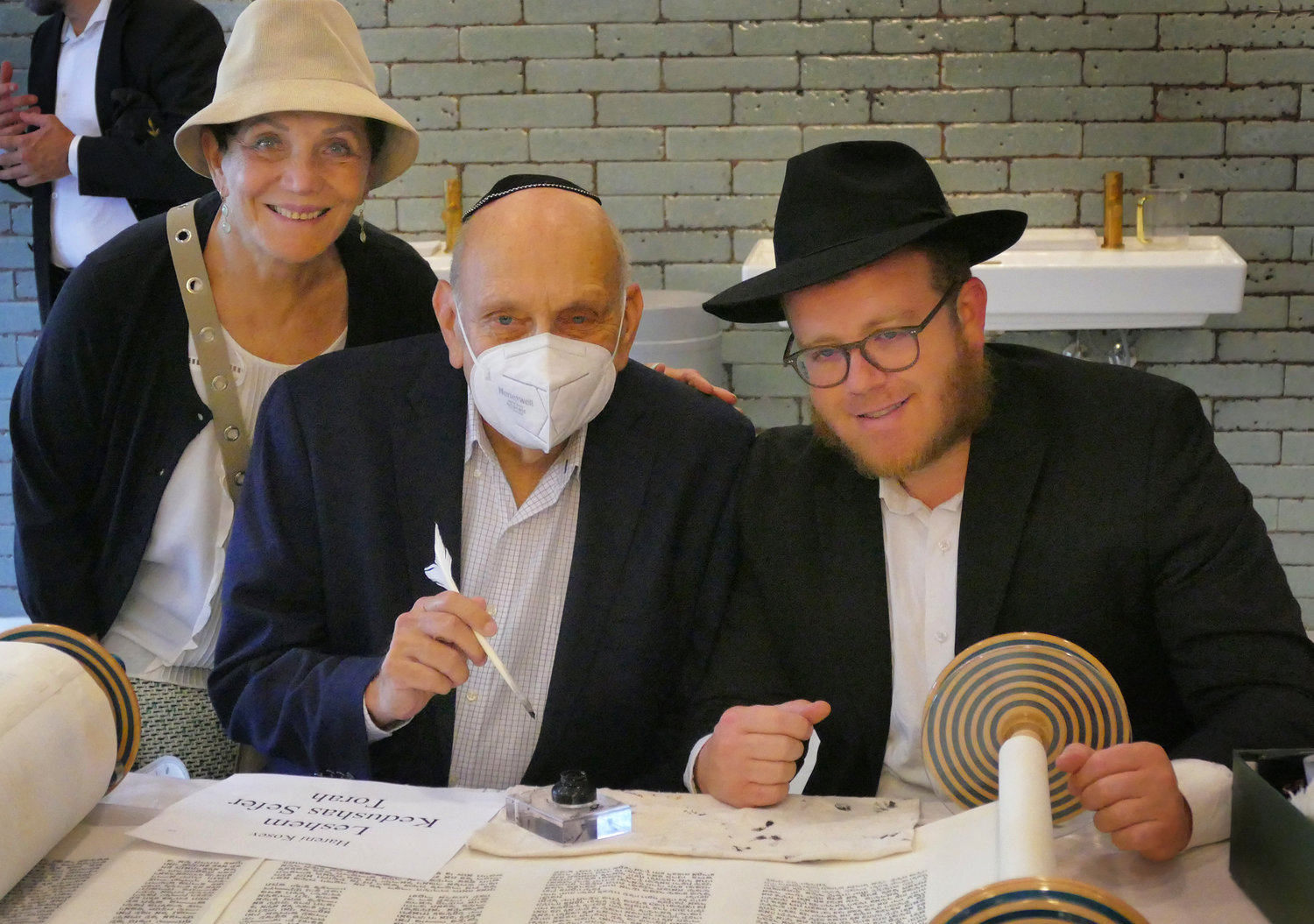 Elaine and Norm Brodsky, who made a donation to acquire a second torah, looked over the holy scroll with Assistant Rabbi Yechiel Winfeld.
Joe Abate/Herald 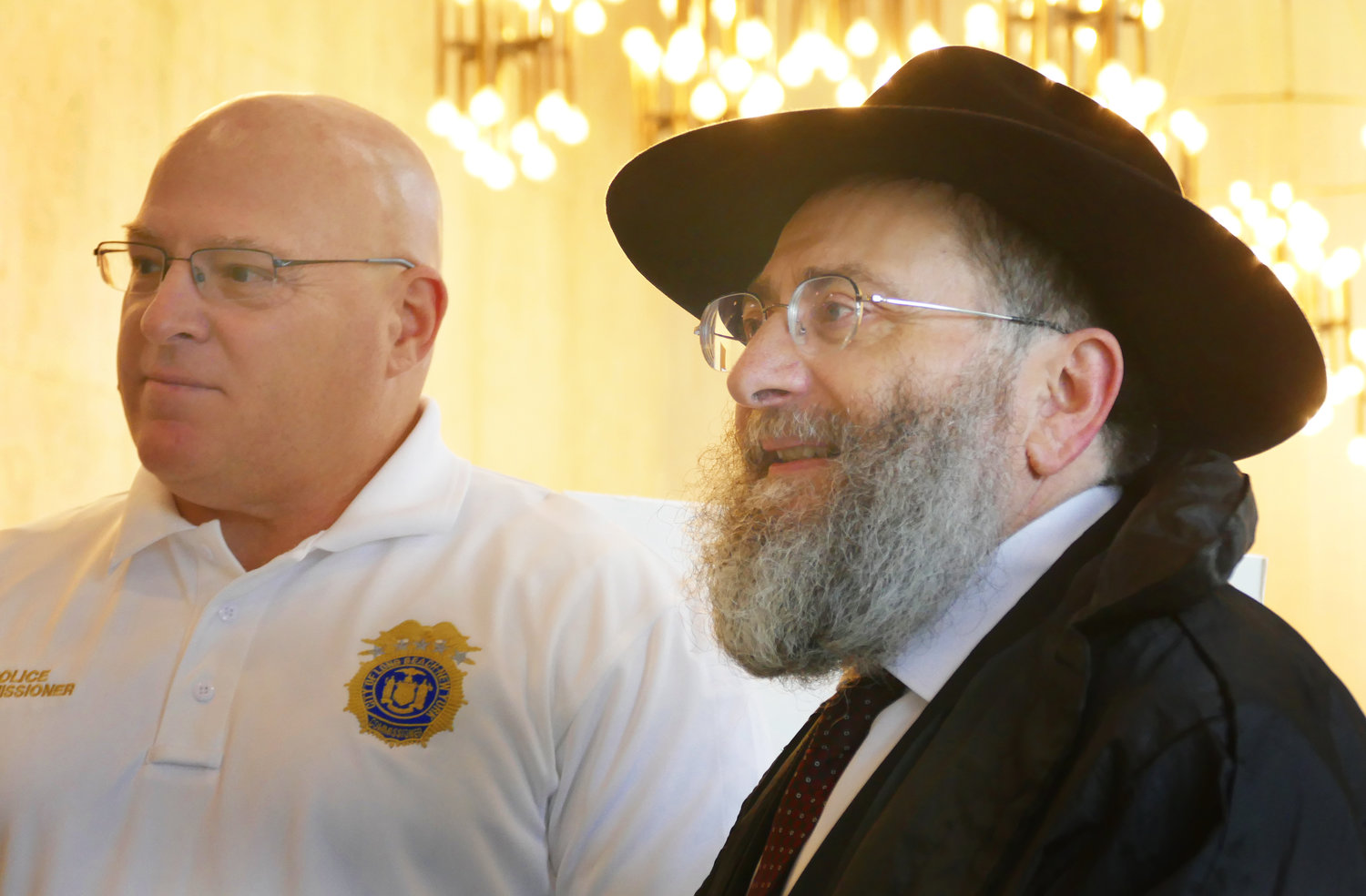 Rabbi Eli Goodman, of the Chabad of the Beaches, walked into his synagogue last August and was stunned to see that the ark had been vandalized, and two torahs and other religious items were missing. He immediately called the Long Beach police.

In the days that followed, Goodman’s face was heavy with strain as he described his shock and feeling of loss for his synagogue and the rattled Long Beach community.

But last Sunday, during a celebration at the synagogue attended by over 100 people, Goodman’s strain was re-placed by a wide smile when he dedicated a new torah to replace one of those that was stolen.

“This is like a wedding,” he told the gathering, explaining that the day marked the marriage of the new torah and the Chabad congregation. “Every drop of ink (in the torah) comes from the effort of everyone here.”

Rain delayed plans to march through the streets with the new torah. But Goodman said that rain on a wedding day “brings good luck.”

It was a joyous day at the Chabad, on West Walnut Street in Long Beach, with members of the congregation taking turns to inscribe the final letters in the new torah, which was officially written by a scribe.

A torah has over 300,000 characters, and if even one is in any way incorrectly drawn, that torah is considered unkosher and cannot be used.

A new torah costs between $50,000 and $60,000, and takes about a year to write. The Chabad’s congregants contributed to pay for the new torah, at different levels. Some donated a few dollars, and others thousands, Goodman said.

A second torah has been commissioned and will be complete next year. Norm and Elaine Brodsky, of Long Beach, donated funds for that torah. Brodsky, a highly successful entrepreneur, said he was happy “to provide light to a fine institution.”

Assistant Rabbi Yechiel Winfeld sat before the new torah and helped members of the congregation fill in some of the final letters. The scribe for this torah was Chaim Gourarie. Goodman said it was the first torah Gourarie has written.

“There are very particular [religious] laws about how this has to be done,” Winfeld said, referring to the writing of the torah characters.  New torahs are written only about every few years, he said.

“It’s not every day,” Winfeld said. On a table before him sat the new torah, a yad, used for pointing at particular letters when the scroll is read, a crown and jewelry used as torah decorations, all items stolen during the break-in and vandalism at the synagogue.

Phase One of a major renovation, including the building of the lobby and meeting area where Sunday’s celebration was held, has been completed. A second phase is to include a multi-purpose space, a library and classrooms.

The dark day lsdy August was a distant memory as the focus turned to the present and the future. “For a lot of people, this is a very emotional day,” said Winfeld. The day of the break-in, he said, “is in our memory. But as a people, we have been through so much. We’re not looking back.

“My grandparents are Holocaust survivors, but I never saw them not smiling. Our action now is going forward.”

The break-in took place Aug. 27, two weeks before the Jewish New Year of Rosh Hashana. The vandalism sparked a speedy investigation by Long Beach Police and an exhaustive search by synagogue members who were joined by some local residents who scoured the waters and the beach.

A few days after the break-in, a 23-year-old man, Hunter McElrath, was arrested and charged with burglary. Some residents told police they saw a man in the ocean wearing some of the religious jewelry. Police said McElrath was homeless. He pleaded guilty, was sentenced to six months in jail and probation and was ordered to stay away from the Chabad. No motive for the crime was ever established.

But, Goodman said, “Today is all about the future. It’s about our ideals, which are kindness, decency and goodness.”

When the rain let up, Goodman led a group of marchers along West Walnut to the boardwalk and back to the synagogue, singing as they walked.