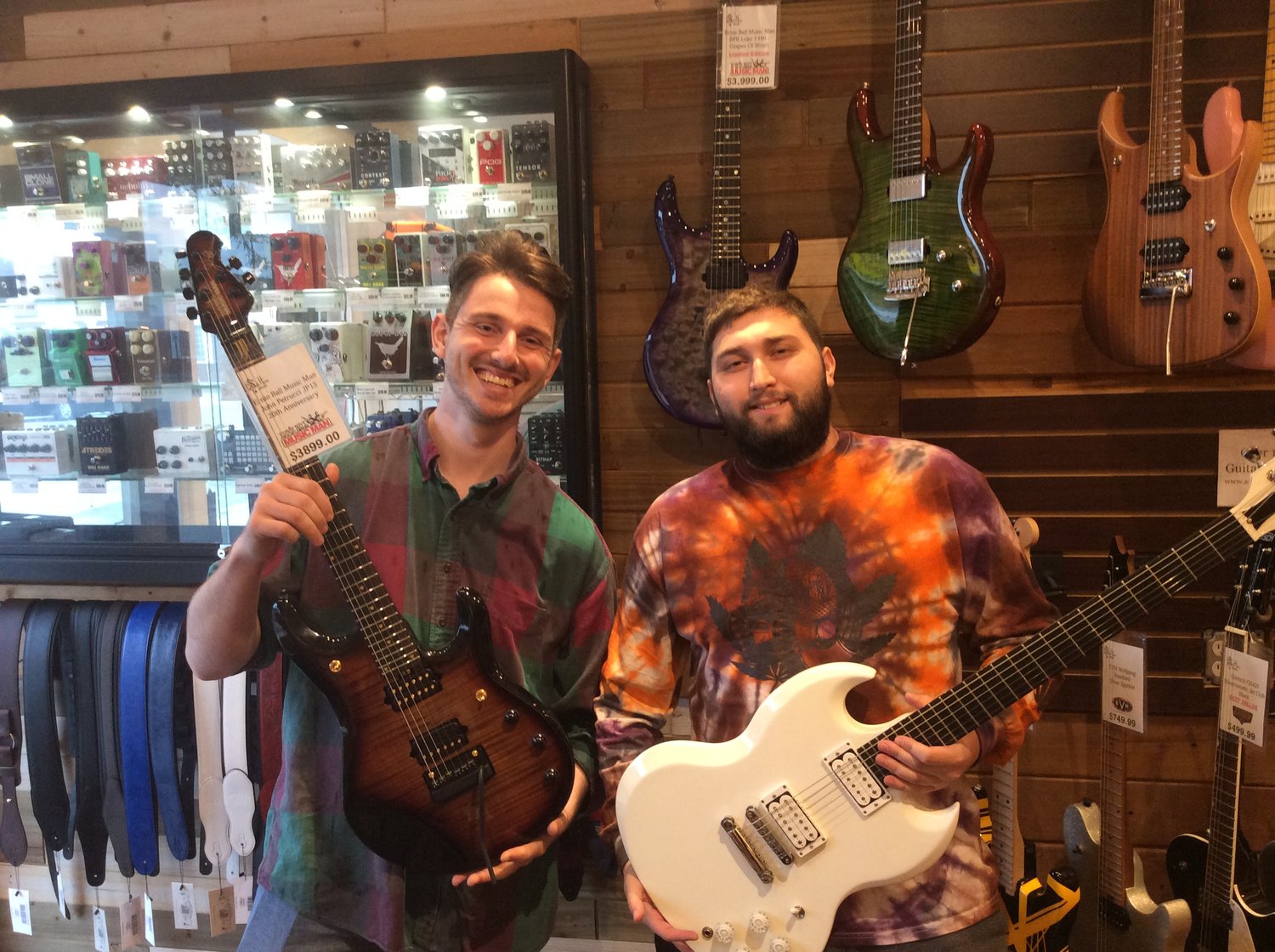 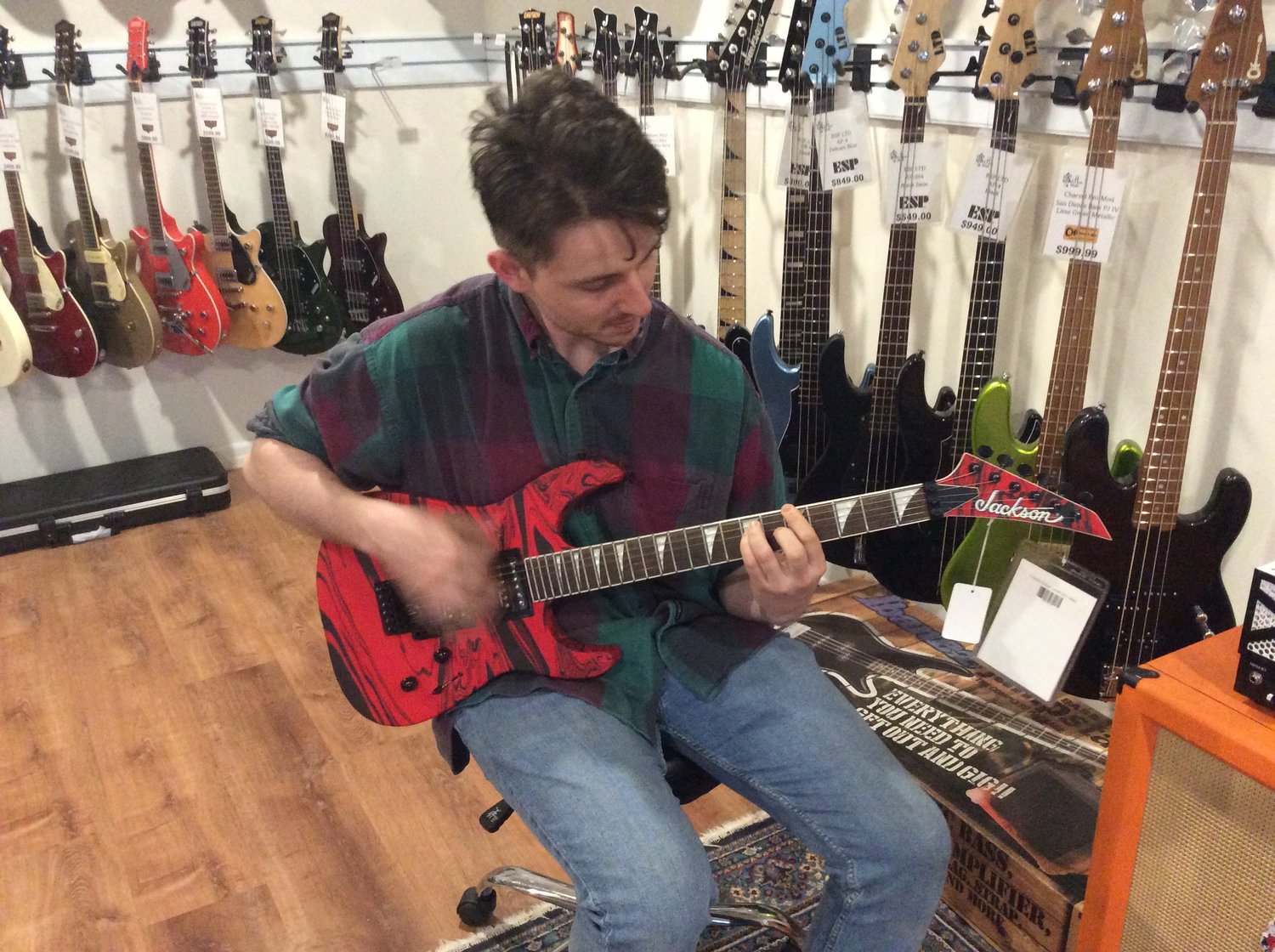 At only 26 years old, Zareno has been flourishing in the guitar business, following his passion.
Kepherd Daniel/Herald
Previous Next
By Kepherd Daniel

Brendan Zareno, 26, has been fixing guitars for most of his life, and on the heels of Superstorm Sandy, he decided to take his hobby to a new level and began making a career of it.

Whether guitars needed new strings or mere adjustments, Zareno had become an expert at guitar repair at a young age.

“I’d fix them up and then sell them to make $100 in high school, which during that age is amazing,” said Zareno. “I knew how to fix them really well early on, but I had 25 guitars scattered in my room and I needed somewhere else.”

Zareno rented space at 237 Long Beach Rd., which was severely damaged by Sandy, fixed the place up and turned it into a showroom where some of the rarest guitars could be found.

Zareno officially opened Safe Haven Music almost seven years ago and stocks some of the most popular names among guitar enthusiasts, including Ibanez, Jackson, EVH, Gretsch and Charvel.

Guitar enthusiasts from across the world have taken note of Safe Haven. “We’ve shipped as far away as Australia a couple of times,” said Zareno. “We get a lot of people from the city, some people even like to fly in for specific things because we have gear that almost no one else in the entire country will have.”

The store has guitar pieces so rare that only 40 others exist in the world, he said.

The store also has an 8,000-square-foot guitar warehouse in Freeport, which is where Zareno now spends most of his time as he continues to grow his guitar business.

“I started off just fixing guitars and now I do data management and it’s turned into a lot of product and management data, web development,” said Zareno.

While Zareno has to branch out and conduct other day-to-day responsibilities involving the guitar business, he still is able to step into Safe Haven Music and enjoy the passion that got him started.

“At the end of the day when [management] gets a little draining, I can open up a cardboard box with a once-in-a-lifetime, super rare, handmade guitar inside and say, ‘This is awesome,’” he said.

While he loves guitars, Zareno doesn’t believe he is as good as you would expect at playing the instrument, but he holds a high passion for guitars and his business, as well as being a young business owner. He said he had to understand the different levels of passions that customers coming into Safe Haven may have and also, more importantly for Zareno, learn to delegate responsibilities throughout a business that he loves.

“It was like definitely hard for me to transition away, but I couldn’t physically do everything,” he said.

Zareno must remain on the warehouse floor working with guitar sales representatives, especially working alongside Stew Marder, who runs many of the in-store operations and, like Zareno, is an expert at guitar repair.

“I see his work and it’s good and he’s also been doing this for years,” said Zareno. “With me trying to do a million things at once, it’s hard to be super meticulous about every single repair, so it’s good that he is very meticulous.”

The guitar shop draws much attention by running a majority of business operations online on the store website, leaving it one of the few industries that were mostly unaffected by the Covid pandemic. “People were stuck at home, and people were buying guitars,” Zareno said. “That whole situation forced us to make everything online perfect.”

While Zareno is still a very young business owner and living out his dream, he has plans to continue to grow his guitar business. “I’m good to keep going,” said Zareno. “I’m lucky to have had the opportunity to pursue this, to begin with, and I feel like I’m just getting started. There are still major brands I don’t carry yet and I see all these avenues in this business. I don’t think I’m going to be satisfied until I dabble in all of them.”