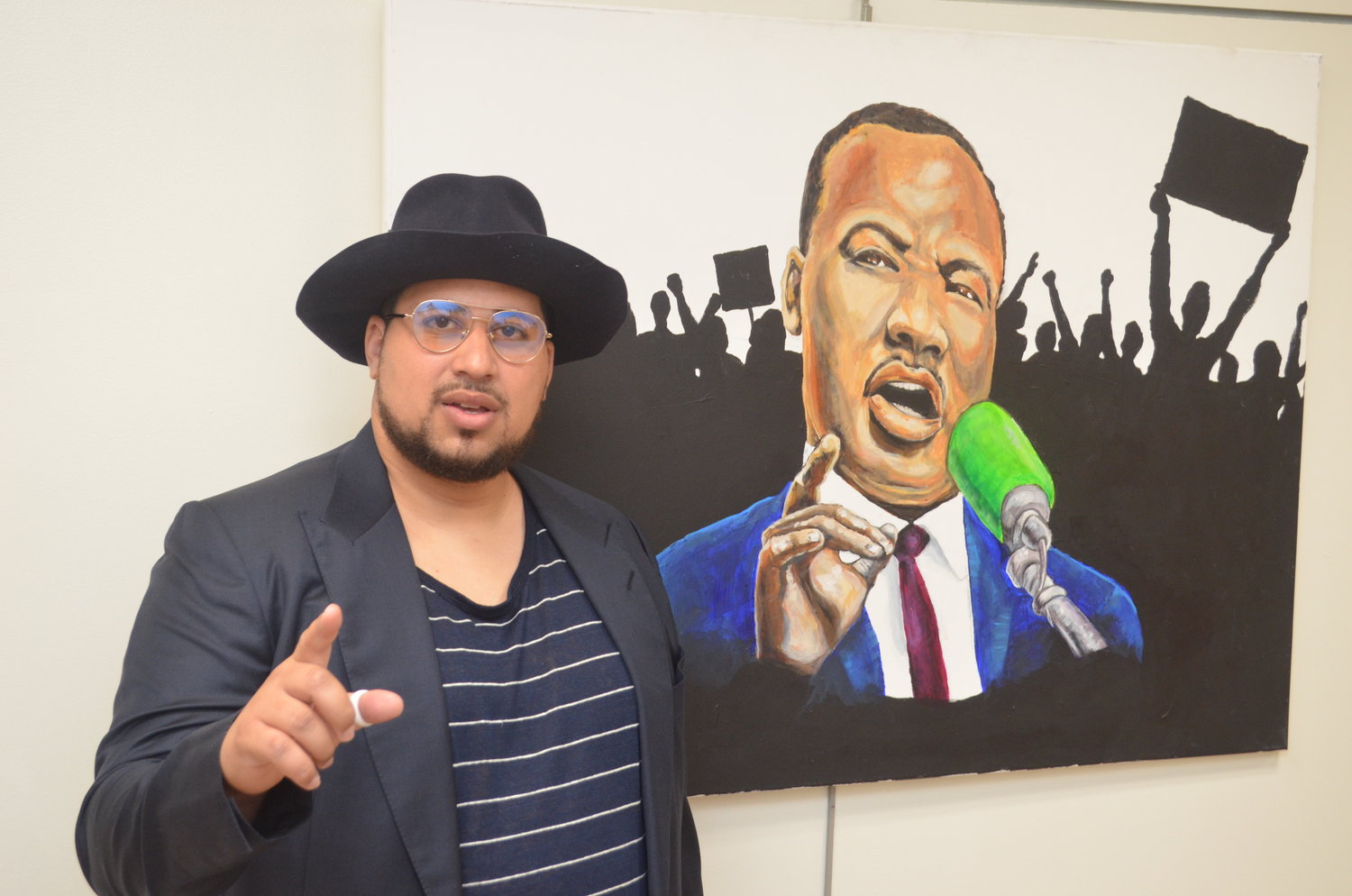 Ron McHenry, the first Black artist to hold a solo show at the Long Beach Public Library, with a portrait of the Rev. Dr. Martin Luther King Jr.
Tim Baker/Herald
By James Bernstein

Ron McHenry’s civil rights and religiously oriented artwork is bold, detailed and packed with emotion. And it is now the first work by a Black artist from the North Park section of the city to be displayed in a solo show at the Long Beach Public Library.

The library has never had a single-artist show by a Black painter. McHenry’s exhibit is seen as a triumph for Black artists and Black art in Long Beach. Although the display, titled “The Moment of Faith,” is scheduled to run only until Sunday, library officials say McHenry’s work is likely to be showcased again in the near future.

Library Director Tara Lannen-Stanton said last week that the library has hosted other exhibits by a diverse group of artists, but McHenry’s is a first. The Long Beach Art League hosts the majority of the city’s exhibits, Lannen-Stanton explained, and the public library has only recently held exhibits of its own three or four months of the year.

Kathryn Ramsey, president of the Long Beach Art League, said that the organization planned to expand its outreach program.

“I could see (McHenry) coming back with some new pieces,” Lannen-Stanton said. “Our goal is to focus on solo exhibits.”

Anissa Moore, who was the first Black president of the Long Beach City Council and who, earlier this year, was appointed deputy Nassau County executive for health and human services, said that it has only been in recent years that the North Park community and library have been “building bridges.”

“No one ever wanted to keep anyone out,” Moore said.  “But when I came into the Long Beach City Council (in 2015), “I wanted to start building bridges with the city.”

Last month, she said, the North Park community partnered with the public library to celebrate Junteenth, marking the anniversary of an announcement in 1865 by a Union general that slaves in Texas had been freed.

McHenry, a broad-shouldered, 35-year-old who has Hispanic lineage as well, is a minster at the Evangel Revival Community Church, on Riverside Boulevard in North Park. He was born and raised in Long Beach, earned a degree in biology at SUNY Old Westbury and later worked at a private biology lab in Madrid, identifying pathogens in foods. After returning to the U.S., he worked at the Brookhaven National Laboratory in Upton, focusing on methods for producing alternative sources of energy.

He now works as a biology teacher at Epic South High School in Ozone Park, Queens.

Jeannine Dillon, the librarian at the public library, had seen McHenry’s work in February, at a Black History Month celebration at the offices of the North Park Civic Association. “Ron came with a few of his pieces,” recounted Dillon, who was impressed. “I said, ‘What a shame it’s not at the library.’ The library has three or four months a year when it does its own exhibits.” She arranged for McHenry’s exhibit.

“I think (his work) is very bold and dramatic,” Dillon said. “It challenges you.”

McHenry’s exhibit consists of eight pieces on the wall of the library’s second floor. There is a striking portrait of a young John Lewis, the congressman who was considered one of America’s leading civil rights leaders, and who died in 2020. He was a founder of the Student Nonviolent Coordinating Committee, and was among the leaders of the iconic march across the Edmund Pettus Bridge in Selma, Alabama, in 1965, in which he and others were beaten by police.

There is a somber portrait of the Rev. Dr. Martin Luther King Jr. called “The Mountain Top.” A viewer is drawn to the small dark figures on each side of King’s head. On one side are cheering supporters, and on the other, a mob of angry protesters.

And there is a portrait called “Strange Fruits,” of the Rev. Al Sharpton, the often controversial civil rights activist, talk show host and politician. His face is surrounded by the names of slain Black people, including George Floyd and Eric Garner, who was killed in Staten Island in 2014 when a police office put him in a choke hold while arresting him for selling loose cigarettes. In the painting, Sharpton’s eyes are closed. “He is praying for peace,” McHenry said.

McHenry combines his artistic talent with his deep religious beliefs. “I am an artist, a teacher and a minister,” he said. “My goal is to raise consciousness and bring us all together.”