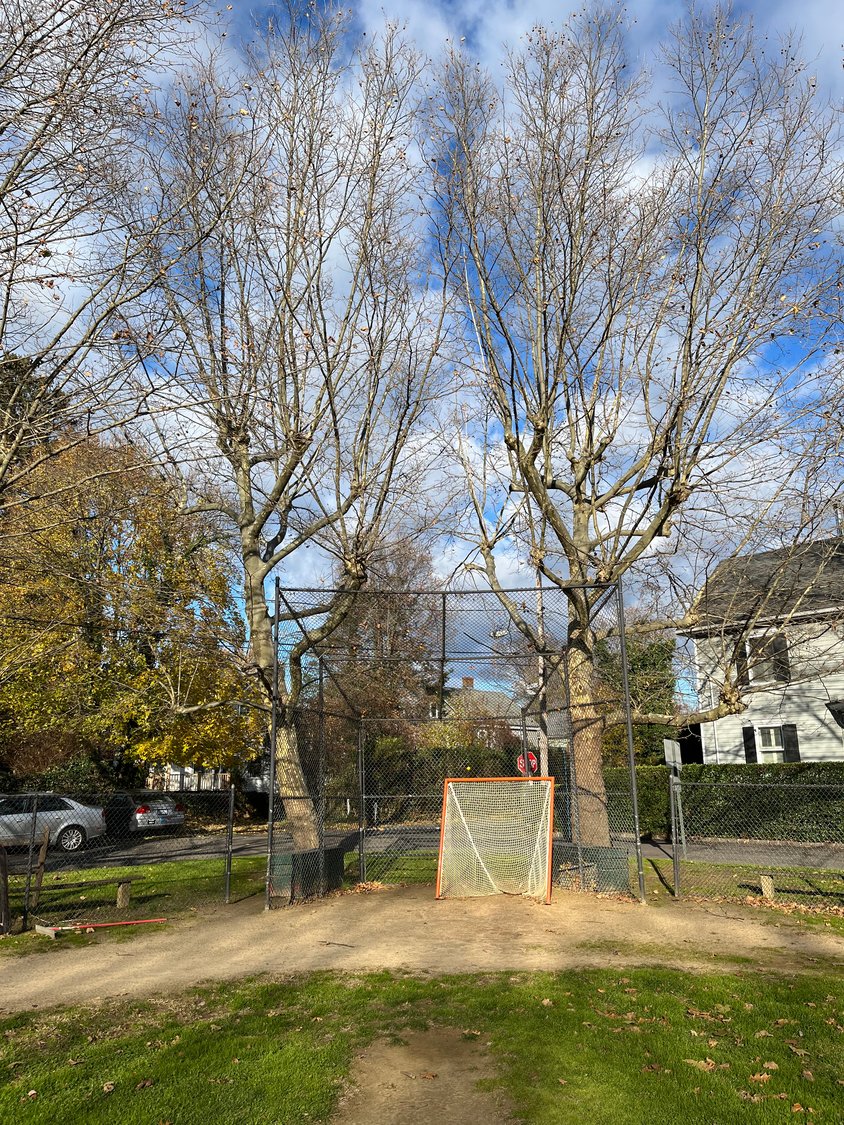 The village isn’t able to upgrade the baseball field, as it has have done in neighboring parks.
Will Sheeline/Herald 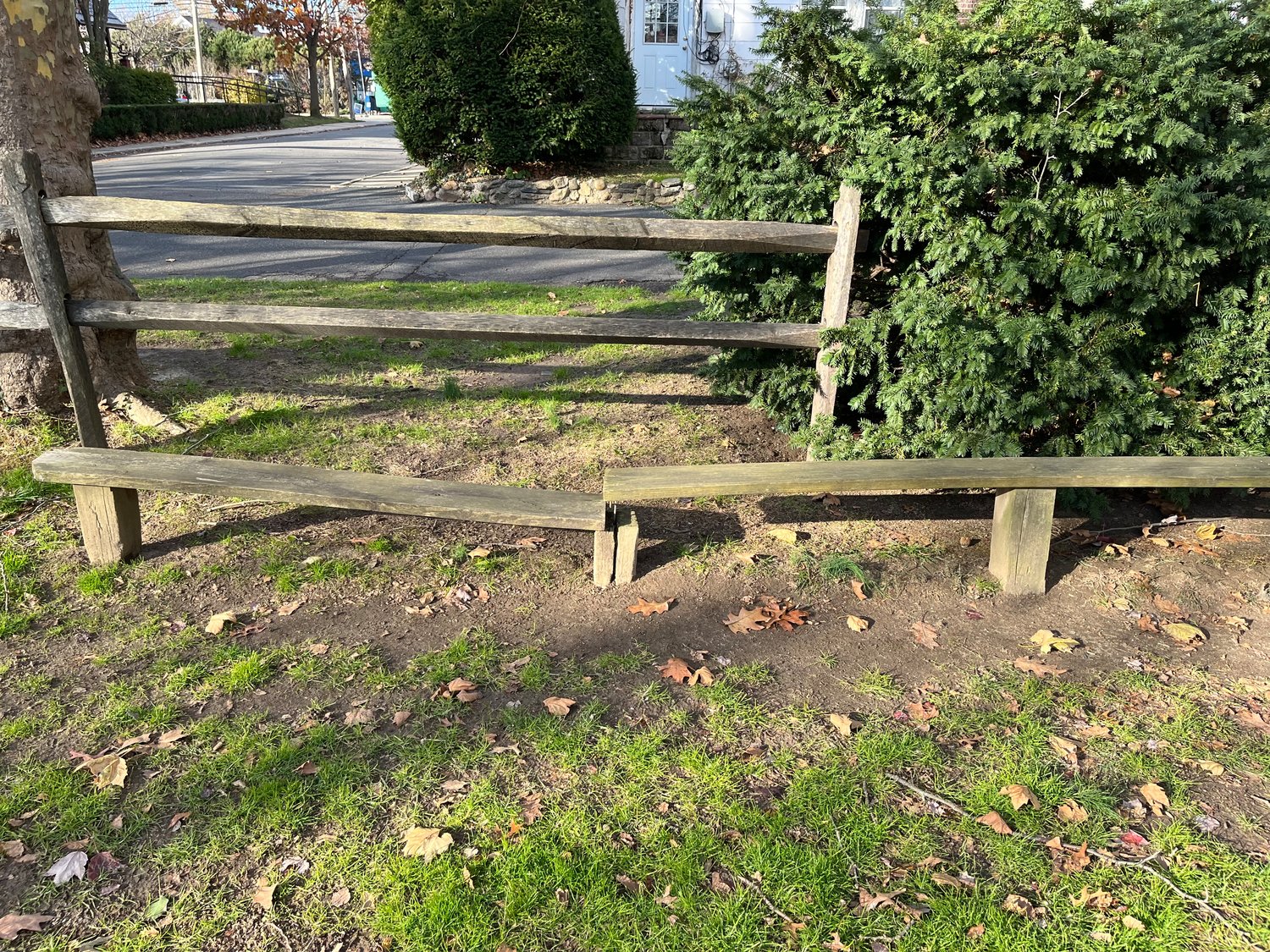 Without a deed, the village can’t repair Roslyn Park’s benches, which are inadequate for public use.
Will Sheeline/Herald
Previous Next

For this level of documentation, we have to go into the city and get into their archives.”
Erin McDonnell, grants coordinator, Sea Cliff
By Will Sheeline

One of Sea Cliff’s proudest attractions is the many walking paths and parks that dot its landscape. The village has recently received several grants for roughly $150,000 to help maintain, beautify and improve several of these green spaces.

Roslyn Park is not one of them, however, because the original deed ceding ownership of the park to the village is nowhere to be found.

In 2019, Sea Cliff received money from State Sen. Jim Gaughran for a park improvement grant. But when the world was thrown into chaos because of the coronavirus pandemic, the village switched its focus to addressing lockdown and pandemic-related issues.

So it was not until 2021 that the village government began filling out the paperwork to accept the grant. That’s when officials realized that something was missing.

The deed granting Roslyn Park to Sea Cliff could not, and currently still can not, be located. Without it, the village is unable to prove it has “site control,” a development term meaning the right to own or lease a property.

According to Mayor Elena Villafane, without the deed or a similar document that proves the village’s ownership of Roslyn Park, Sea Cliff is unable to use any of the grant funding it has received for maintenance and renovations of the property. The money would be used to repair and replace the park benches, do some touch-up work on the field and generally improve the utility and ambience of the space.

“What we’re trying to do is get that money in place so that we can revitalize the park by next baseball season,” Villafane explained. “We’ve found a lot of historical village notations that imply our control of the park, but we don’t have a single piece of paper that says, ‘Mr. ABC deeded Roslyn Park to the Village of Sea Cliff,’ for example, and that’s what we need in order to complete these grants.”

The search for the deed has been exhaustive, but hampered by the difficulty finding and accessing village records from the late 19th and early 20th centuries. Part of the problem is that Sea Cliff is nearly three decades older than Nassau County, and was formerly under the jurisdiction of Queens, meaning that some of its earliest and most important documents may not even be in Nassau’s public records.

Erin McDonnell, the village’s grants coordinator, explained that government officials in the late 1800s were also less diligent than modern record keepers when it came to recording and saving legal documentation. Based on the information they have been able to find, the deed likely dates to the 1870s or 1880s, as they discovered in their search that Roslyn was one of the first of four parks in the village.

“For this level of documentation, we have to go into the city and get into their archives,” Mc-Donnell said. “We’ve had to do similar types of title searches, like for the firehouse, which had a handwritten deed we found in Queens.”

Villafane has even gone to Queens to try and access their county clerk’s records, but during the pandemic the records were closed to the public. She has now begun speaking with title companies to try and find a way around the issue.

While the money is not going anywhere, the inability to find the deed has left the village unable to use any of it at Roslyn Park. This has also prevented them from accessing the money of not just the initial grant, but several subsequent ones as well.
County Legislator Delia DeRiggi-Whitton secured two additional grants for Sea Cliff through the Conservation Reserve Program, and the village has already used some of the funding for revitalizing Clifton Park. The money was earmarked for the repair of community baseball fields.

“There are a lot of criteria for these grants to happen and it takes a while, which can be kind of arduous to be honest,” DeRiggi-Whitton said. “You also have to prove that the project will benefit something that is open to the public and has to last at least five years. So it can’t be used for a salary or anything.”

While DeRiggi-Whitton didn’t know the details of the issue facing Roslyn Park, she promised to look into the problem and do what she could to expedite the process.