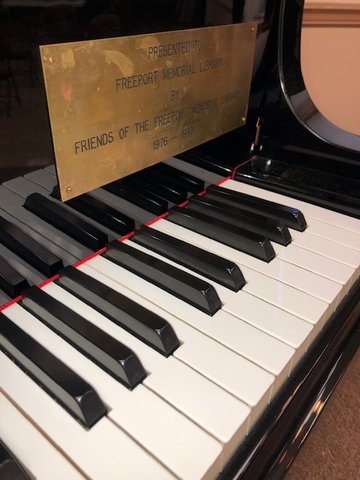 The original objective of the organization was to acquire a baby grand piano for the library, a goal they quickly met
Courtesy The Friends of the Freeport Memorial Library
By Mohamed Farghaly

The Freeport Memorial Library will celebrate its Friends of the Library organization from October 16th to the 22nd as part of the 17th annual ‘National Friends of Libraries Week’.

The Friends of Freeport Memorial Library held their first reported meeting in the 1950s, and they reconstituted themselves at a meeting on October 2nd, 1975. They agreed to their first goal at this meeting, which was to acquire funding for the purchase of a baby grand piano. Their objective was met precisely two years later, when their new piano was played for the first time during a concert starring Freeport pianists Jocelyn Rothgarber and Hale Smith on October 2nd, 1977. Almost 50 years later, the piano is still being played at free Library concerts for the Freeport community and beyond.

To date, the Friends of Freeport Memorial Library have raised more than $30,000 for the library. The funds earned are allocated to support Library performances throughout the year, as well as awards and events for summer reading clubs. The Friends have also donated a sound system, seats, and equipment in addition to the baby grand piano.

“Over the years, the library has played a tremendous part in my life and the life of my family,” Friends president Larry Gumbs said. “I used to bring my two boys to this library, and now I bring my grandson; it’s a really precious location for us and many others in Freeport.”

On Sunday, Oct 16th at 2:30 p.m., the Friends of Freeport Memorial Library will kick off ‘National Friends of Libraries Week’ by co-sponsoring a concert by ‘Gathering Time’. Gathering Time, a Long Island-based folk-rock trio, will perform original compositions as well as classics by James Taylor, the Mamas & the Papas, The Byrds, and others.

“We are grateful for the continuous support of The Friends,” said Library Director Lee Ann Moltzen. “Over the years our patrons have enjoyed concerts sponsored by The Friends as well as prizes for the Summer Reading Club winners. Their efforts have certainly helped us to enhance and expand our offerings to the Freeport community.”

The organization will hold free giveaways and relay information about joining and participating in The Friends of Freeport Memorial Library during the concert on Oct 16th and throughout that week. On Nov 16th, they will hold their annual meeting where anyone is invited to attend. To RSVP, email mpignataro@freeportlibrary.org.