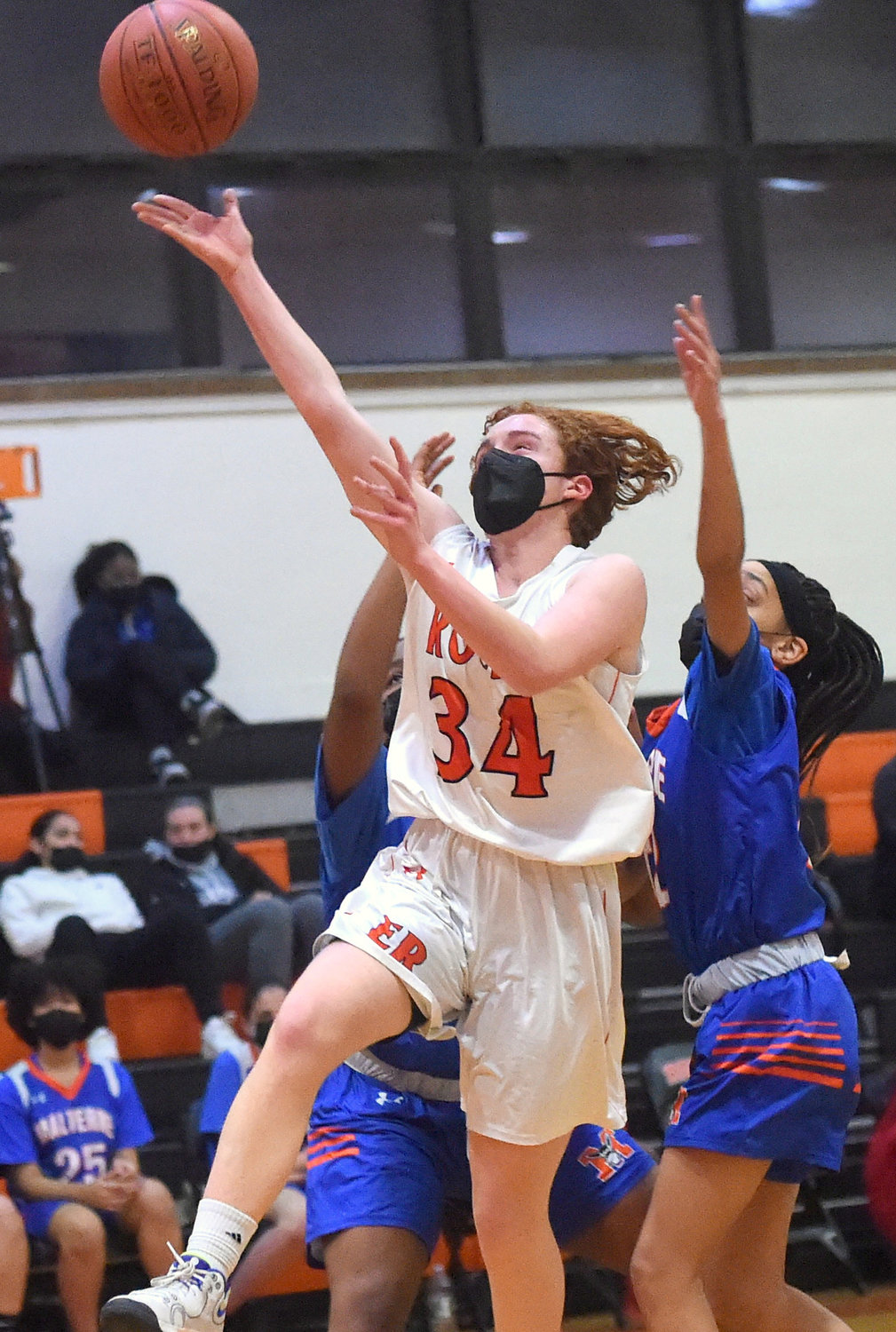 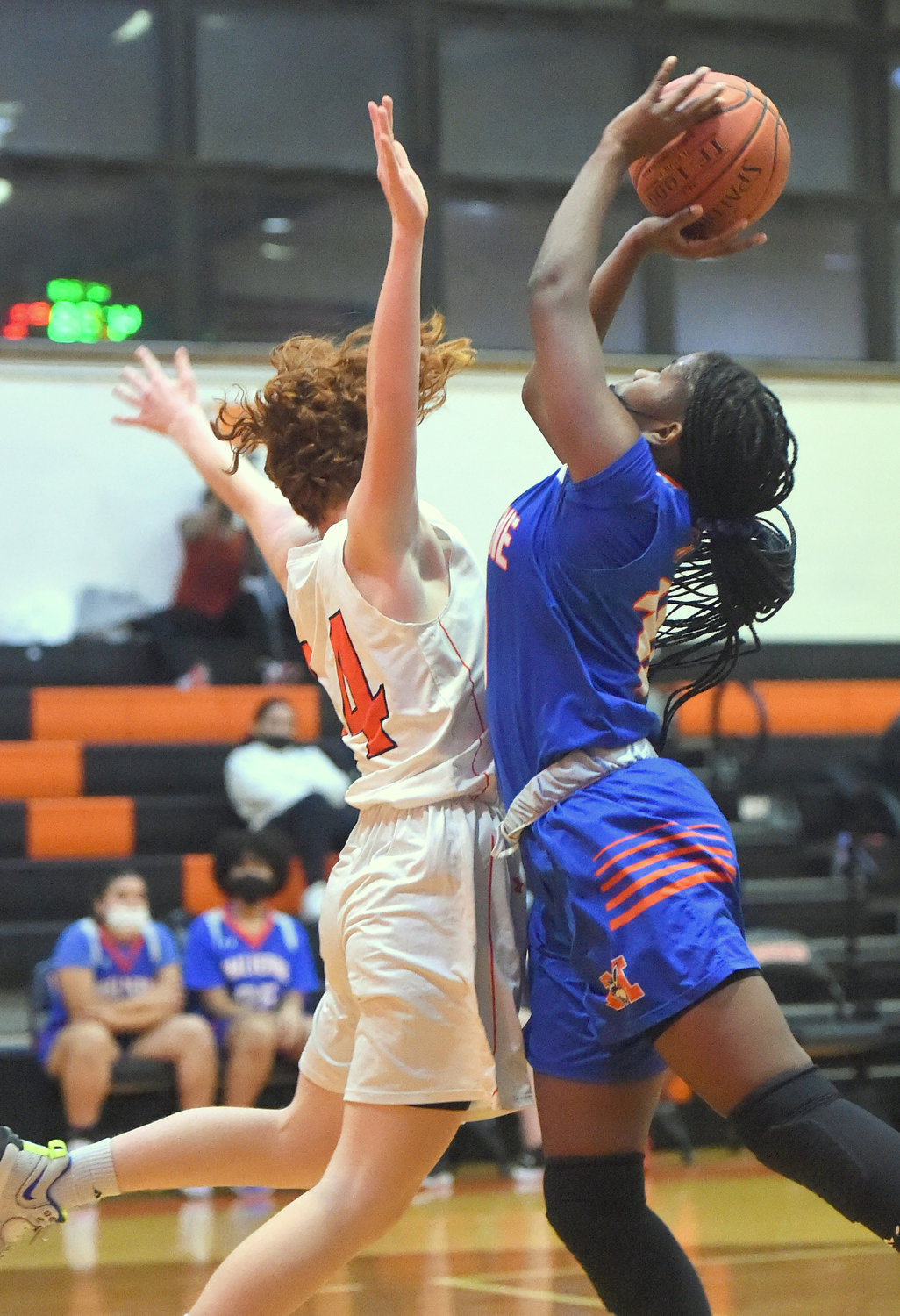 Malverne's Princia Ulysse, right, drove against East Rockaway's Maya Motherway during a Conference B clash won by the Rocks on Jan. 4.
Donovan Berthoud/Herald
Previous Next
By Brian Kacharaba

The Rocks are rolling again, while the Mules are still looking for that elusive win.

Theresa Lynch had a career-high 22 points and 10 rebounds and eighth-grader Maya Motherway came off the bench to record 14 points and five assists as East Rockaway girls’ basketball avoided a third straight loss with a 59-45 win over visiting Malverne on Jan. 4.

Riley O’Hagan scored 12 points and Mimi Bilardello added seven for the Rocks (3-3, 1-2 Conference B1), who ended 2021 with consecutive losses to Cold Spring Harbor and Oyster Bay.

“We knew going into the game it was going to be a tough game regardless,” said East Rockaway assistant coach Fred Cange, who filled in for absent head coach Cheri Poland. “It was going to be a physical up-and-down game [and] a track meet. We had to get prepared and stick to the game plan and that’s what the girls did,” Cange added.

It was a breakout game for both Lynch and Motherway, who reached a season-high in points. Each of their previous bests was seven in a win over Oceanside on Dec. 9.

“Them two stepping up was huge,” Cange said. “Those two girls in particular really put everything they had into practice and working on their game and it showed.”

Princia Ulysse scored 18 points and Mikayla Johnson added 13 for the Mules (0-7, 0-4), who dropped their 19th straight game despite posting their best offensive output on the season. Malverne last won on Jan. 17, 2020.

“We’re really a young team, so it’s just a lot of learning experiences,” said Malverne head coach Amanda Masson. “I thought we played really well, it was just the little things that were missing.”

The Mules struggled from 3-point range, missing all 12 of their attempts from beyond the arc in the first quarter and the first three attempts of the second before Ulysse and Johnson finally connected on consecutive possessions near the midway point of the session. They finished 4-for-29 on the night.

“We actually handled the ball well and didn’t have as many turnovers as we usually do, but it was more missed shots,” Masson said. “Definitely free throws [too].”

East Rockaway led 9-6 after the first quarter and maintained a three-point lead with just under four minutes left in the second before scoring the last seven points for a 26-16 halftime advantage. O’Hagan started the rally by burying a 3-pointer from the left arc with 3:13 left. Neither team scored again until the final minute, when Lynch put back an offensive rebound from down low and Bilardello converted a layup after breaking up a pass in the defensive zone.

Malverne’s Jamila Smith scored the first four points of the second half to cut the deficit to six, but East Rockaway responded with another offensive rebound conversion by Lynch and 3-pointers from Motherway and O’Hagan for a 34-20 lead with 5:37 left in the third quarter.

Lynch collecting six more points during a 13-6 run that closed the third quarter that helped her team take a 49-31 lead.