English is just the beginning 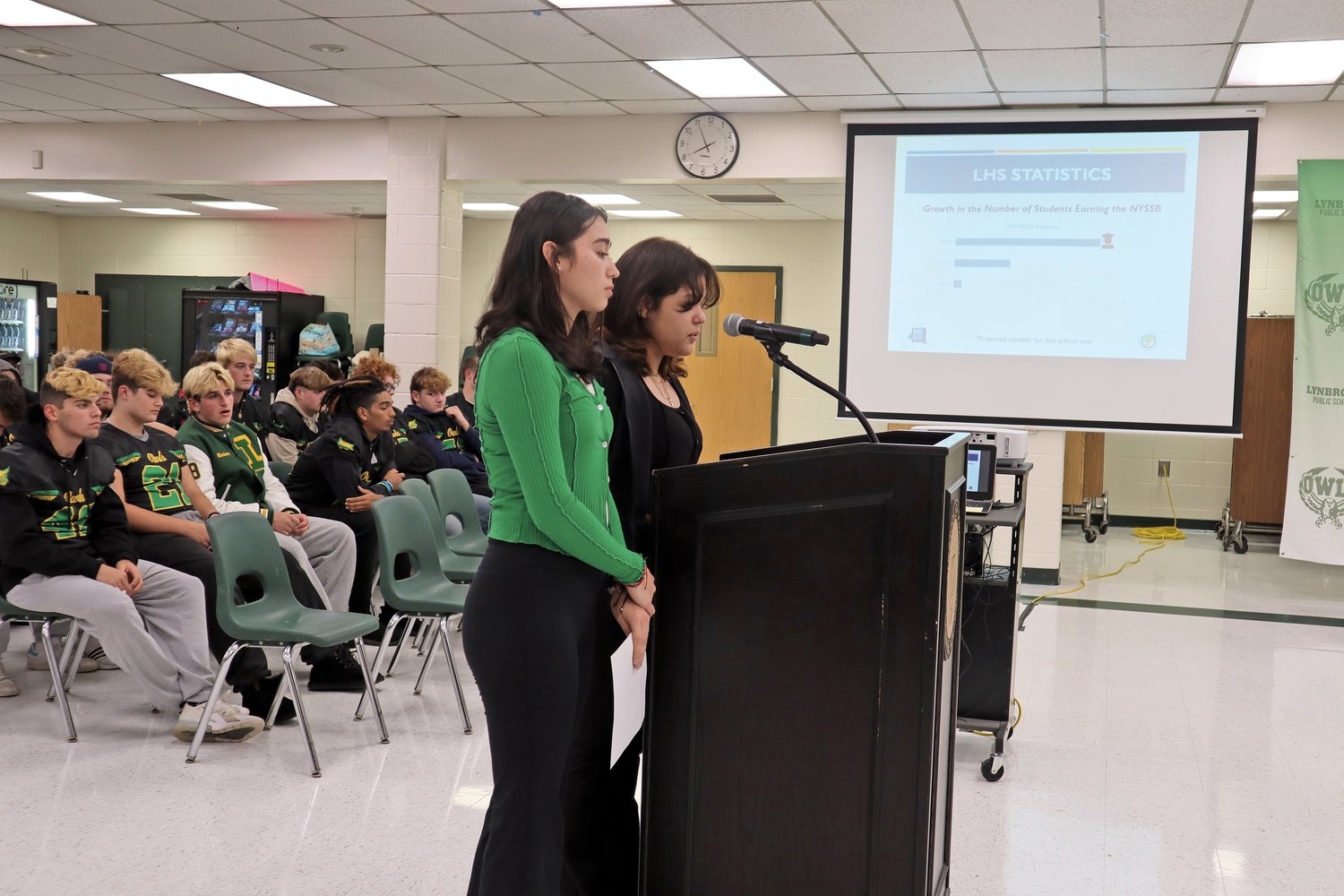 This year, we have a projected number of over 50 students that have expressed an interest in receiving the Seal of Biliteracy.”
Madelyn Torres chair, Integrated English as a New Language

How to qualify for the state Seal of Biliteracy

Eileen Castillo and Lady Ramirez, candidates for the New York State Seal of Biliteracy, explained  to the Lynbrook Board of Education about the importance of being bilingual.

The chairperson for Integrated English as a New Language, Madelyn Torres, highlighted two students for being proficient in multiple languages. Castillo, an immigrant from Honduras, and Ramirez, from El Salvador, were introduced during the Nov. 9  Lynbrook education board meeting.

According to Torres, if the New York State Seal of Biliteracy Board accepts the students’  application for the award, it will be noted on both their diplomas and transcripts. They will receive a medal that they will wear during graduation.

This award was introduced at Lynbrook High School in the 2020-21 school year and applications from LHS for this award spiked in the past year.

According to the state education department website, the intent of the State Seal of Biliteracy is to “encourage the study of languages, to identify high school graduates with language and biliteracy skills for employers, to provide universities with additional information about applicants seeking admission and placement, to prepare students with 21st century skills, to recognize the value of language instruction, and to affirm the value of diversity in a multilingual society.”

“In Lynbrook, we’ve seen such great growth,” Torres said regarding the number of students applying for the award. “This year, we have a projected number of over 50 students that have expressed an interest in receiving the Seal of Biliteracy.”

Castillo and Ramirez, explained to the Lynbrook Board of Education projects that they’ve completed as part of their for the seal.

“My project for the Seal of Biliteracy centers on immigration issues in both my home country of Honduras and the United States of America,” said Castillo,  who addressed the political unrest and crime in Honduras to explain why her family immigrated to the United States.

During Castillo’s research of immigration, she noticed big immigration issues. “There is a major crisis right now as a result of a huge number of immigrants arriving at the border,” Castillo said. “I look forward to continuing my research and possibly investigating solutions in the immigration issues that both Honduras and the United States face.”

Ramirez’ project centered on gang violence in her home country of El Salvador. “In El Salvador, poverty is widespread,” Ramirez said. “A typical job in El Salvador doesn’t pay more than five dollars a day and many people can’t even find jobs.”

According to Ramirez’ research, over 60,000 gang members live in El Salvador with 60 percent of schools being affected by gang threats. She explained that because of these threats, many students dropped out of high school and joined gangs.

“Gangs control the country in ways you can’t even imagine,” Ramirez said. “Even police officers are afraid of gangs.”

Ramirez looks forward to continuing her research so that she can educate more people about the struggles that El Salvadorians endure.

“To the two young ladies, that was excellent,” board president William Belmont said.

“Learning a language was difficult enough, but having to come speak publicly was really beautiful and very impressive to be able to express those heartfelt words.”

“Ladies, there are many people whose native language is English who are terrified to get up at that microphone and speak,” Marcus said. “You should be very proud of yourselves for what you just did in front of all these people.”