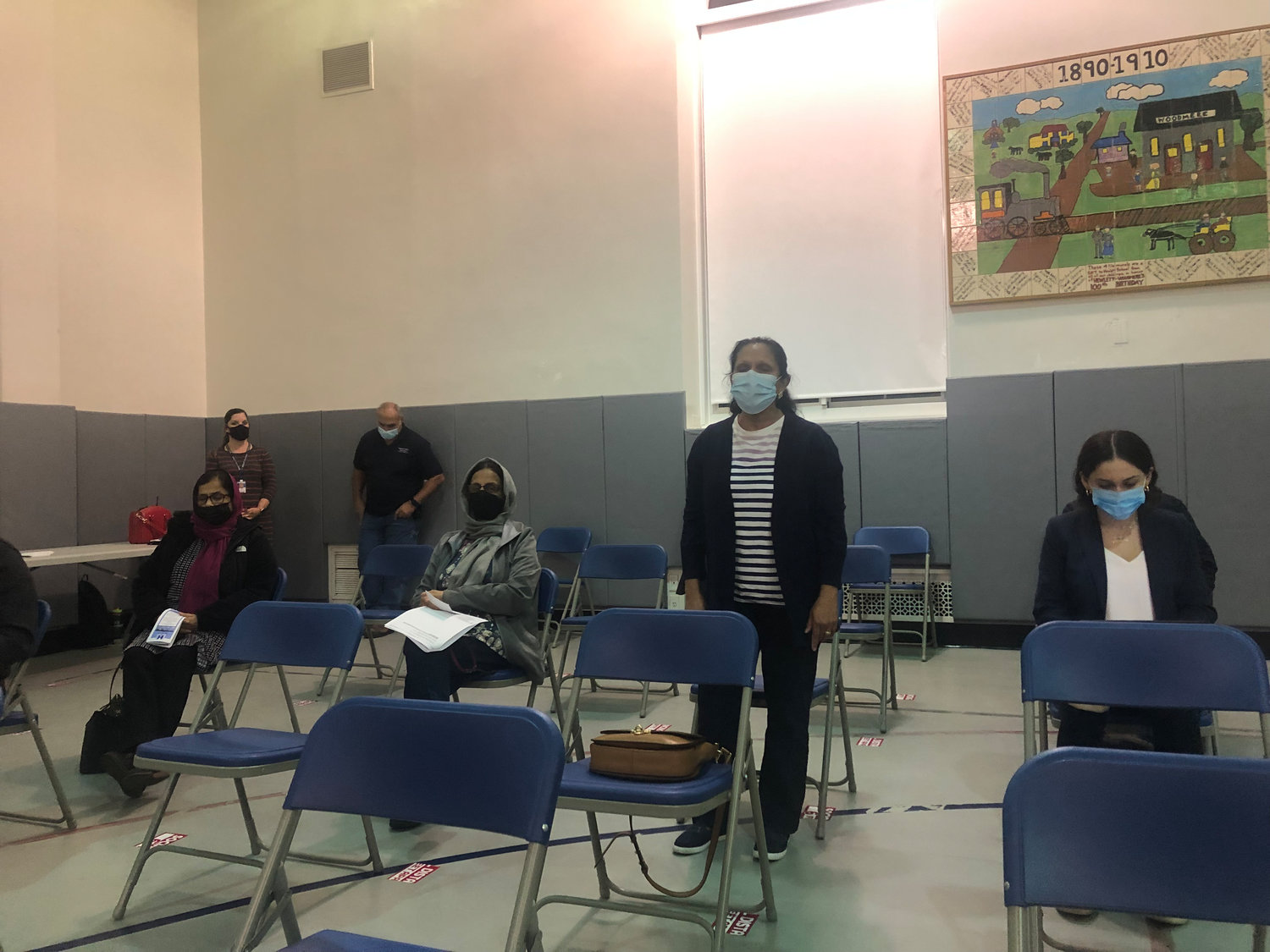 Haseena Mooppan, a school district resident, spoke at the Nov. 17 Board of Education meeting about adding the Eid holidays to the school calendar.
Lisa Margaria/Herald

Since 2017, Muslim parents and students in the Hewlett-Woodmere School District have asked that the Board of Education consider adding two Muslim holy days, Eid al Fitr and Eid al Adha, to the school calendar. The days are now recognized by 22 districts across Long Island.

We feel that the board has completely ignored us the past few years.”
Haseena Mooppan Hewlett
What are the Muslim Eid holidays?

Every year, the Eid holidays fall about 11 days earlier than the year before because the Islamic calendar follows a lunar calendar. They occasionally occur over summer vacation or on a weekend. Eid al Fitr is on a weekday in May in 2022 and in April in 2023, while Eid al Adha falls on weekends in July 2022 and June 2023.

Eid al Fitr marks the end of Ramadan, when Muslims fast during the day, spend time with other members of the community and do charitable acts. To celebrate Eid al Fitr, many Muslim families say a morning prayer and share a feast. Children receive gifts as rewards for good deeds during Ramadan.

Eid al Adha, which follows Eid al Fitr, marks the end of the Hajj, or pilgrimage to Mecca in Saudi Arabia, and many families gather to reflect on values and sacrifice.

Since 2017, Muslim parents and students in the Hewlett-Woodmere School District have asked that the Board of Education consider adding two Muslim holy days, Eid al Fitr and Eid al Adha, to the school calendar. The days are now recognized by 22 districts across Long Island.

As things stand now, Hewlett Woodmere’s Muslim families must choose between letting their child go to school, where they would miss celebrating a holy day, or miss school to celebrate Eid, when they would be responsible for completing missed schoolwork along with their regular schoolwork. It’s a difficult decision, according to members of District 14 Eid Collective, a group established in 2016.

Three family members of district students, Afroz and Sabir Rasheed and Shahnaz Mallik, attended the Nov. 17 Board of Education work meeting to support their fellow Eid Collective member Haseena Mooppan as she expressed her concerns about the district’s failure to acknowledge the holidays. “We feel that the board has completely ignored us the past few years,” said Mooppan, a Hewlett resident.

The first proposal for Eid to be added to the district’s school calendar was submitted by Mallik, of Woodmere, in February 2017.

The following year, the Muslim holidays were discussed at a few Board of Education meetings. One, in early January, attracted roughly 200 people, emotions ran high, and the backlash the requests for recognition generated among some Hewlett-Woodmere residents raised concerns about Islamophobia. Ultimately, the board decided not to add Eid to the school calendar.

Though the decision was disheartening to those who proposed a change, they have not given up on the effort. Recently, nearly 100 members of the collective wrote a letter to fellow residents, asking them to sign an online petition in support of adding Eid to the calendar.

The petition, created by collective member Dr. Amara Mallik, a district parent and Shahnaz Mallik’s daughter, had nearly 800 signatures as the Herald went to press.

“We are not asking for special consideration,” the Eid Collective wrote on their latest proposal, which can be found on the petition link. “Instead, we are asking the district to honor its diversity, equity, and inclusion statements by giving ALL students the right to practice their faith traditions, worry-free, with a day off from school.”

The Muslim population of Nassau County has grown by .83 percent in the past 10 years, according to the Public Religion Research Institute. In its inaugural 2020 Census of American Religion, the Institute found that just over 27,000 of 1,357,000 county residents are Muslim.

Collective members point to the district’s shared vision and core values listed on its website, which include valuing diversity and inclusion and creating a learning environment in which students can be respected despite their individual differences.

“It’s one thing where you put it the language of all these policies,” Sahar Hussain, a Collective member and a parent of three district students, said, “but it’s another thing when you actually put it into action to show commitment.”

The Hewlett-Woodmere Board of Education has said it would revisit the proposal to add Eid to the 2022-23 calendar at its Jan. 12 work meeting.

“We are residents of this community, and we can’t continue to be dismissed,” Dr. Mallik said. “Our concerns matter, and so do our holidays.”

To read the letter written by the District 14 Eid Collective, go to https://bit.ly/3xcKDtk.

Have an opinion on adding the Eid holidays to the school calendar? Send a letter to jbessen@liherald.com.