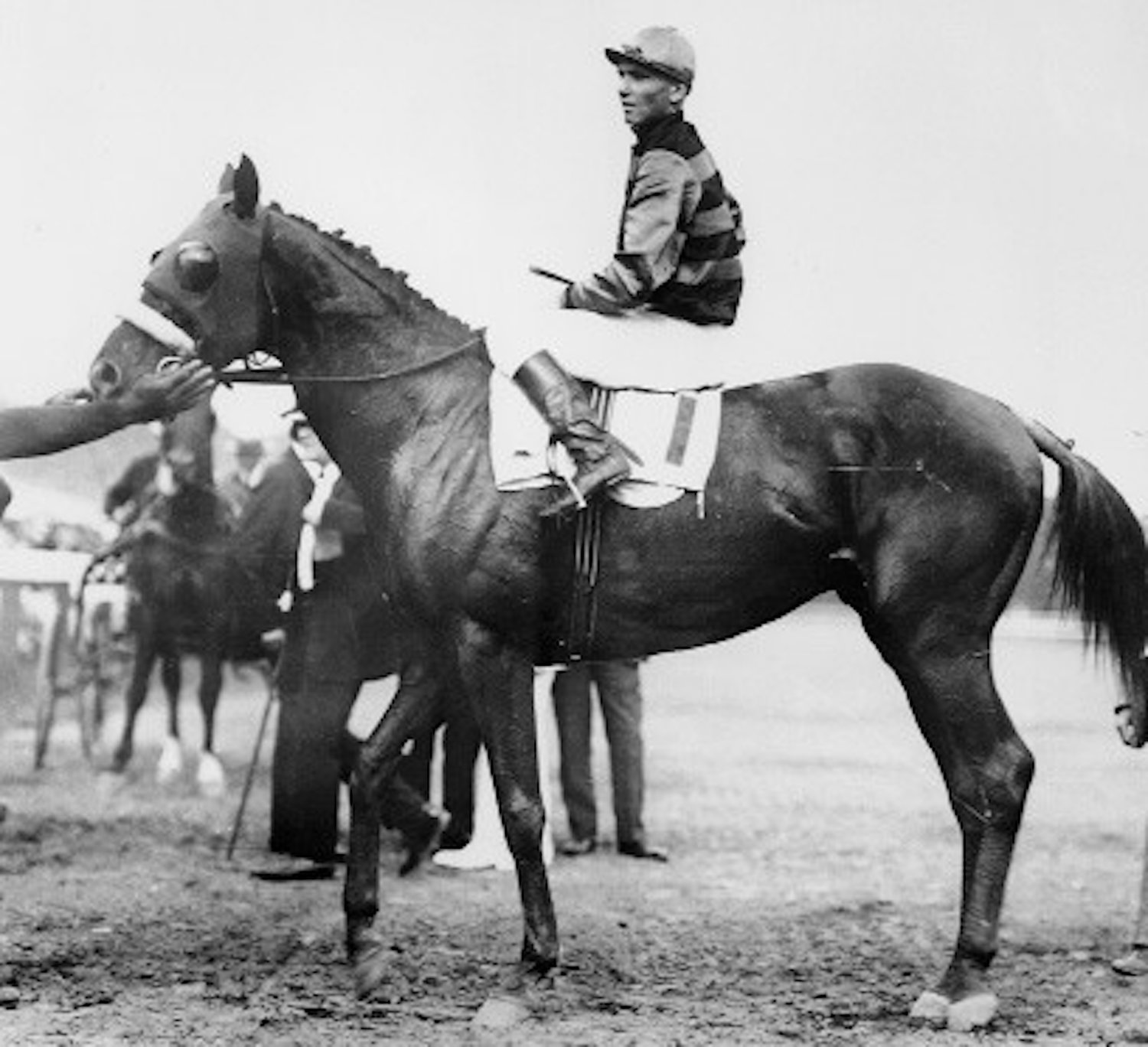 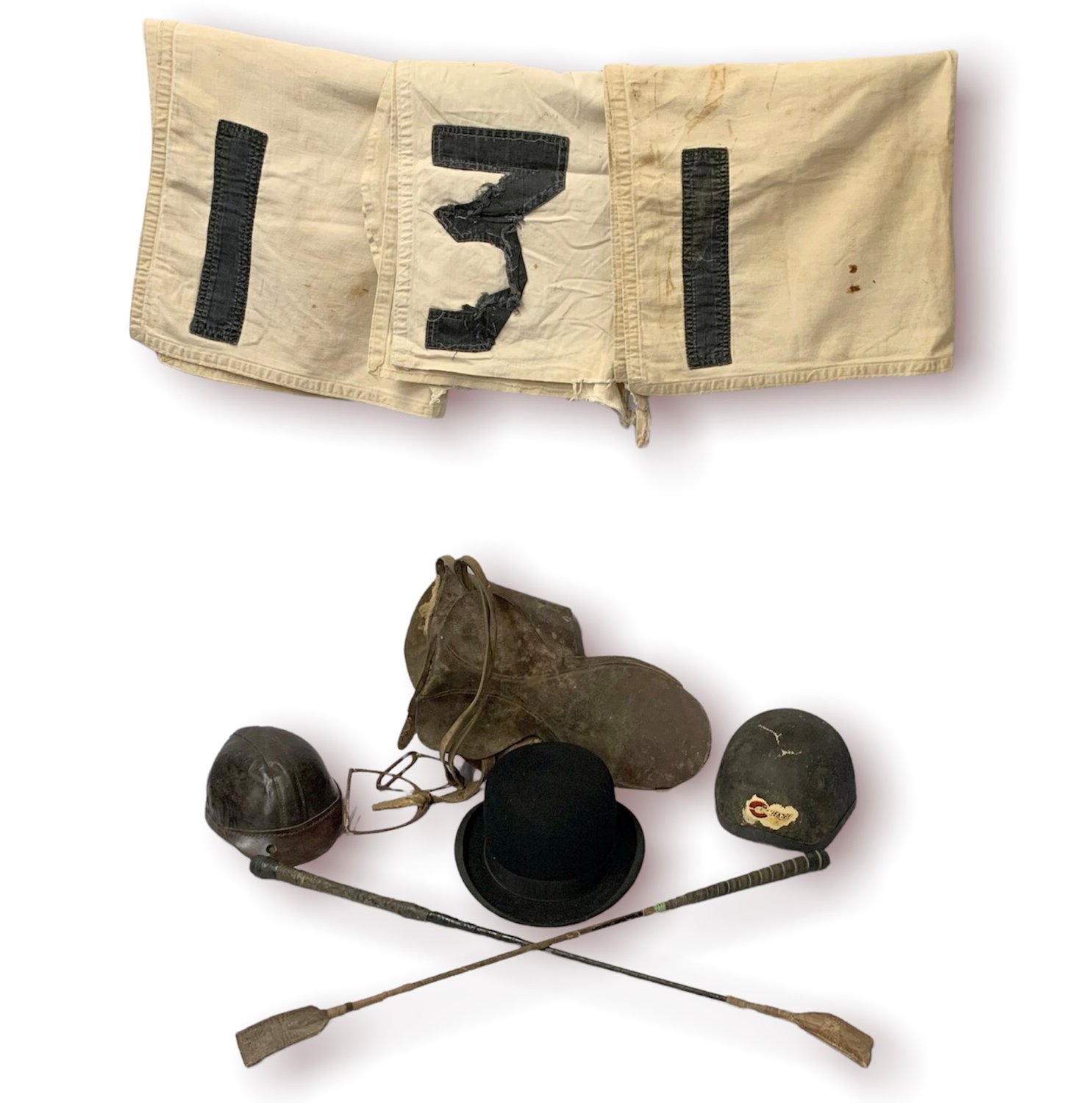 The items that will be auctioned.
Courtesy Weiss Auctions
Previous Next
Triple Crown winners

A Missouri woman unknowingly dipped into the discovery of a lifetime a decade ago at an Arkansas flea market. The. treasures she uncovered belonged to the fabulous history of Sir Barton, the first horse to win racing’s Triple Crown, in 1919.

The items, including blankets and a saddle, a jockey’s helmet and a trainer’s hat, will be auctioned Thursday at Weiss Auctions in Lynbrook, two days before this year’s Kentucky Derby.

The consignor of the items, who asked to remain anonymous, discovered the items while travelling through Arkansas on her way home to the Ozark Mountains of Missouri. She said she typically stops at flea markets in search of antique hats and sunglasses, and on that occasion, she found a dusty black top hat that caught her eye. She learned that the hat was part of a lot that had to be sold all together.

Having a background in horseracing, she noticed saddle blankets, a saddle, crops and other items, and decided to buy them because she planned to have a dedicated horseracing display in her home someday.

When she returned to Missouri, she stored the items in a tub. Years later, when she went through them, she made a fascinating discovery.

“I was looking at the saddle, thinking I might cut it in half to mount it on the wall, when I turned over the leg saddle flap and barely noticed something there inscribed in the leather,” she recalled in a news release. “It read, ‘Sir Barton.’ I gasped. I may have screamed. I was in shock.”

“If this was a baseball item, you’d make it the equivalent of a 1920s Babe Ruth uniform,” Weiss Auctions owner Philip Weiss said. “The most important part of horseracing is the Triple Crown, and this was the first acknowledged Triple Crown winner in history, so it’s pretty historic.”

Sir Barton was a chestnut colt bred in Kentucky by Jon E. Madden at Hamburg Place Farm, near Lexington. In 1918, Madden sold Sir Barton to JKL Ross, a Canadian businessman, for $10,000. A year later, on May 10, 1919, the horse won his season debut as a maiden in the Kentucky Derby.

The next day, he was shipped to Baltimore, where he won the Preakness Stakes four days later. Sir Barton went on to win the Withers Stakes in New York and then the Belmont Stakes on June 11 to complete the first Triple Crown.

The four victories came in a 32-day span, and Sir Barton was retroactively honored as 1919’s Horse of the Year. His first loss came later in 1919 at the Dwyer Stakes, but Sir Barton finished 1919 with $88,250 in winnings, notching victories in five of his 12 races.

Through further research, she found that after Bedwell died, his son, assistant trainer Leonard Bedwell, moved to a farm in Arkansas, just off the highway where she later discovered the items.

“I then very carefully stored and protected my newfound treasures,” she said. “I knew I had something special.”

She added that she kept quiet about the discovery, revealing the lot only to close friends and her brother, and she never cleaned the items.

Weiss said that while he couldn’t verify beyond a doubt that the items belonged to Sir Barton, he has conferred with horseracing historians and collectors, and it is believed the items were used in training and other races, but not the Triple Crown events. He said one of the helmets post-dates the type jockeys wore in 1919 and was likely worn by Loftus in the years after the Triple Crown, and the saddle blanket with the No. 1 on it — Sir Barton’s number — looked like a match for the horse’s size. He also used old photographs to match some of the items to the horse and jockey.

Weiss, who has been in the auction business for more than three decades, moved his auction house to Lynbrook in 2012 after its Oceanside headquarters were heavily damaged in Hurricane Sandy. He said he has been a horseracing aficionado for many years, and used to handicap races for New York newspapers. He also spent a lot of time at Saratoga through the years.

The consignor was referred to Weiss Auctions by one of Weiss’s customers, he said, and he spent several months researching the items before feeling comfortable enough to auction them. Also offered in the sale will be rare early 20th century boxing card uncut proof sheets, a collection of Zaccagnini Disney figurines, and an early original Charles Schulz Peanuts daily strip. Internet bidding will be coordinated by LiveAuctioneers.com and Invaluable.com.

Weiss said that he has auctioned several horseracing items through the years, but the fact that the consignor was in the right place at the right time to land Sir Barton’s lot was special.

“It’s like a perfect storm, and everything that needed to happen happened,” he said. “It’s an iconic piece of history.”