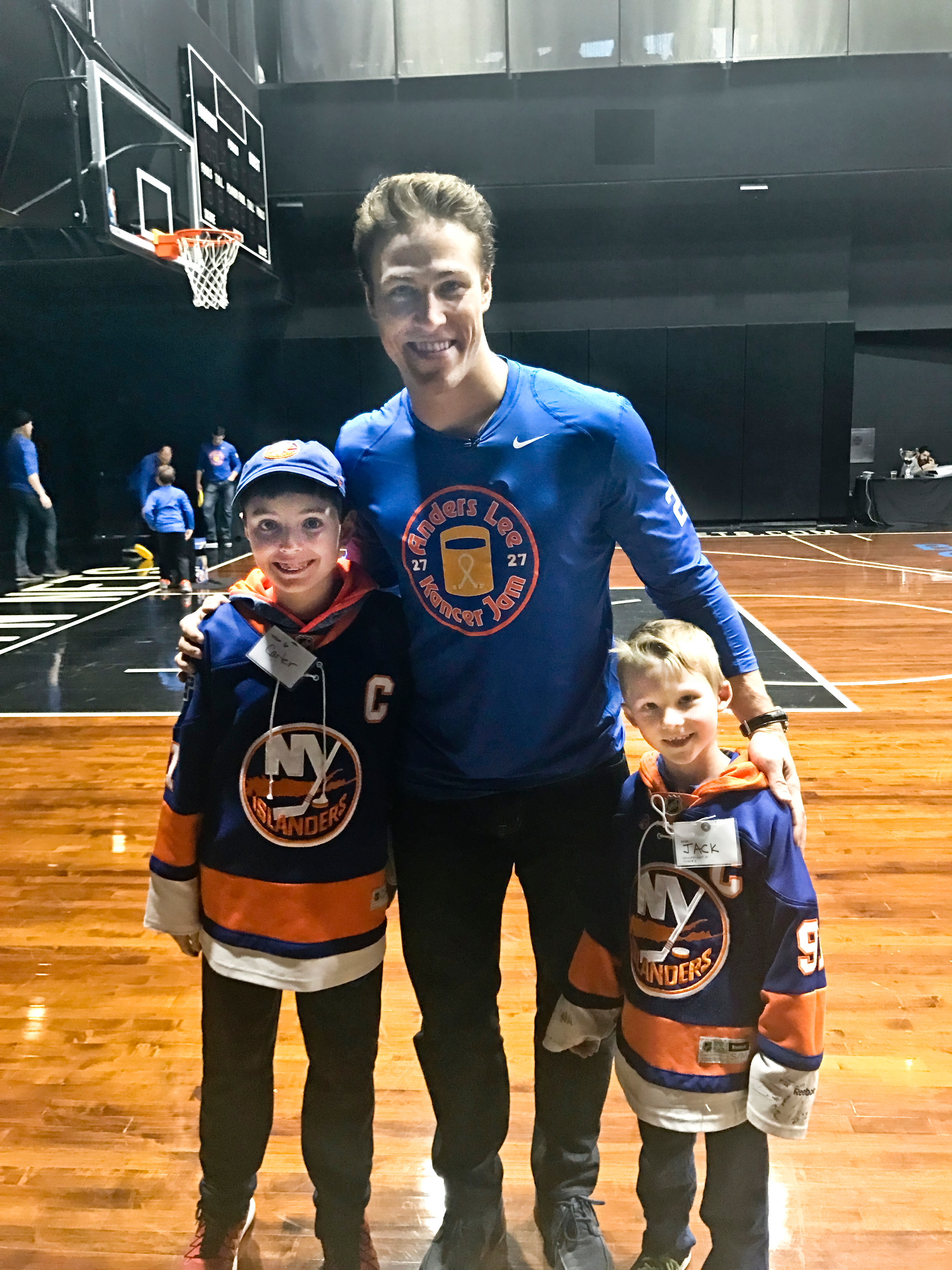 Carter LaCorte, left, of Northport, and Jack Doran, of Lynbrook, met Islanders forward Anders Lee at his inaugural Kancer Jam event and mingled with other NHL players after raising more than $2,600 for a Queens children’s medical center.
Justin LaCorte

It was just an overwhelming, overly positive experience for someone who is at Jack’s age, to only be 6 years old and to be just getting into hockey. Hopefully it will inspire him to do even more great things.”
Christine Doran, Lynbrook resident
By Mike Smollins

Lynbrook resident Jack Doran, 6, wasn’t sure what he was getting into when he registered for the inaugural Kancer Jam tournament fundraiser on March 18 — organized by New York Islanders forward Anders Lee — except that he would meet some of his hockey heroes and raise money for a good cause.

“We didn’t even know what Kan Jam was,” Jack’s mother, Christine, said with a laugh, referring to the two-on-two game in which players attempt to score points by throwing or deflecting a Frisbee into a can. “We had to look it up.”

Jack, a first-grader at West End Elementary School, collaborated with his friend Carter LaCorte, 10, of Northport, a fifth-grader at Norwood Avenue School, in the fundraising effort. To participate, the children needed to raise at least $2,000 together. All donations went to pediatric cancer research and equipment for Cohen’s Children’s Medical Center in Queens, where Christine and Carter’s father, Justin, were once pediatricians. Both now work at ProHealth Pediatric Urgent Care in Wantagh.

As part of the fundraiser, participants received free tickets to the Islanders game against the Columbus Blue Jackets on March 18, which included entry into the tournament after the game. The Kan Jam event had 32 teams, comprising participants involved in the fundraiser and Islanders players.

The boys began collecting donations on March 1. Carter used social media, and asked relatives for help. Christine said that she and Jack turned to local businesses, and received donations from the Lynbrook Deli; Dr. Doug Orthodontics in Rockville Centre; and Orlin & Cohen Orthopedic Group in Lynbrook. “We were very happy for the local support,” she said.

Jack and Carter raised about $2,600 before the event, making them one of the top four fundraising teams in the competition. “The minimum participation was $2,000, so that was our goal,” Christine explained. “We exceeded it, which we were very happy with, and there were extra incentives for those who raised a little bit more.”

Jack and Carter were invited to sit in the owners’ box with Islanders legends, including Stanley Cup winners Clark Gillies and Bryan Trottier, and co-owner Jon Ledecky. They also got to high-five current players as they skated out to start the third period.

Carter said he met four-time Stanley Cup champion and former Islanders captain Dennis Potvin. “He doesn’t usually come to the games; he’s usually doing the Panthers broadcast,” Carter said, adding that he writes a sports blog at Carterhud.com and interviewed some of the players for it.

Though the Islanders lost 3-2 in overtime, the day was only beginning. After the game, Jack, Carter, Christine and Justin went to the Brooklyn Nets practice court at Barclays Center for the Kan Jam tournament. There they met and mingled with every current Islanders player. Jack and Carter played alongside Islanders defensemen Johnny Boychuk and Travis Hamonic, and against other Islanders.

“It was a big day,” Carter said. “From sitting in the owners’ suite to getting to interview everyone. It was just great to help the community and kids with cancer, and to finally get to meet all the players.” Jack and Carter both play hockey, and they said it was a thrill to meet NHL stars.

Jack added that he got his blue Anders Lee jersey signed by all the players, including his favorites, captain John Tavares and Lee himself. “He asked if I was having fun and thanked me for raising the money,” Jack said of Lee. The boys also said that they were touched by a speech by Fenov Pierre-Louis, 16, who has battled neuroblastoma for nearly eight years. He spoke to the crowd right before the tournament started.

“It’s hard to find a favorite thing,” Justin said. “We were leaving and we were like, the 20th best thing we did today would normally be the best thing you did in your life. We met some of the old players, the legends. We sat in the owners’ box. … Everything was piled into one day. It was crazy.”

The event raised more than $100,000 for the medical center, surpassing expectations, according to Ann Rina, the Islanders’ community relations director. Lee, who is in the midst of his most productive season for the Islanders, expressed his gratitude.

“It shows how good of a community we have and the relationship we have with our fans that jumped on board to fundraise and get behind this cause,” he said in a release.

Christine and Justin both expressed pride in their children for helping a good cause. “It was just an overwhelming, overly positive experience for someone who is at Jack’s age, to only be 6 years old and to be just getting into hockey,” Christine said. “Hopefully it will inspire him to do even more great things.”