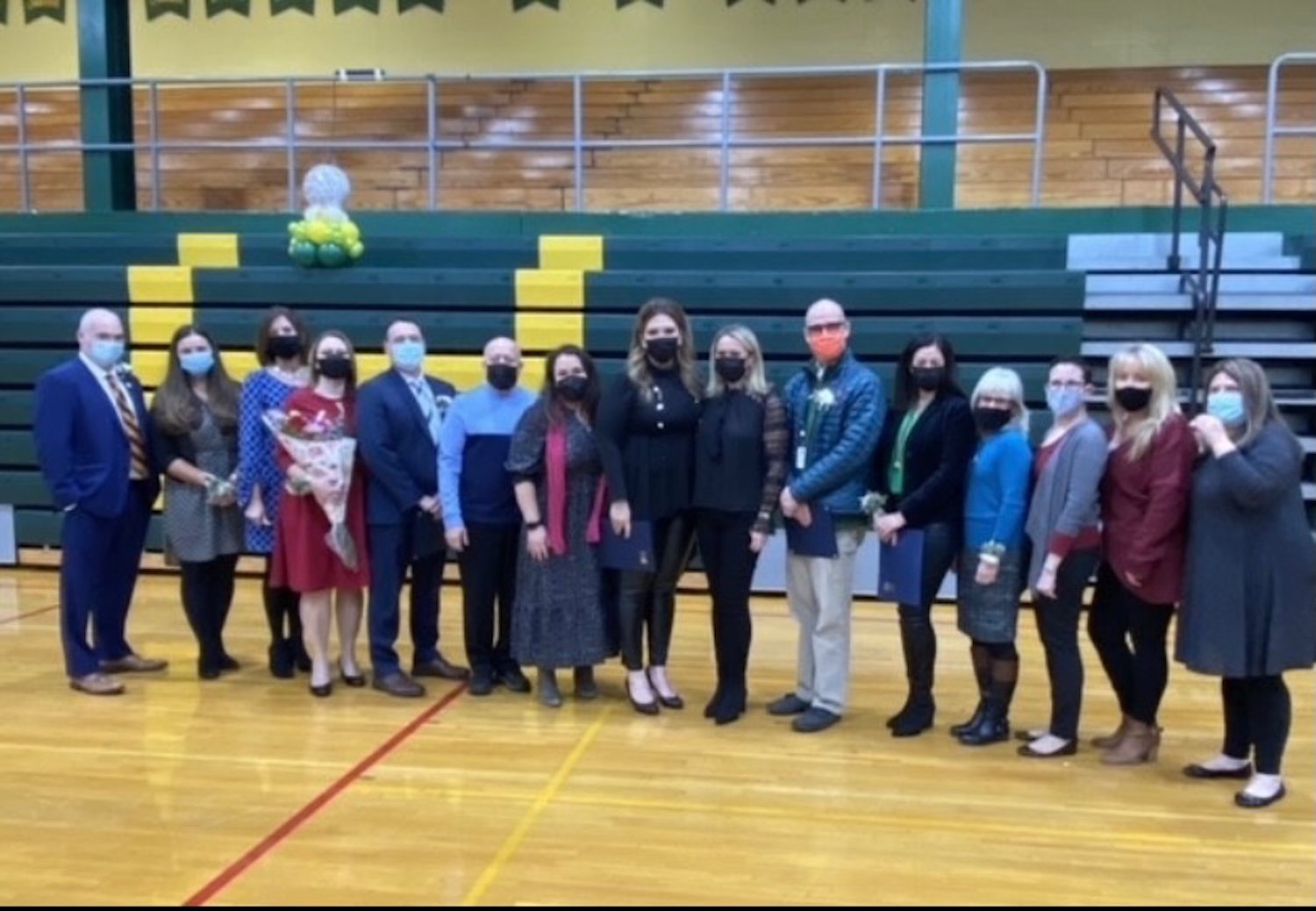 The Lynbrook School District honored those who give back to the community by volunteering in the PTA with a Founders’ Day celebration Feb. 1.
Julia Swerdin/Herald 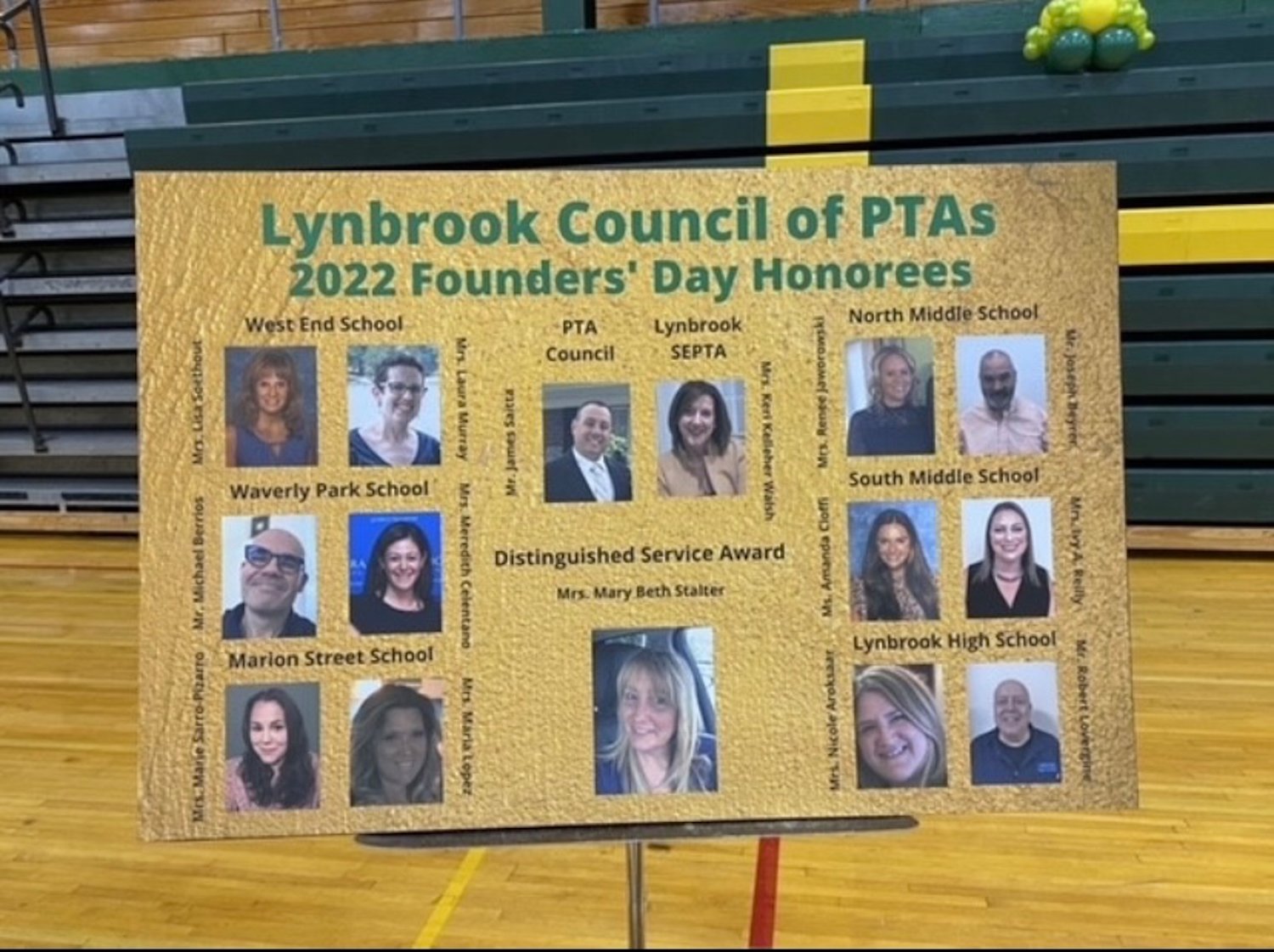 For more than 110 years, February has been the month to remember the Parent Teachers Association’s founders and celebrate local PTA leaders, and the Lynbrook school community came together Feb. 1 to do just that.

Lynbrook School District PTAs recognize Founders’ Day each year by honoring those who have made selfless contributions to the schools and community. Founders’ Day commemorates the day in 1897 when 2,000 people established the National Congress of Mothers, which was later known as the National Congress of Parents and Teachers, and eventually the PTA, to promote the welfare of children in the home, school and community. The Lynbrook Council of PTAs organized a ceremony to recognize this year’s honorees in the Lynbrook High School gymnasium.

Honorees represented PTAs from each district schools and the Lynbrook Special Education PTA.

Laura Murray, the Council of PTA’s co-president, received the Honorary Life Membership award from the West End Elementary School PTA. She has filled many volunteer roles at the school over the years, including as its Kindergarten Center liaison, recording and corresponding secretary, and representative on the Compact and Curriculum Committee.

Lauren Bowler, who presented Murray with the honor, noted that she “always makes sure to advocate for what is best for children and parents.” Whether it is organizing food sales, back-to-school picnics, class parties or fundraisers, Murray often works to foster a school atmosphere of “inclusion and fairness,” Bowler said.

Social studies teacher Joseph Beyrer was awarded Honorary Life Membership by the North Middle School PTA for his “love for education and love for the Lynbrook community,” said presenter Tina Gerbi. Beyrer has taught sixth- and seventh-grade social studies, as well as mock trial, CSI and great books elective courses, sports medicine and CPR. He now splits his time between the middle and high schools, teaching Participation in Government at LHS.

Many Lynbrook students also know Beyrer as the girls’ cross-country and winter and spring track team coach for the past 18 years. In 2019, he was awarded the Nassau County Coach of the Year, and his teams have won 23 championships in his time as coach. Beyrer recently became curator of the LHS Athletic Hall of Fame and the district’s equipment manager. Additionally, he started the giving tree at North Middle, a project that spreads Christmas cheer to underserved children and families around the holidays.

Council of PTAs Treasurer Mary Beth Stalter received the final honor of the night, the Distinguished Service Award, for her “outstanding contributions to the welfare of Lynbrook students and to the PTA Association,” presenter Joanna Santoli said. The honor is given to an individual who has previously received an Honorary Life Membership and continues to devote him or herself to the community.

Stalter has served as PTA president at Marion Street and LHS; vice president of PTA membership at South Middle School and LHS; treasurer for the Grace Play School, Marion Street, South Middle, LHS, the PTA Council, Lynbrook Hoops Club and the Lynbrook East Rockaway Soccer Club; and Kindergarten Center liaison; among other roles. She has made notable volunteer contributions to multiple organizations, including the Headstrong Foundation, Mondays at Racines, the SIBS Foundation, the Dig Pink Foundation, Hoops for Hope and the Nassau Suffolk Autism Society.

Since the onset of the Covid-19 pandemic, Stalter has worked especially hard to organize fundraisers and events for LHS students, including the “Pave a Path” Scholarship Campaign that raised nearly $100,000 for graduating students.

“It has been a pleasure to volunteer alongside Mary Beth,” Stalter’s friend and fellow honoree Nicole Aroksaar said. “She is a true force to be reckoned with ... Mary Beth’s constant hard work and care for the Lynbrook students make her most deserving of this highly distinguished honor.”

Stalter’s son, Dylan, is a LHS senior, and he spoke highly of his mother’s dedication to Lynbrook schools. “I’m very proud of my mom,” he said. “She’s always doing whatever she can to get involved in the community, so she deserves this award.”