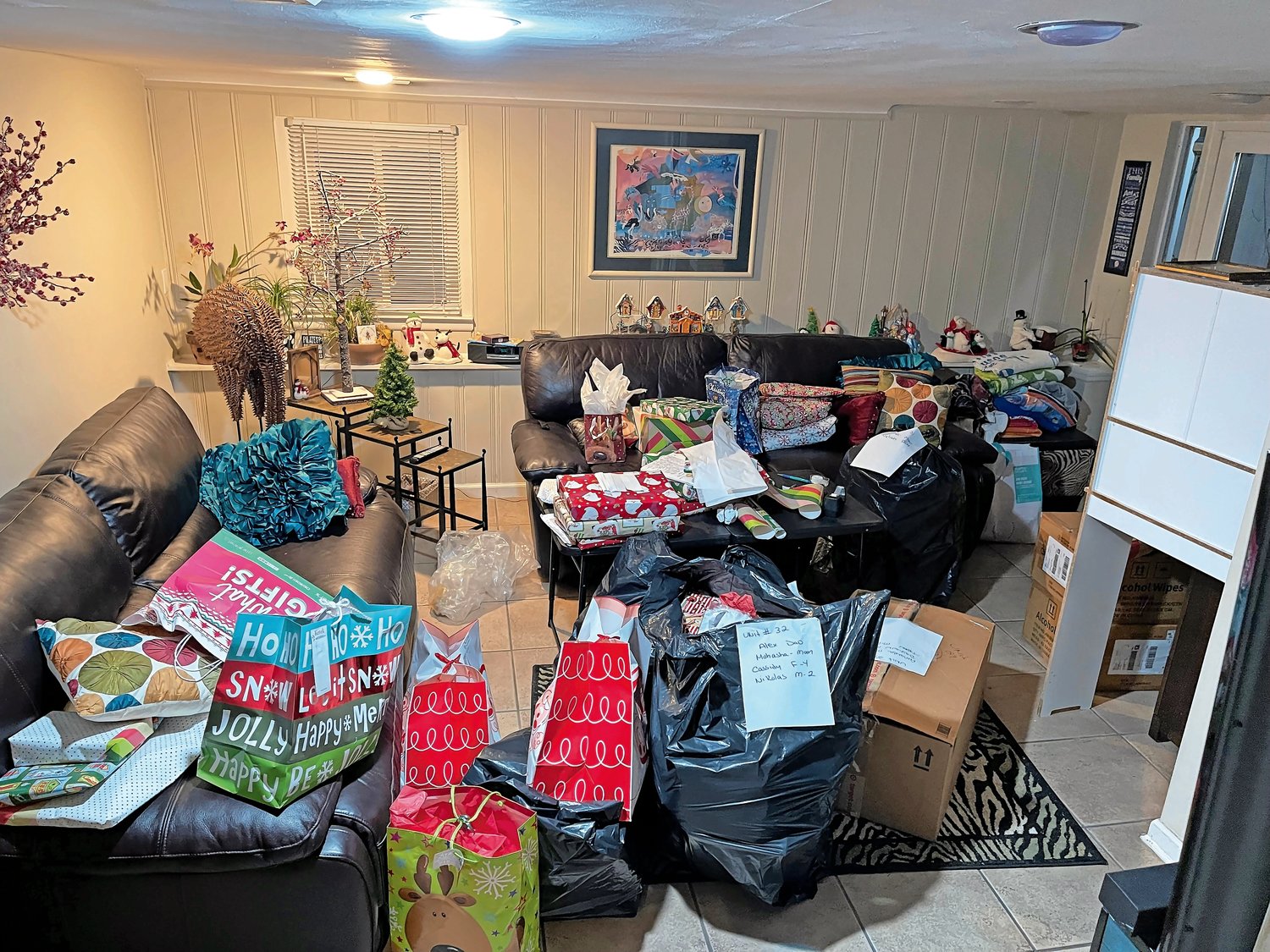 Gail Mancuso’s living room was filled with some of the many gifts collected.
Courtesy Gail Mancuso
Previous Next

We know we made a difference for a lot of kids and a lot of parents.”
Pat Alonge
By Ben Fiebert

Lynbrook residents Pat Alonge and Gail Mancuso continue to be amazed by the spirit of giving in their community.

Carrying on an annual charitable tradition, Alonge and Mancuso made a Facebook post on Thanksgiving Day, asking the Lynbrook community for help. They listed 27 shelter families from which people could choose, and send them items on their wish list.

What was supposed to be a regular, run-of-the-mill donation event turned out to be something much bigger.

“Both of us are overwhelmed by the generosity and the goodness that we see out there,” Alonge said. With over 1,000 presents wrapped, Mancuso’s living room, backyard, den, and basement were filled with garbage bags full of donations. Donation quantities like these aren’t new to Alonge and Mancuso, because both have been doing charity events for years now.

“I want to say we have been doing this since 1991,” Alonge said. “And it has morphed into something much bigger.” Alonge  became involved with donating through her local church. When a child asked for something out of the reach for most people, she called Mancuso to help.

“From that day on, Gail and I have been doing this together,” Alonge said. With help of Mancuso, both found families to send items to during the holiday season. More recently, they have worked with a social worker to help donate items to a shelter in Smithtown.

Mancuso said that 30 families’ worth of gifts were given out in the shelter, with four or five gifts given to every person in the family.

According to Alonge, the temporary shelter was once a hotel, so families are living in a 12-by- 12 rooms. She hopes the donations can help them find permanent residences.

‘We can’t fix every problem,” Alonge said. “But just for that one day where we dropped off all the donations, it feels like magic for the families we take care of.” Along with 30 shelter families receiving gifts, Alonge and Mancuso were able to gather donations for Lynbrook families who needed help this holiday season.

“Then we had a Lynbrook mom reach out to us. Then it became two Lynbrook moms. Then three,” Alonge said. “And we ended up being able to help, in various degrees, five Lynbrook families.” For one particular mom, Alonge and Mancuso helped remove the stress of being able to provide for her kids.

Alonge and Mancuso went to Facebook again for donations to help. “The response was immediate and overwhelming,” Alonge said.

The shelter families and Lynbrook moms became priorities for Alonge and Mancuso, who had little time to prepare for their own holidays. “Literally, right up until the Wednesday before Christmas, both Gail and I didn’t finish our holiday shopping,” Alonge said. “Neither one of us had an ornament on our trees.”

They both are focused on making this charitable work and never doubted each other. “We both have our own strengths,” Mancuso said. “We balance each other out.”

Mancuso has new plans for the donations when she does this again next year. “The unprecedented magnitude of this is why we had to have a cut off much sooner,” she said citing a lack of sleep.

“We were working on three hours of sleep,” Alonge said. “We were at Gail’s house until two in the morning and then she would stay up even later than that.”

Despite Mancuso and Alonge being overwhelmed, they expressed immense gratitude

“We are so grateful to the community and to our friends who enable us to do this every year because without them, we’d be dead in the water,” Alonge said.