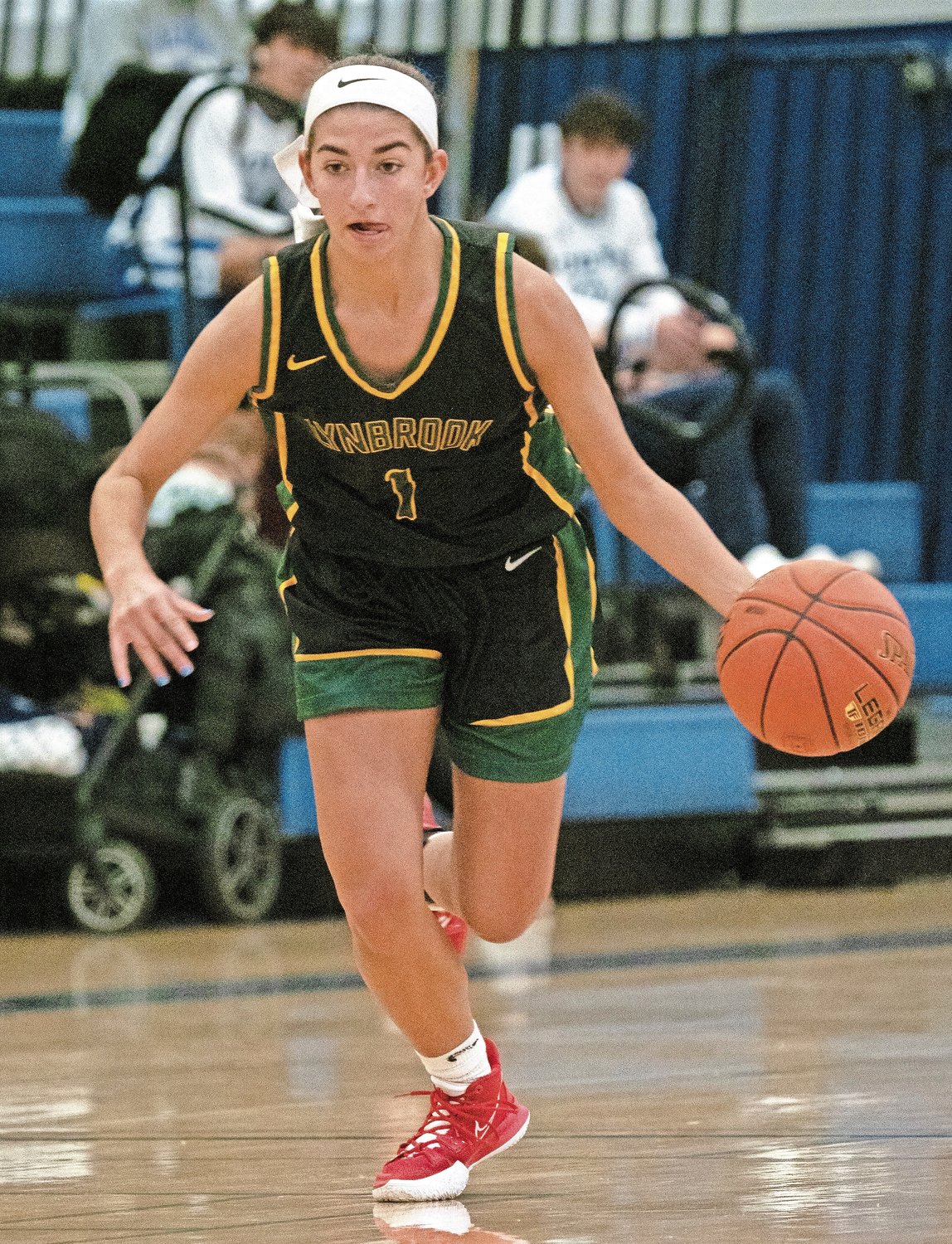 Sophomore Brooke Mazzei (16 points) was part of a big effort for the Owls in last Friday’s win over defending county champion Plainedge.
Eric Dunetz/Herald
Previous Next
By Marc Berman

Lynbrook girls’ basketball isn’t wearing its school’s name on the front of its warmup shirts.

The three senior captains, Caityblu Cavassa, Tyla Vuotto, and Kaelyn O’Brien had a better idea that underscored what this 2022-23 team is all about.

“We don’t have Lynbrook on the front of the shirt,’’ head coach Stephen LoCicero said. “We have “Family’’ with the Lynbrook owl. That was the choice of the girls. I’m ecstatic how well they enjoy playing with each other and their energy, how great we play defense and consistently scoring 60-plus a game.’’

It’s been a dreamy season so far – living up to the huge expectations LoCicero set in preseason when he predicted this squad could be a candidate to win the state title. The campaign has also included LoCicero gaining his 100th career victory as the second-winningest girls basketball coach in Lynbrook history.

The Owls have raced to a 11-2 start – 5-1 and first place in the rugged Conference A4 after a convincing 62-50 victory over defending county champion Plainedge last Friday.

But the beauty of this bunch is there isn’t a consistent leading scorer. In 8 of the 13 contests, there’s been a different one. Sophomores Kate Benedict and Cate Jennings have taken turns too.

“We don’t use leading scorers as an indication of anything,’’ LoCicero said. “Other teams might do that. We don’t. We play team basketball. On any given night, anyone can be leading scorer or top assist getter.’’

LoCicero is so hardcore about not citing individuals, he refuses to divulge scoring stats that aren’t team-related. And those team stats happen to be glorious

Lynbrook is scoring 60.1 points per game, allowing just 47.2 points. They are taking 70 shots a game - a demonstration of its fast tempo.

In addition, the Owls are shooting 32 percent from 3 – a sparkling number for girls basketball. They are also dishing out 16.1 assists and making 18 steals on average.

“It’s everything we thought it would be,’’ LoCicero said. “It’s rare a team can go undefeated especially in A4. One of the things I love about the team, they’ve responded to every challenge together as a family.’’

LoCicero is thrilled at the senior leadership provided by his captains. But there was one blip - a heartbreaking 74-67 loss last week to Floral Park. Lynbrook led by 9 with four minutes left before Floral Park got hot from 3.

LoCicero also pointed out the free-throw discrepancy with Floral Park shooting 30 to his club’s 15. Ironically, the team scoring that night wasn’t as balanced as Mazzei netted 22 and O’Brien 19 – which is atypical.

The rematch is Feb. 7 and they could meet a third time deep in the county tournament.  Last season, Floral Park knocked out Lynbrook in the county semifinals.

Lynbrook, Floral Park, Bethpage and Plainedge all reside in the stacked Conference A4 and made up the entire semifinal bracket last season in the counties. Each squad is poised to make another run.

Lynbrook will play its season finale against Plainedge on Feb. 10 in what could be a battle for the regular-season title.

“It’s always the roughest conference in A,’’ LoCicero said.