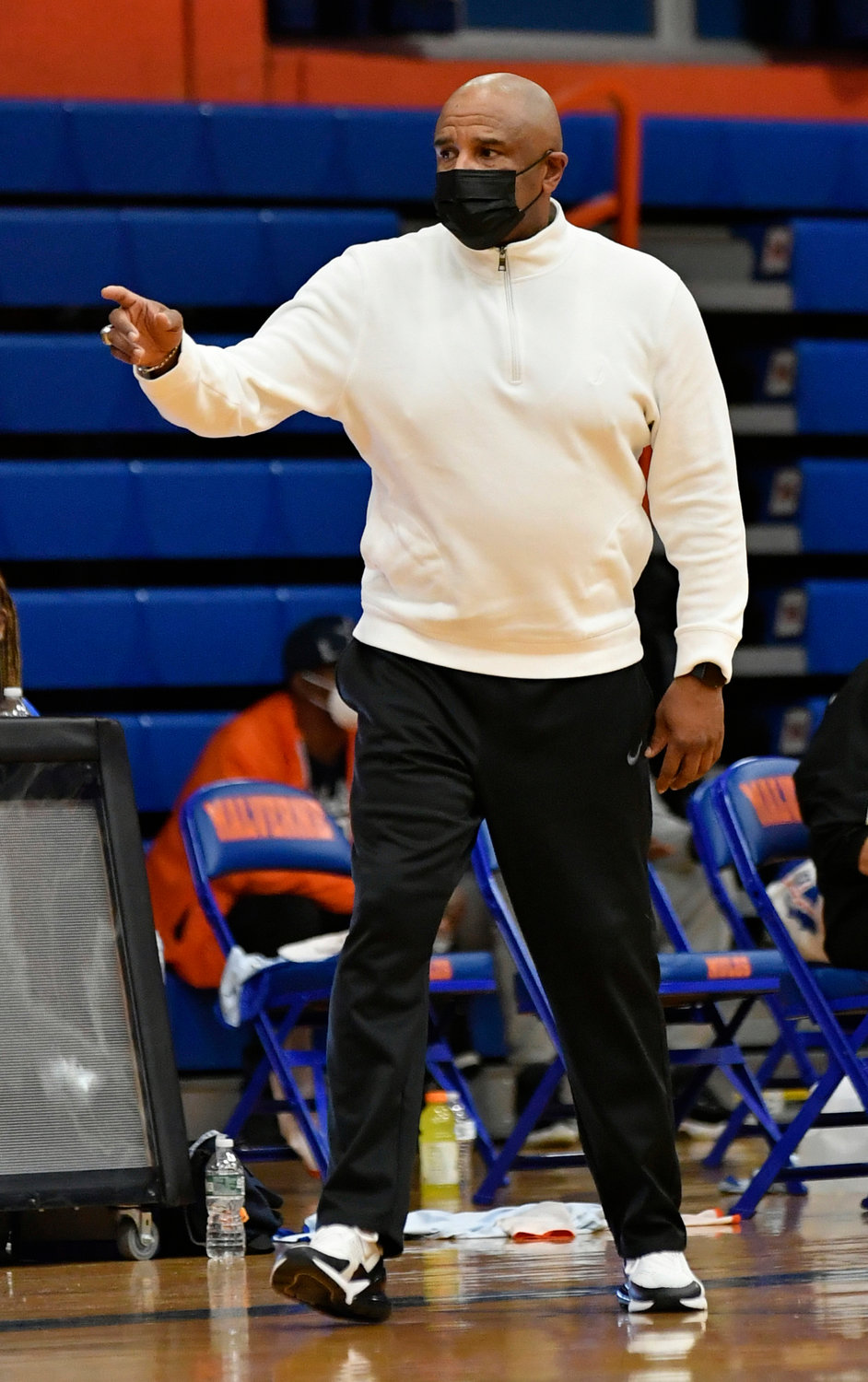 Malverne boys' basketball head coach Darrol Lopez entered the season four wins away from reaching 300 for his career and got the historic victory Dec. 29.
Anthony Hughes/Herald
By Tony Bellissimo

The Mules, who trailed by eight points early in the third quarter, closed the gap to one entering the fourth and then outlasted the Indians down the stretch for a 60-56 win. Senior Trey Robinson, the tourney MVP, scored 6 of his team-high 25 points in the final 2:30 including a short jumper in the lane to put the hosts ahead for good. Senior DeAndre’ Blagrove (17 points) had a steal on Manhasset’s final possession and threw down an emphatic dunk at the buzzer to cap Lopez’s milestone accomplishment.

“I never made any goals to reach 300 or 200 or however many wins,” said Lopez, a 1983 Malverne graduate and three-year varsity player under Williams. “It’s about trying to win county and Long Island championships and getting upstate,” he added. “This just happened along the way. What 300 means is Hank and I now have 750 wins together.”

Lopez, who took over as head coach of the Mules in the 1999-2000 season, entered this campaign four wins shy of the plateau. He was presented with a plaque at midcourt following the game by Malverne Athletic Director Michael Pelan.

The Mules, who beat Glen Cove on the first day of the tournament, led Manhasset 15-11 after the opening quarter and increased their advantage to 23-15 midway through the second after sophomore Chad Wesley sank a pair of free throws and junior Joshua Croom followed by swishing two technicals.

The Indians rallied, however, and it was tied at 25 at halftime. Liam Connor, who had 15 points, scored half of Manhasset’s points during a 10-2 spurt to close the half. He and Liam Buckey (23 points) then carried over the visitors’ momentum into the third quarter as they raced to their largest lead of the night, 35-27, following a Buckey trey.

“They’re a high-quality Class A team,” Malverne assistant coach Walter Aksionoff said of Manhasset. “They had a much better shooting night from the outside than we did, but we’re still going to keep shooting our share and also get the ball inside to Trey and DeAndre’.”

The 6-foot-7 Robinson (7) and 6-4 Blagrove combined for 13 points in the third and led the comeback along with fellow senior Norman Brown and junior Farvens Ulysse. Senior Keondre Greene hit a key basket in crunch time as well.

“This was a statement game,” Lopez said. “We play everybody hard. We’re going to come at you hard whether you’re a AA school, an A school or a B school.”

Lopez has guided Malverne to 12 county titles, six Long Island crowns and one state championship (2006-07.) In his first season at the helm, the Mules won Nassau and L.I. and reached the state final where they lost by one point to two-time defending champ to Buffalo Traditional.