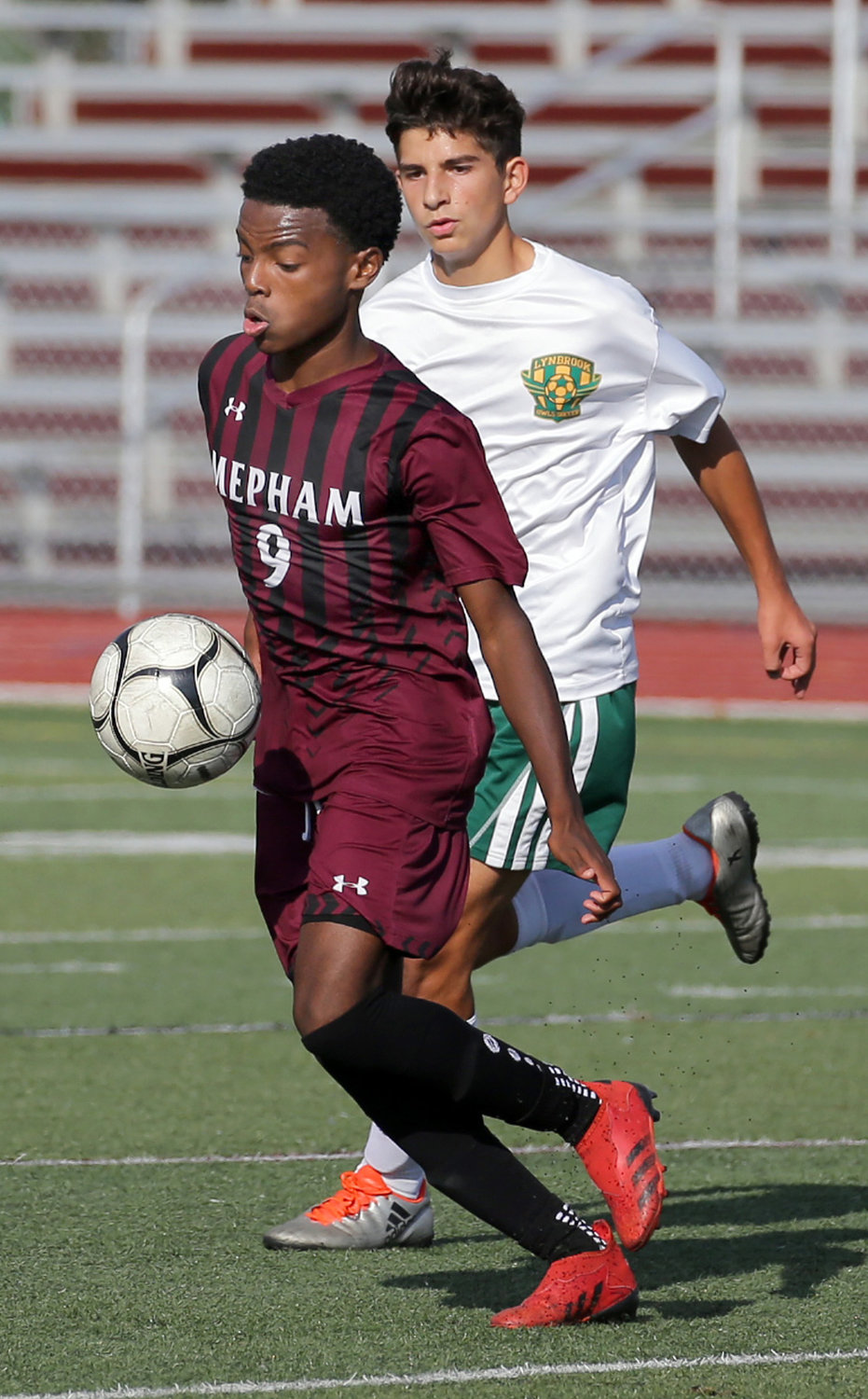 Junior Deshaun Maitland, the leader scorer for a deep Mepham side, picked up an assist in its 2-0 win over Lynbrook in last Friday's Nassau Class A playoff opener.
Brian Ballweg/Herald 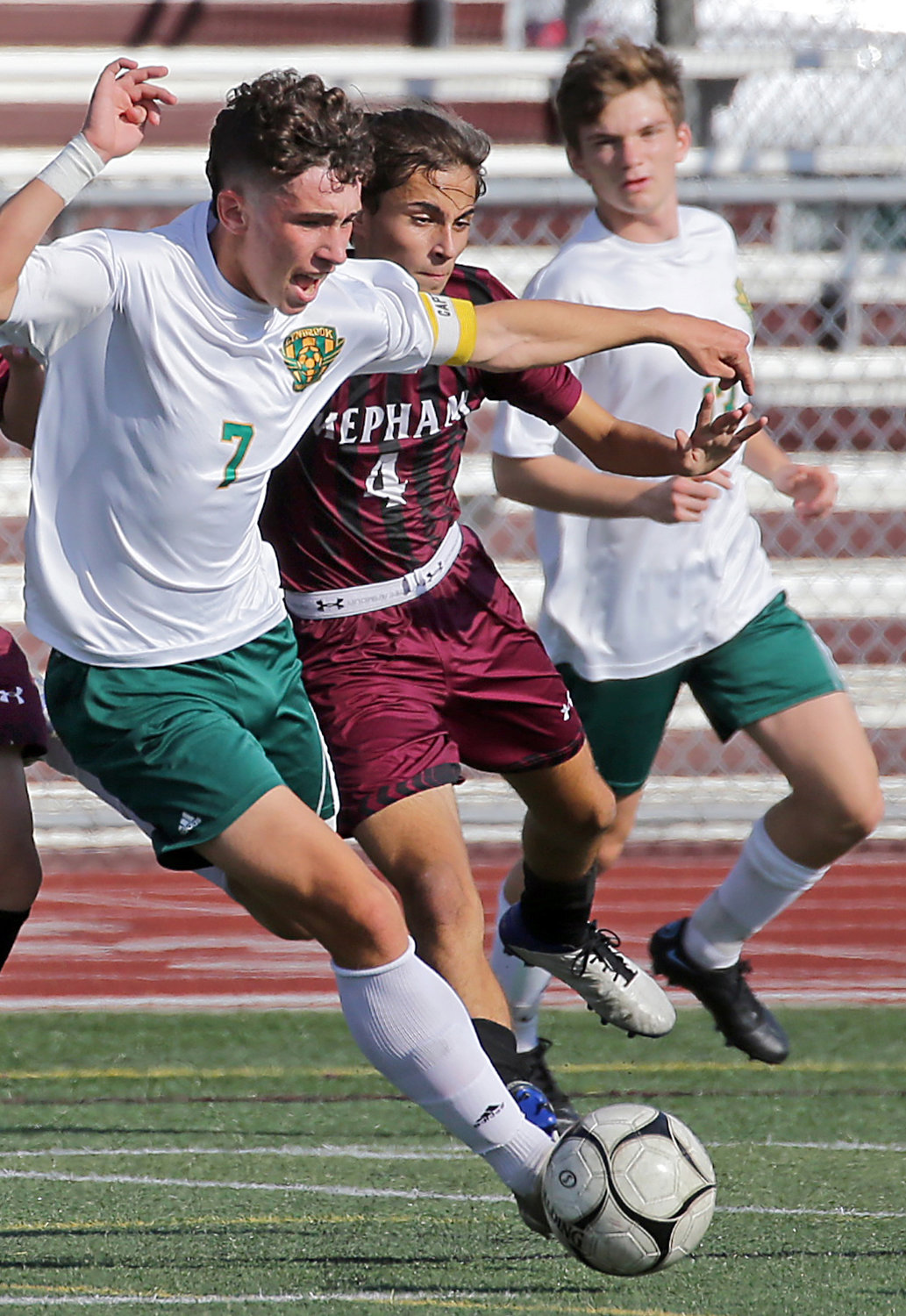 In search of its second Nassau Class A boys’ soccer championship in four years, Mepham took the first step many lower seeds couldn’t in the first round last Friday afternoon by scoring twice midway through the first half and holding off a late push by Lynbrook for a 2-0 victory.
The Pirates, who shared the Conference A1 title with MacArthur, earned the No. 7 seed but was only three of eight home teams to advance to the quarterfinals. Top-seeded South Side, No. 2 Mineola, No. 4 MacArthur, No. 5 North Shore and No. 8 Lawrence were all eliminated.
“All of us want to be in these kinds of games and all of us want to win,” said junior midfielder Konstantinos Karousis, who gave Mepham (9-0-4 overall) its two-goal cushion in the 22nd minute. “Our confidence level is very high,” he added. “We came out aggressive and pressing. Once we put in the goals and got the lead, we did our job to hold it.”
The Pirates were to host No. 15 Roosevelt in the quarterfinals after Herald presstime, with a spot in this Friday’s semifinals at Mitchel Athletic Complex going to the winner. The county final is Nov. 3 also at Mitchel.
“It was difficult to advocate for individual awards because our talent is so deep and spread out,” Mepham coach Zachary Gosse said. “Our offense has come from all over the place, which is great, and we’ve only allowed seven goals all season.”


Lynbrook (7-4-2) enjoyed the better of the play in the second half but couldn’t get anything past Mepham junior goalkeeper Nicholas Parisi, who made 8 saves. It didn’t help that the 10th-seeded Owls’ leading scorer, senior Conor Lynch (8 goals, 4 assists) was banged up with a calf issue in crunch time. They got 8 stops from senior keeper Haris Sekic.
“We had a couple of tactical mistakes on defense in the first half and they capitalized on them,” Lynbrook coach Josh Berlin said. “Our kids kept battling and we were much better in the second half. We had some chances and put a few shots right at the keeper.
“Conor going down sucked a little life out of us, but I give him a lot of credit for gutting out the injury as best he could and going back in for a while,” he added.
Junior Dominic Saraceni scored in the 18th minute to give Mepham all the offense it would need as a defense led by senior Carter Chiarello, juniors Dimitri Gogas, Jeffrey Decina and Kyle Persaud, and freshman Mark Diener set the tone for its 10th shutout in 13 matches.
Juniors Deshaun Maitland and Emiliano Avalos Paz had assists. Maitland leads the team in scoring with 15 points, including 9 goals.
“I think our side of the bracket is stacked,” Gosse said. “But if we play well and play the way we’re capable, we can win it all.”