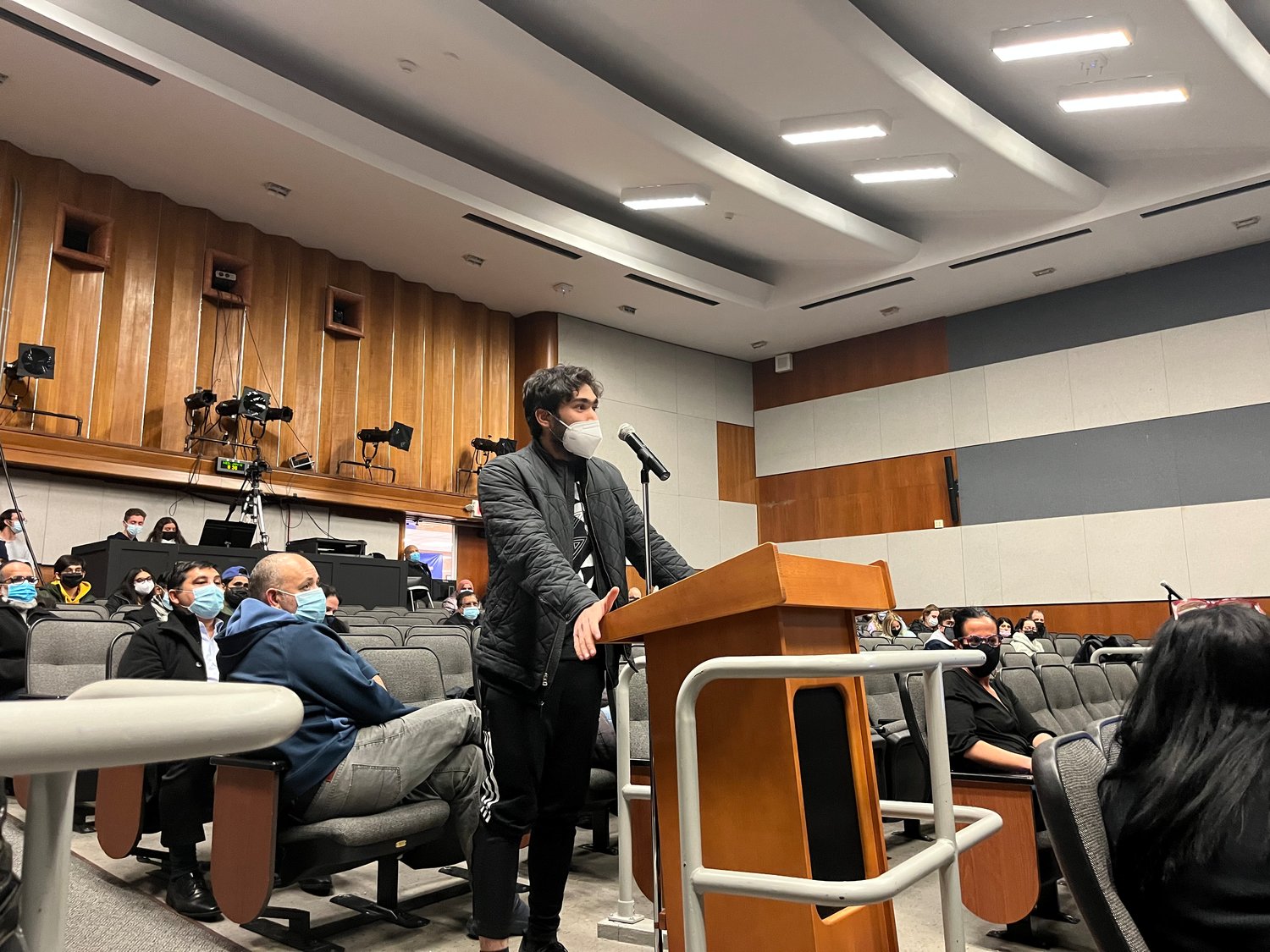 Hewlett High School senior Arib Khan expressed his opinion about adding Eid to the school calendar at multiple Hewlett-Woodmere Board of Education meetings, including the recent Jan. 12 work meeting, above.
Lisa Margaria/Herald
By Lisa Margaria

The Hewlett-Woodmere Board of Education voted on its 2022-2023 school calendar, which will not include the Muslim Eid holidays, a disappointment to more than 1,000 people who signed a petition in favor adding the holidays. After discussing three different versions of the calendar, calendar A, B and C, the board voted six-to-one for calendar A.

Calendar A was drafted with an extra snow day, totaling four, in case of a security issue that would call for Hewlett-Woodmere schools to close. Calendar A would have school begin on Aug. 31, 2022. Calendar B differed with only three snow days built into the calendar, and that school would start on Sept. 1, 2022, one day after calendar A’s starting day. Both calendars A and B have 181 instructional days. Calendar C was not drafted before the Jan. 12 meeting, but noted by board President

Debra Sheinin when Trustee Dr. Jonathan Altus, the lone vote to add Eid to the school calendar, suggested a calendar which includes the Muslim Eid holidays. Calendar C was not discussed at the Jan. 19 regular meeting and a draft of calendar C was not made public.

Many Muslim community members attended the Jan. 12 work meeting. “This isn’t just about a day off anymore, this is about representation and representation matters,” Hewlett High graduateAsma Rasheed said at the work meeting. “We have Easter on a Sunday — even though we don’t get necessarily a day off for it, it is written on the calendar — I would love to see Eid written on the calendar even if we do not get a day off for it, and I think that is a very easy compromise to make for the school district.”

In 2018, after the board discussed adding Eid holidays to the school calendar with legal counsel, it decided that there was no definite secular purpose for the addition. The board has reconsidered the holiday in 2019, when they found, again, that there was insufficient secular purpose to close Hewlett-Woodmere schools on these days.

At the Jan. 19 regular meeting, the board stuck with their decision against adding Eid holidays to the calendar based on legal counsel.

Sheinin thanked everyone, including students, for coming and sharing their opinions. “If any of the students here question if they can be absent on a holiday, it is not considered an absence in terms of attendance,” she said. “You are free to stay home on your religious observances.”

Students are excused from school for religious reasons, but part of their concern is making up schoolwork or tests missed due to religious days.

Another concern is would having students missing school cause a waste of educational resources with schools open and would the district find a secular purpose to close? It is an issue that Muslim parents, and others in favor of the holiday addition, have considered, and will discuss again if Eid is to land on a school day.

“Absenteeism on Eid, which could be upwards of 150 to 200-plus students, is still seen as negligible numbers for the board,” said district parent Sahar Hussain. “Though we proposed to eliminate absences and wasting resources altogether by using superintendents conference days, that suggestion was disregarded.”