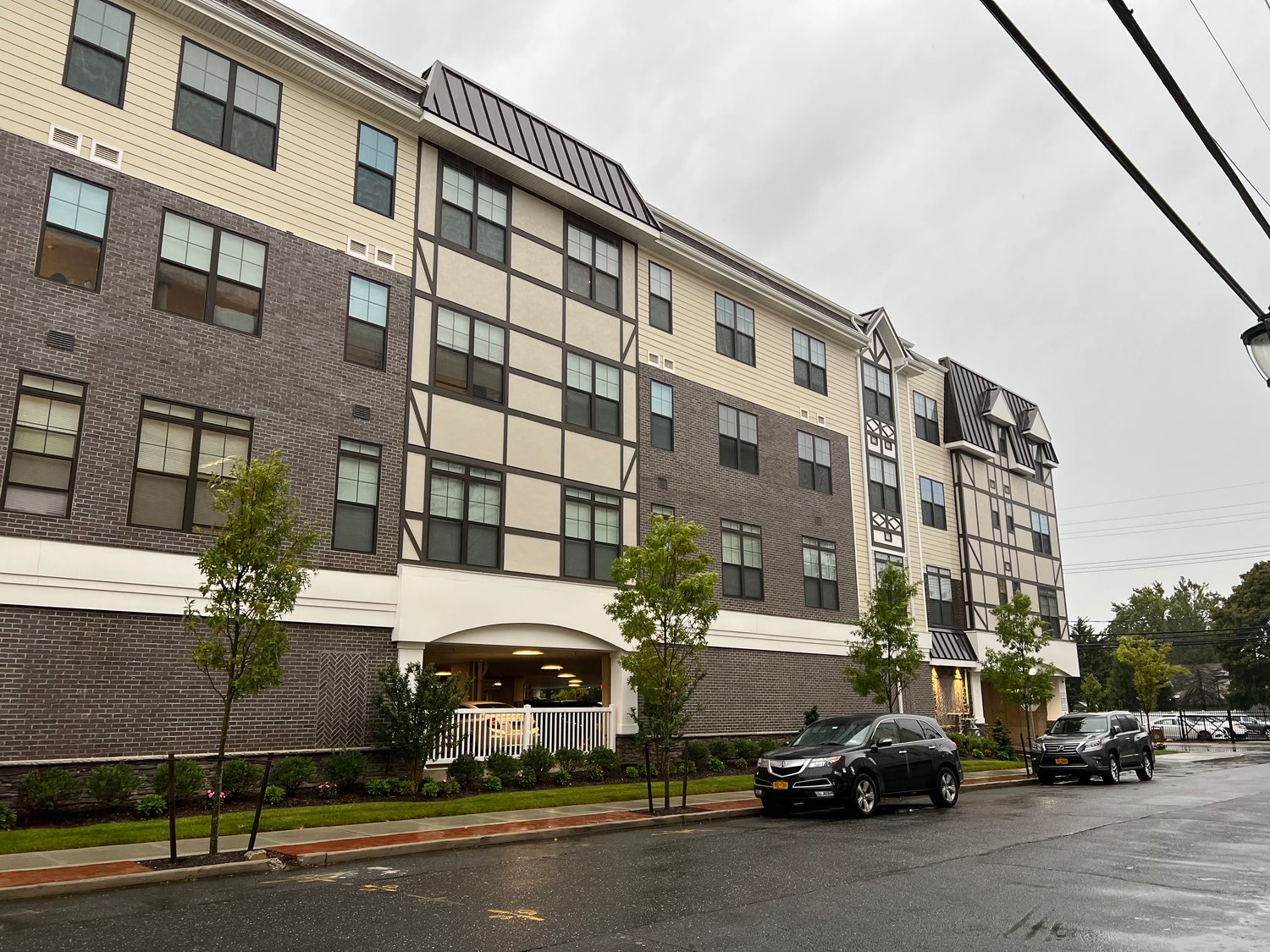 The Cornerstone at Yorkshire, at 5 Freer St. in Lynbrook, was recently sold to the Birch Group for $42.85 million.
Ben Fiebert/Herald
By Daniel Offner

The Cornerstone at Yorkshire, a recently constructed 80-unit residential apartment complex at 5 Freer St. in Lynbrook, was recently sold to the Birch Group, a development firm from New Jersey.

According to Long Island Business News, the property, which once housed the former Capri Lynbrook Motor Inn, was sold for $42.85 million by the Farmingdale-based developers Terwilliger and Bartone. It was at 98 percent occupancy at the time of the sale.

The Capri has a checkered past of prostitution and drugs. It was a nuisance for several years — on which the village expended much time and energy in the hopes of revoking its license.

Mayor Alan Beach had previously referred to the property as a “magnet for undesirable activity,” and helped champion the redevelopment in hopes that it would revitalize the area and help bolster local commerce.

News of the sale is particularly surprising considering that the Terwillinger and Bartone Properties group tried for years to build an apartment complex in Lynbrook.

When the project was finally approved in 2020, the Nassau County Industrial Development Agency granted mortgage-recording tax abatement, sales tax abatement, and a 20-year payment in lieu of taxes agreement for the four-story residential property.

The Department of Housing and Urban Development requires that eight of the units be set aside as designated workforce housing, which requires that they be leased at a reduced rent for households earning up to 80 percent of the median income for the area..

Because of the Capri’s history of criminal behavior, the Village of Lynbrook issued a request for proposals to redevelop the property in 2016.

Developer Anthony Bartone, with Terwillinger and Bartone of Farmingdale, won the bid for the redevelopment project and after several years of discussions with the village board, the construction of the Cornerstone began in June 2020.

“We said we’d deliver this building in 18 months,” Bartone told the Herald back in January 2022 during a ribbon cutting ceremony for the new location. “Through Covid, through supply chains and everything, guess what? We opened in 18, and I’m very proud of that.”

While the property has changed hands, according to published reports, the current Greystar management staff is expected to remain in place under the new ownership.

“The Birch Group is a privately-held commercial real estate investor, owner and operator with a singular ability to uncover opportunity and create enduring value for partners, tenants and investors,” the company’s website states. “Since 2014, we have deliberately expanded our portfolio of income-generating properties to include more than 6.5 million square feet of value-add office assets in strategic markets that demonstrate sound fundamentals and growth potential.”

In addition to the Cornerstone at Yorkshire, the company has acquired several Long Island-based commercial properties in recent years.

This includes the Jericho Plaza Conference Hub, a two-building office complex and campus, and both 1979 and 1985 Marcus Avenue in Lake Success, both of which boast more than 300,000 square-feet of office space and include an on-site café, fitness center and parking.

“We have signed several tenants in the pandemic that have come out of New York City,” Mark Meisner, the president and founder of the Birch Group told Bloomberg in an interview in January. “Employers have to continue to remain flexible and give their employees the optionality of working closer to home certain days of the week.”

The Cornerstone Yorkshire in Lynbrook is currently the only residential property purchased by the company, however, their website indicates that they have sold plans for residential space in Baltimore, Hartford, and Philadelphia.

Lynbrook Mayor Alan Beach was contacted but said he is withholding comment until he gets a chance to meet with the new developers.

Several attempts to reach representatives with The Birch Group and the initial developers, Terwillinger and Bartone, were not returned as of press time on Tuesday.