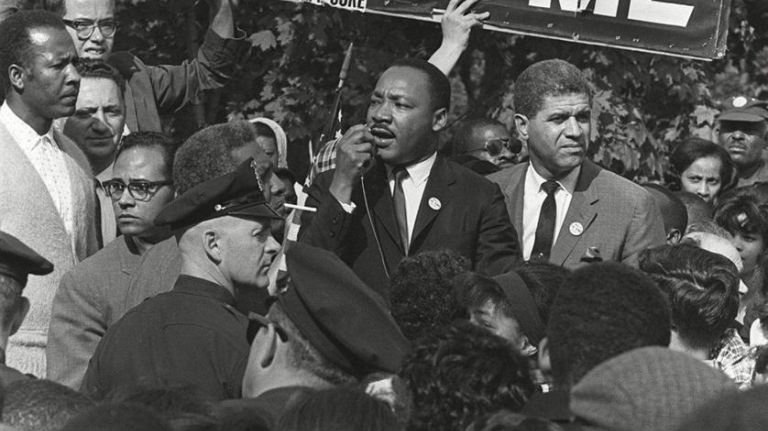 During a visit to Long Island during the 1960s, Martin Luther King Jr. led a protest to desegregate schools in the Malverne School District.
Courtesy Newsday
By Robert Traverso

In 1965, Malverne became the focal point of the fight against racial segregation in schools nationwide. That was the year Martin Luther King Jr. successfully led protests at Malverne High School that paved the way for desegregation of Malverne schools.
Long Island Traditions, a local organization that works to “recognize and pay tribute to Long Island’s diverse ethnic cultures,” announced the launch of its “Civil Rights Backstory Tour,” a series of self-guided cell-phone tours that will detail historical and modern sites of cultural significance across Long Island.
Each virtual tour stop will feature historic and modern photographs, and each piece will last five to 10 minutes. The project will feature first-person narratives from residents of the documented communities, as well as narrated pieces that will detail the history of Black communities. “The narratives describe how these communities continue to pursue and engage in the economic and social opportunities necessary to establish vibrant neighborhoods and a quality education for its children,” the statement said.
“Long Island Traditions’ ‘Civil Rights Backstory Tour’ will explore the history of the African-American experience in Nassau and Suffolk counties, documenting the shared struggles and the resilience of the people and their communities from the Colonial period to the present day,” the statement said.
“Through field interviews and oral histories, we seek to break down the barriers that divide us, so that we can share in the power and excellence of our family traditions,” the group’s website states.


King’s protest at Malverne High is one event and site that project will document. Long Island Traditions works alongside local scholars, historical societies, church organizations and other groups to gather information about the history of the area and experiences of residents.
“Long Island Traditions is dedicated to documenting, presenting and preserving these stories and cultural traditions, based on oral histories and cultural ethnographic research,” said Executive Director of Long Island Traditions Nancy Solomon in the statement. “By integrating multimedia resources with newer technologies, visitors to historic sites will gain a more accessible way to understand vernacular and historic sites recognized within African-American communities.”
For more information about Long Island Traditions, visit longislandtraditions.org
Report an inappropriate comment