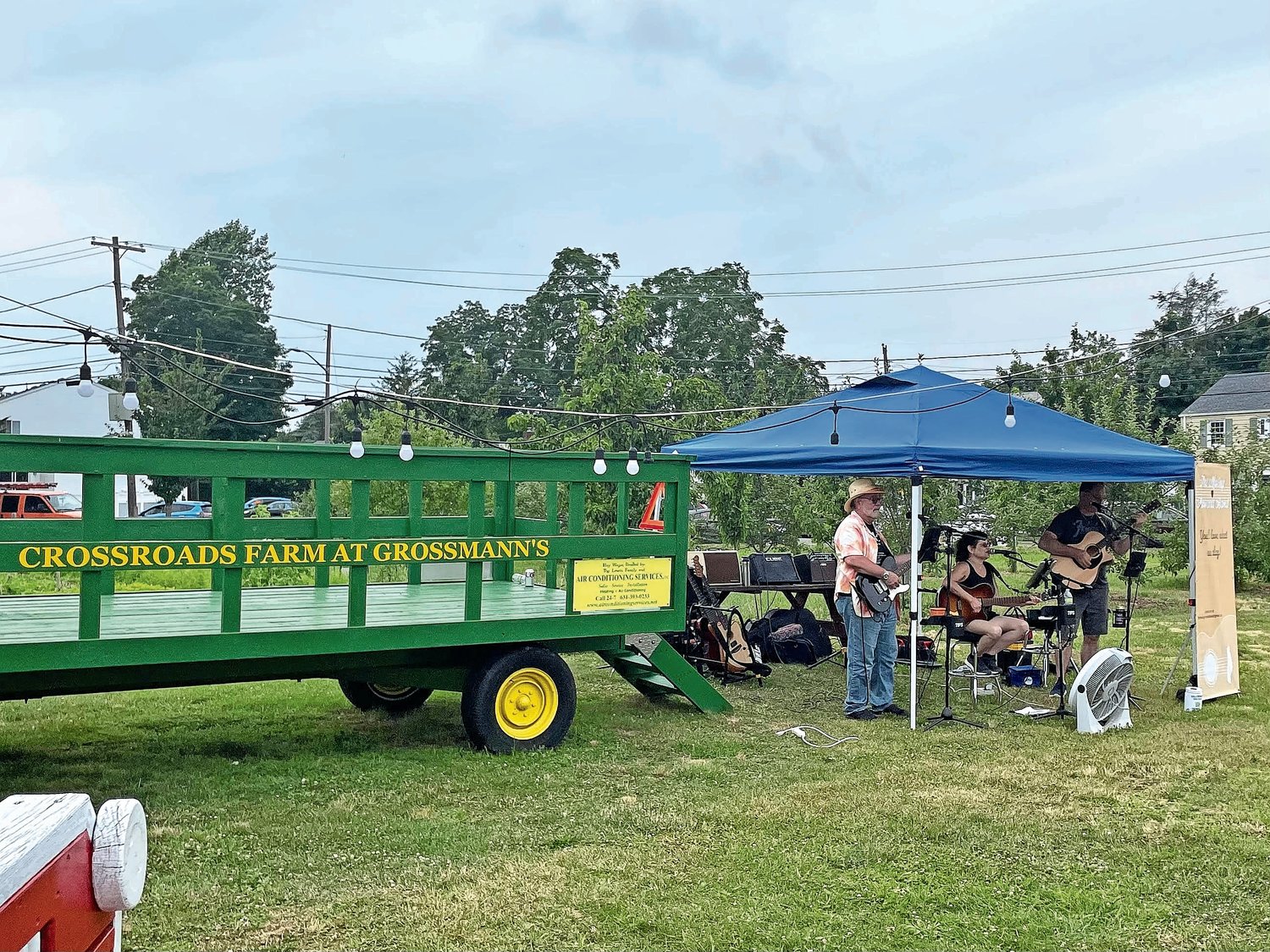 Visitors to Crossroads Farm could sample a wide array of vegan offering on Sunday while listening to live music performed by Moving Forward.
Kyle Chin/Herald Photos 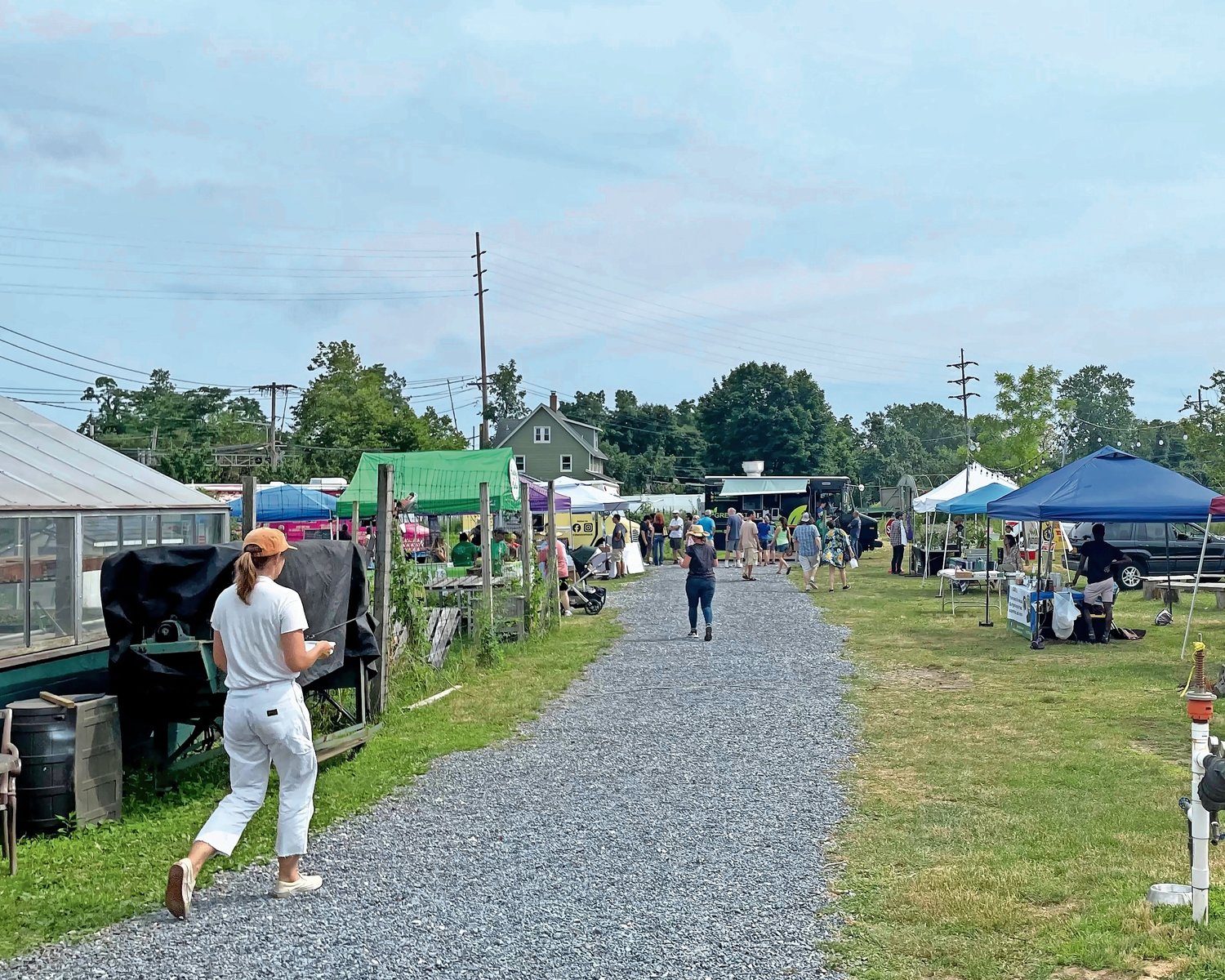 Local businesses, food trucks, and animal advocacy organizations gathered at Crossroads Farm on Sunday for a vegan festival. The farm was abuzz with vendors bringing a cornucopia of vegetarian and vegan offerings for visitors to enjoy.

Matt Korsky, the co-owner and proprietor of Green Street Eatery in Levittown led the planning of the festival, along with Annie Sunshine, the lead organizer for farm events. “Annie and I co-organized it,” said Korsky. “We’d been talking about it for about a year. We were going to do it last year, but we had just opened out storefront last year. So we were really way too in the deep trying to figure how to open up a storefront and the food truck at the same time.”

Korsky and his wife Lauren brought out the Green Street Food Truck to the event, serving fresh animal-free food and drinks. “We just wanted to support and show that there’s a thriving vegan community. There are all these amazing vegan businesses, or businesses that offer vegan option and products. We wanted to give them an opportunity to showcase themselves, make some money, and get their name out there,” he said.

One vendor, Vmartdiscout, produces natural herbal teas, and was represented at the festival by Nemahun Vincent. “We have a family run operation.” she stated. “We sell herbal teas. Our parents started this in 2014. It was incorporated.”

The Vincents heard of the fesitival through their participation in farms markets. “Just within the past couple of months we’ve been doing the farmers market circuit. So we do several markets throughout the week. Our mother is actually here at this market on Saturdays, and that’s how she found out about today’s event. “

“We got to talk to people which is nice, and get our product and name out there, so that was awesome,” said Vincent. “Just seeing all the vendors and people enjoying themselves on this beautiful day was really nice. Better way of spending our Sunday than sitting inside.”

Those perusing from stand to stand also enjoyed live music from the Moving Forward Band. Musician Debra Lynne explained the band’s relationship with the farm. “We’ve played here many times before. I’m also an organic food person and a vegetarian,” she said. “We like playing outdoors. We like playing at the farm. They’re very friendly people. It’s a very appreciative audience.”

Mixed with the food and fun was a strong sense of animal advocacy. At one table was John Di Leonardo, the executive of Humane Long Island, an animal advocacy and rescue group. “We’re very glad to be at Malverne’s first vegan festival,” he said. “We’re here today educating people about how easy it is to save 200 animals by simply leaving them off your plate.”

Di Leonardo explained the origins of Humane Long Island. “We were founded in Malverne in 2012 originally as a circus protesting organization,” he said. “We actually eliminated all the animal circuses on Long Island, and then went after all the wild animal acts and all the fairs on long island. Eliminated those as well.”

The group has developed something of a specialty for rescuing birds. “We found during the same period of time people were abandoning ducks and chickens and other animals after Easter, after school hatching projects. So we started rescuing them, because these are domestic animals that can’t survive in the wild,” explained Di Leonardo.

Another group looking to open a larger animal refuge on Long Island is Bright Light Animal Sanctuary. The organization’s founder Dana Giugliano was on hand to explain. “We’re a brand new 501(c)(3) non-profit and our goal is to open up an animal sanctuary and education center on Long Island,” she said. “We feel this is needed here.”

“We’re looking for land in the Riverhead area. We’re starting to fundraise,” Giugliano explained. “We’re going to work with rescue groups to take in farm animals. So it will be a forever home for farm animals but we also want to build an education center so we can teach about all animals.”

From egg and dairy-free pastries, to fruit smoothies, to herbal teas, and to heartier vegan meals, the vegan fest showed the diverse array of options available free of animal products. All the while, farm goers were reminded of the importance of animal rights.

Crossroads Farms hosts a farmer’s market every Saturday from 9 a.m. to 1 p.m., where a number of the vendors at the Vegan Festival regularly attend, though not necessarily selling exclusively vegan products.