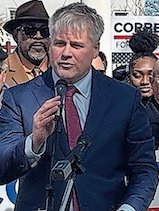 A Malverne village trustee has asked Village Attorney Kevin Walsh to investigate a media advisory issued by Mayor Keith Corbett, claiming the advisory has placed the concerns of the mayor’s congressional campaign over that of the village.

The media advisory, dated April 28, announced a news conference at the Belmont Park Long Island Rail Road station, where Corbett, a Democrat, planned to call on the federal government to curtail funding to the state until bail reform laws are changed.

The news conference was eventually canceled.

“Mayor Corbett will stand right across the border from Queens to demand action before New York City’s out of control violence and carnage spreads further,” the advisory read. “Crime is on the rise in New York City and if the bail reform laws are not changed, it will infiltrate Nassau County and harm our suburban community.”

The media advisory listed Corbett’s campaign email address but was on village letterhead, which is what concerned Malverne Trustee Patricia Fitzpatrick, who is running as a Republican candidate for State Senate.

Corbett defended his actions, saying that as mayor he had every right to stand up to protect his village.

“I am the mayor of one of the safest villages in New York state because we fund the police, and I believe the bail reform laws need further modification to keep all residents safe,” Corbett said. “The number one priority of government is public safety, and I will continue to speak out to ensure we remain safe. We are less than three and a half miles from where significant violent crimes have occurred, and I will continue to use my role as mayor to ensure our residents remain safe.”

Although, the investigation is still ongoing, Walsh said he agreed.

“The mayor in a village is the executive branch of the government of the village,” Walsh said. “That part of the government will generally speak out on issues that are broad-based that will potentially impact the residents of the village, so in the context of him speaking out and taking a stand on certain issues that he thinks that are in the interest off the residents, that happens all the time and is within the rights of the job of mayor.”

Fitzpatrick said that even though she agreed with the mayor on the issue, it is not the role of a village mayor to tell the federal government what to do, and that cutting off federal funding to the village would negatively affect village projects.

“If he becomes a congressman, he has every right to do that,” Fitzpatrick said, “but as a mayor, I don’t think it’s fair to jeopardize the other communities of the state, including Malverne, by saying, ‘We don’t want your federal funds until you fix this.’ We get federal funding through New York state, and we are in the process of working on a storm-water management project, and are receiving about $7 million in federal funds. If this media advisory is successful, it’s telling the federal government to stop giving money to New York state, and I think that hurts the residents of Malverne.

“I don’t see how this was supposed to be village business,” she added. “I think it was campaign motivated. In fact, none of our trustees were even informed he was doing this.”

Corbett denied that the project relies on federal dollars.

“We do not rely on federal funds to manage our budget,” he said. “You would think, as a former budget director, the trustee would know that, but then again, that shows she never actually prepared our budgets. Stopping federal funds would not hurt Malverne.”

Corbett said that Fitzpatrick never contacted him to voice her concern. “I’m surprised she wouldn’t call me up and say she had an issue,” he said. “She hasn’t spoken to me or mentioned anything.”

Corbett defended his advisory by saying, “I’m a mayor of a local village not far from the Queens border, and I’m nervous about what could potentially happen with bail reform. I did a press conference about it, and unfortunately we canceled the press conference for other reasons, but I don’t really see where the story is.”

He said he believed Fitzpatrick’s comments were politically motivated. “She’s trying to be a political pawn for her party because she’s running for State Senate,” Corbett said. “She runs around with [Hempstead Town Councilman Anthony] D’Esposito, who’s running against me in the general [election], and this is nothing more [than] political partisanship and is trying to create something out of thin air.”

Fitzpatrick now awaits Walsh’s response after he meets with the village board at its architectural design review meeting on May 18.

“I have asked the village attorney to investigate what happened to determine if there was inappropriate conduct, and make a recommendation to the board about what, if anything, should be done,” Fitzpatrick said. “It’s not up to me to decide what harm has been done; I’m asking him because he knows the municipality laws and ethical rules better than I would.”

Walsh said, “At that time, we should know whether they’re going to take some action or if they think its nothing and they’ll and give an explanation of everything and air it all out that night. Whether or not that leads to further follow up remains to be seen.”