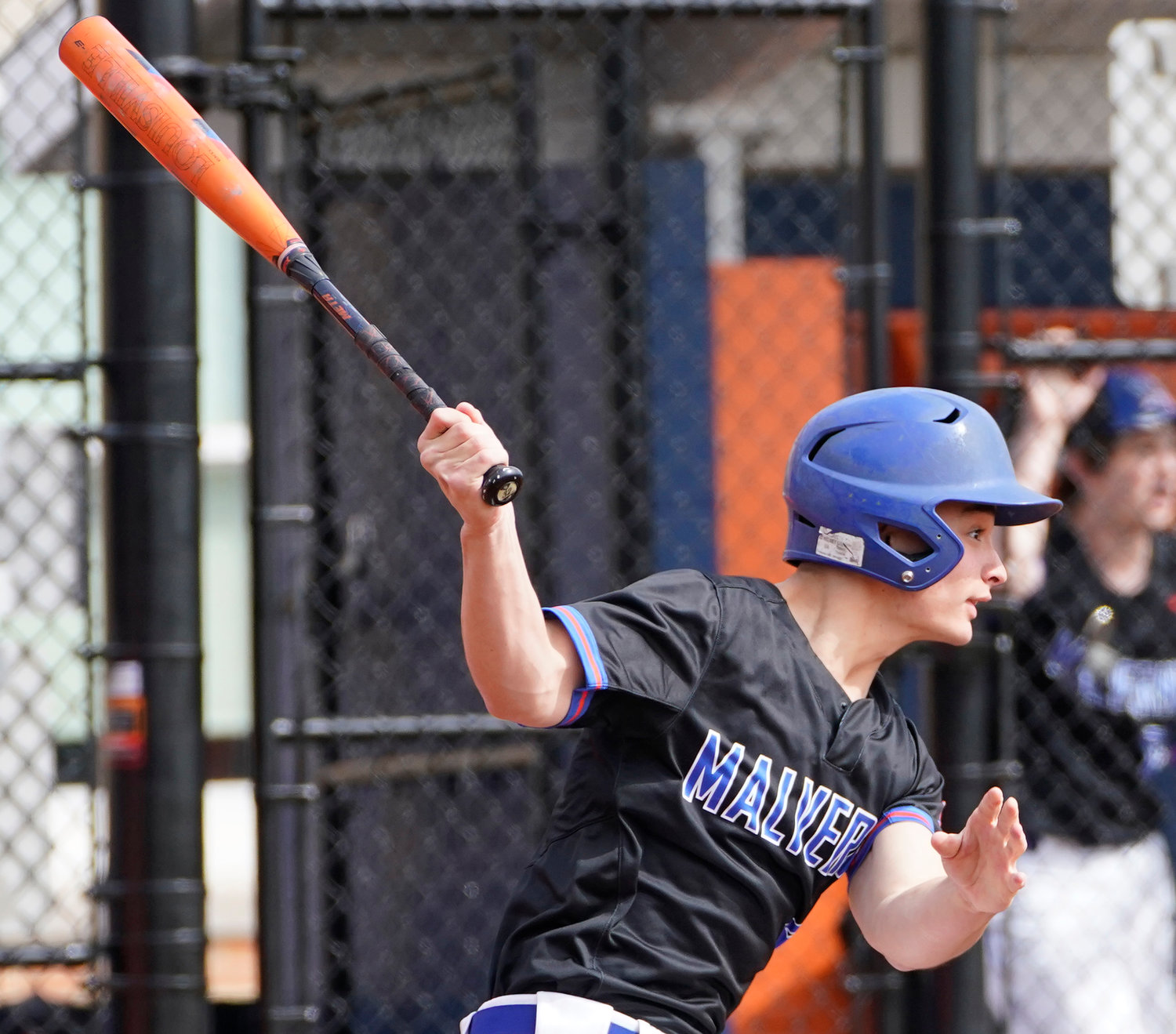 Spurred by an eye-opening early league loss, the Malverne baseball team, as reigning Nassau Countywide Conference 2 champion, kicked off an almost monthlong winning streak.
The Mules, however, weren’t the only team on a roll this spring in Countywide 1, as rival Jericho had reeled off its own nine-win skein through April. Though impossible to know at the time, when the conference titans first clashed May 4, the host Jayhawks would come within one inning of dashing Malverne’s hopes at making history.
Instead, the Mules’ 4-3 seventh-inning comeback win proved decisive in securing Malverne – which finished 13-3 in league – a half-share of the Countywide 1 title, giving the school its first back-to-back baseball championships this century. The Jayhawks, who went on to take two of three in the teams’ series, are the conference co-champions.
A 15-4 loss to Valley Stream South on April 18 was the jolt that kickstarted Malverne’s surge, sparking an immediate retort from the Mules of five straight 10-run wins – the first two against VSS – and a 9-2 run to close the season.
“The [VSS] loss was a turning point,” said ninth-year Malverne coach Joe Dunn – whose program, before last season, had last won a conference title in 1991. “The guys looked around afterward and said, ‘What are we doing?’ From then on, we focused on just putting the ball in play. When you do that, good things can happen.”


Added Dunn: “We always knew we’d have the pitching to back us up.”
Named one of Long Island’s Top 100 Baseball Players for 2022 by Newsday, Malverne ace Matt Merkel encountered no jinx in second season as the Mules’ top starter. The junior southpaw – who went 5-0 on the hill as a sophomore – finished 6-1 with 60 strikeouts and a 2.08 earned run average. The two-time All-League selection also paced the Mules at the plate, batting a club-high .467 with a team-leading .600 slugging percentage.
“Matt Merkel’s a phenomenal pitcher, always around the zone, great changeup,” said Dunn. “And he’s an absolute terror as a lefthanded hitter.”
Malverne seniors Daniel Quaranto and Matt McKeon joined Merkel on the All-League roster. Quaranto, a lefthanded hitting third baseman, was second on the club batting .444 and led the Mules with 20 stolen bases. McKeon, a corner infielder/relief pitcher, hit .426 and slugged a Merkelesque .596, while picking up three wins out of the bullpen.
Mules former infielder Parker Mercado (.436 avg.) “found his natural position,” said Dunn, in his first full season at catcher, while fellow senior Steven Daly (.408) looked equally at home in his first year joining Malverne’s rotation, going 2-0 as a starter with a 1.66 ERA.
Junior Yadier Tavarez (.371) went 2-1 as Malverne’s No. 2 starter, while switch-hitting senior outfielder Keondre Greene batted .360 for the repeat champions.
“These guys earned it,” Dunn said. “We started out just hoping to do well in the first half. When we finally saw that it was us and Jericho, the guys said, ‘Let’s get this done.’”
He added: “So they shortened up their swings, got some base hits. And got it done.”