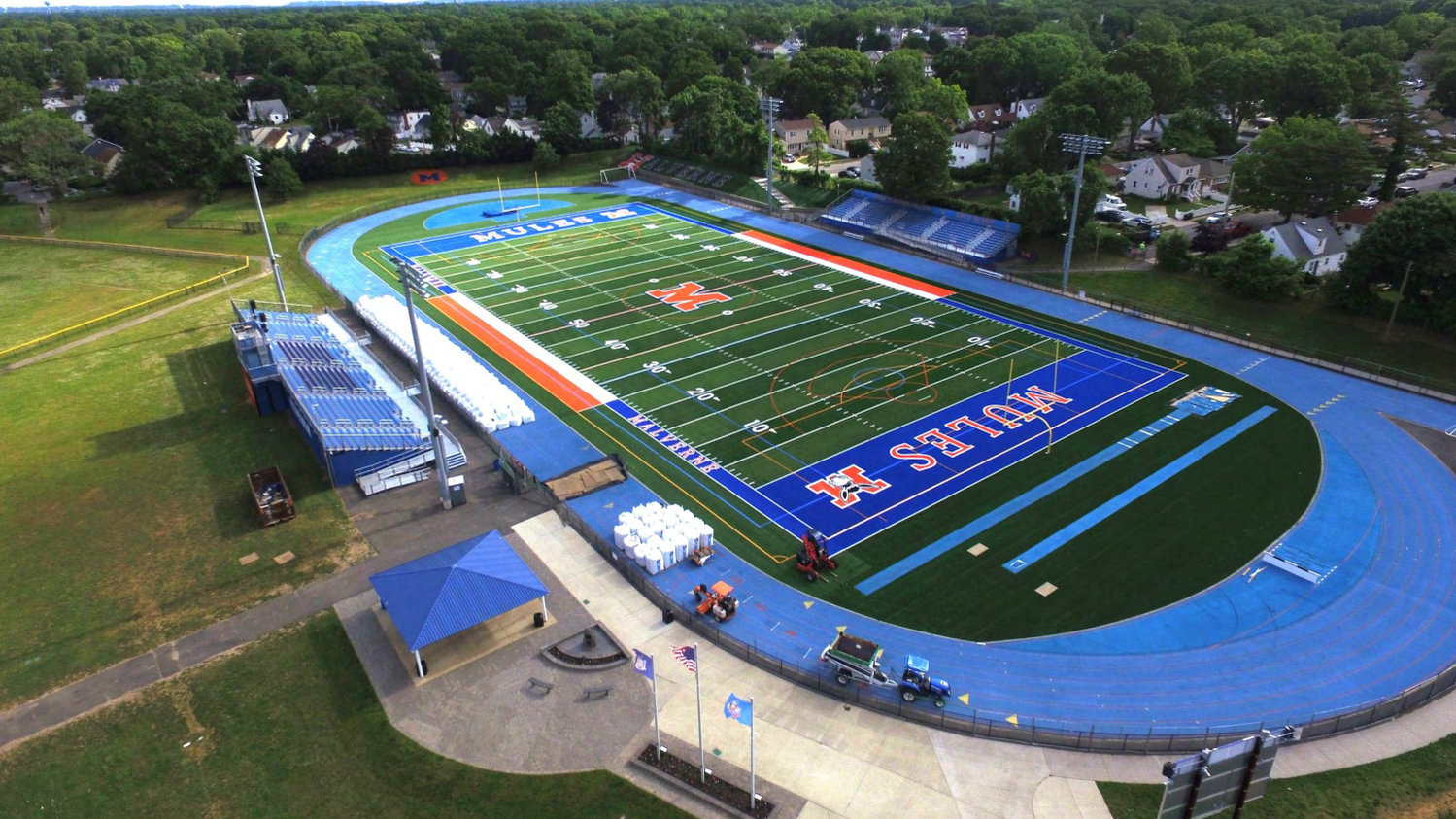 Overhauls to the Malverne Senior High School football field were carried out in May and early June in preparation of the school’s graduation ceremony. Renovations to the track did not begin until late May, and should be completed some time this month.
Courtesy Malverne School District 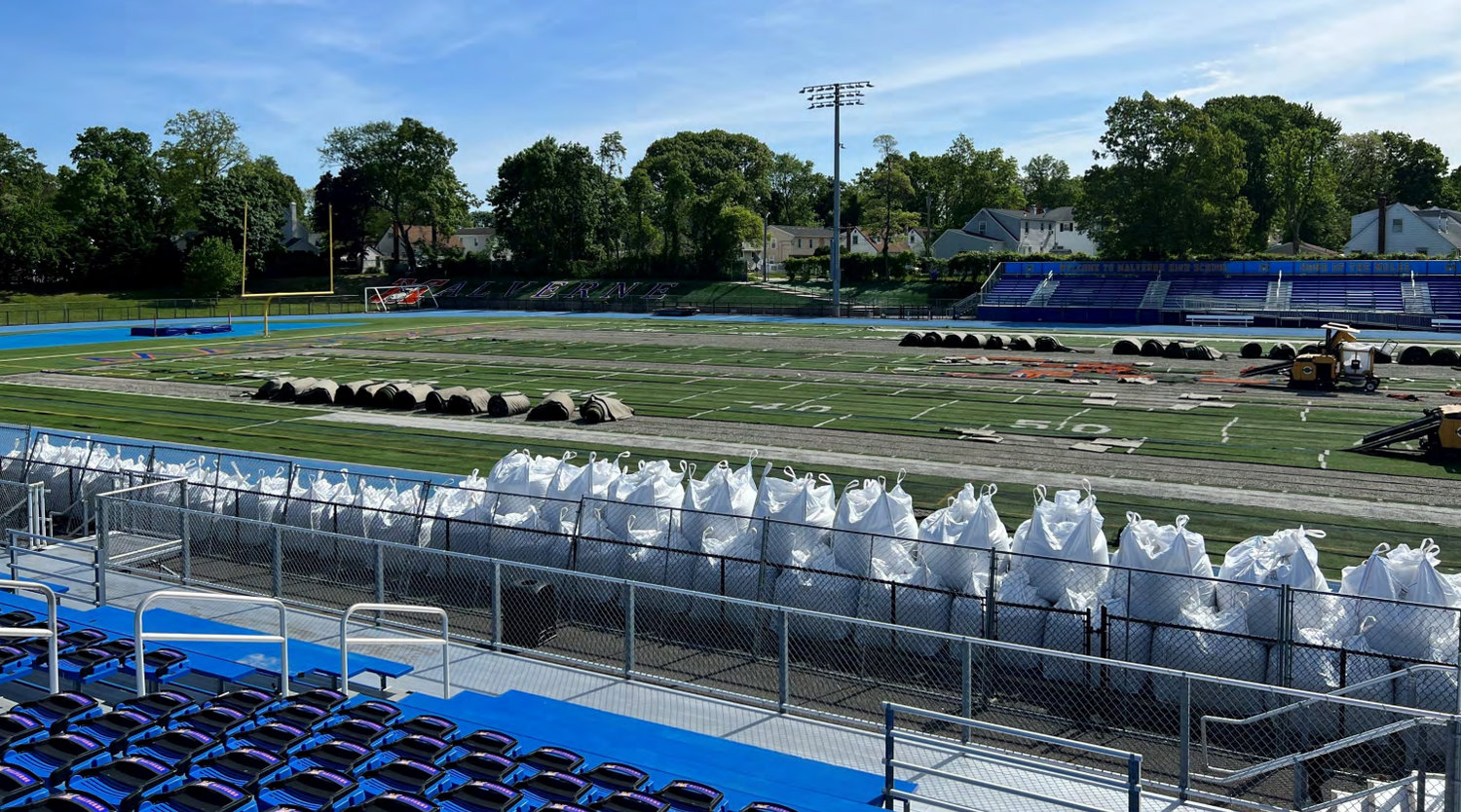 Malverne’s old turf field was stripped away and completely replaced as part of phase one of track and field renovations in May.
Courtesy Malverne School District
Previous Next
By Kyle Chin

Final renovations to the Malverne Senior High School track carried out over the summer have been delayed, according to the Malverne Board of Education, with work expected to finish before Malverne’s homecoming celebrations on September 24.

As the capital reserves were monies already held by the district, the expenditures required no additional costs from taxpayers, although the district did need affirmative approval from voters to utilize the funds. Such approval was granted when the district’s proposed budget passed on May 17.

Phase one of the track and field renovations consisted of replacement of the turf on Malverne High School’s football field. That work was carried out in May, in the weeks preceding graduation. Vibrant blue and orange borders replaced the formerly worn and drab outlines on the field. In June, graduates walked out onto a brand new field to receive their diplomas.

Phase two of the renovations began on June 27, with workers tearing out and replacing the asphalt base layer beneath the track. That work was tentatively set to be finished by August 8, but has since been delayed.

The project delay was addressed at the Malverne School Ditrict’s monthly meeting on the evening of August 30. “I know that there were some questions from the community on the delay in getting the track ready,” said Superintendent Lorna Lewis.

Assistant administrator for Business Dan Balzan explained the timeline for the renovation’s final steps. “The terf itself is complete. We actually were able to complete that just before graduation. The senior class got to celebrate out there. However the track was a bit delayed,” he stated.

“At this moment the delay was due to the paint itself. So the track that’s out there currently is the new track. It is black. We are not keeping the black track. We’re going to be painting that navy blue. That’s going to require two working days. The paint’s set to arrive September 7, two days after Labor Day. We’re trying to accomplish that the following weekend, between the September 10 and 11,” he said.

“Once that’s painted, it requires one day of lining, which is a one day process. So there’s three more working days. So we just ask that you bear with us these next couple weeks until we can finish up this track.”

While the field is still open to for school programs, public use will be delayed until the work is finished. “While the turf is useable, we have been using that, but we’re going to hold off on opening up to the rest of the community until we finish the painting and the lining of it. We are anticipating to have this all complete before homecoming,” said Balzan.

In addition to the track renovations, the roof of the Malverne Senior High School gymnasium was renovated, and the school’s baseball field was redone in preparation of the opening of the season.

Other items set to be completed using the $2.6 million include upgrades to the Davidson School and Maurice W. Downing School gymnasiums, the purchase of two additional buses, one large and one small, and renovations to Maurice W. Downing’s Bathrooms.

The replacement of windows and doors at Maurice W. Downing School and Malverne High School has also been underway, in part to combat the potential for gun violence threats, according to Superintendent Lewis.

A capital outlay of $75,000 is also slated for use in resurfacing the Malverne High School parking lot, work set to be completed during the coming school year.