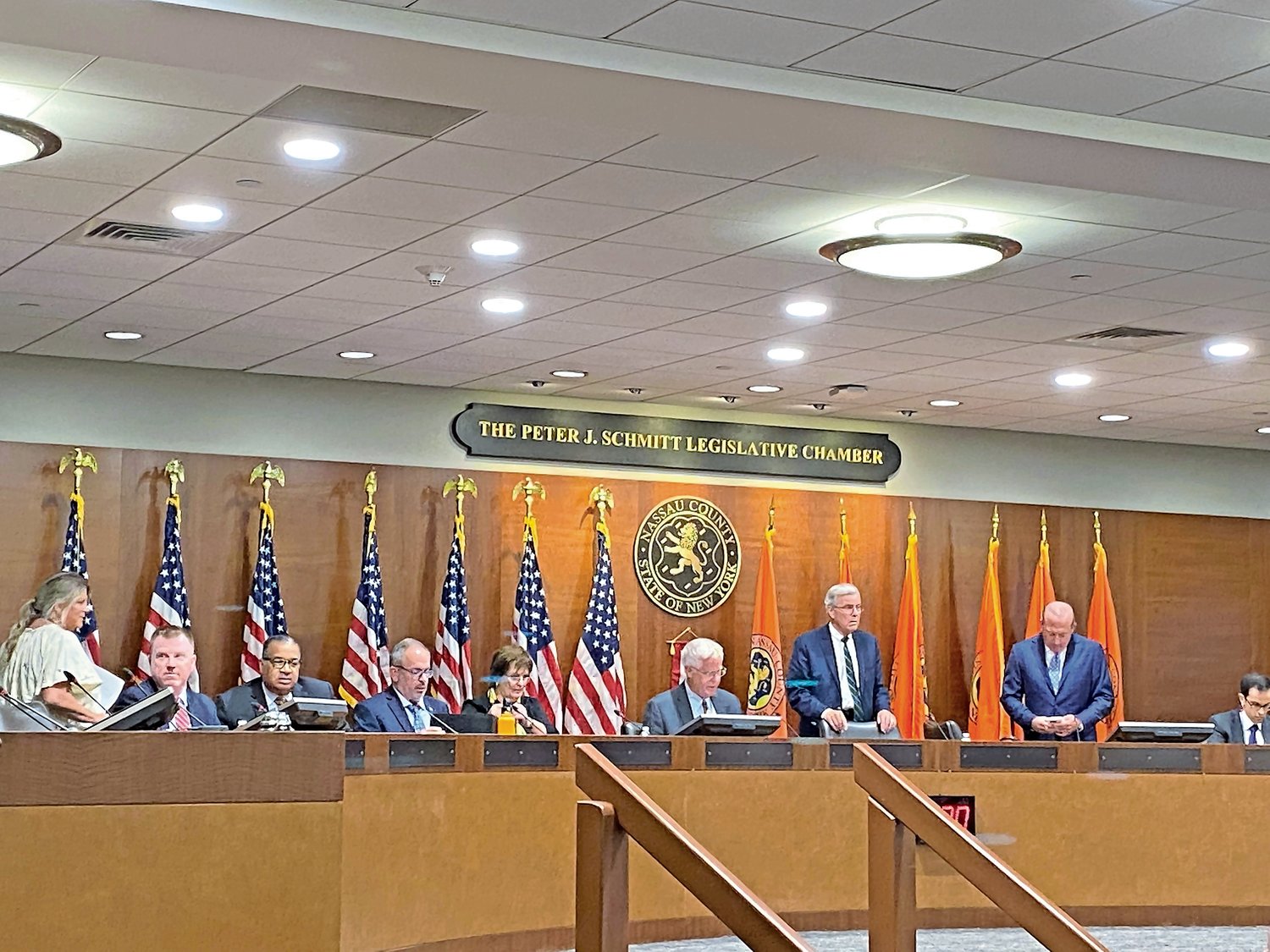 Nassau County’s Temporary Districting Advisory Commission meets every 10 years after a census to consider redrawing county legislative lines. This time around, some of the people who live in those existing districts are asking for more diversity and inclusion.
Andre Silva/Herald 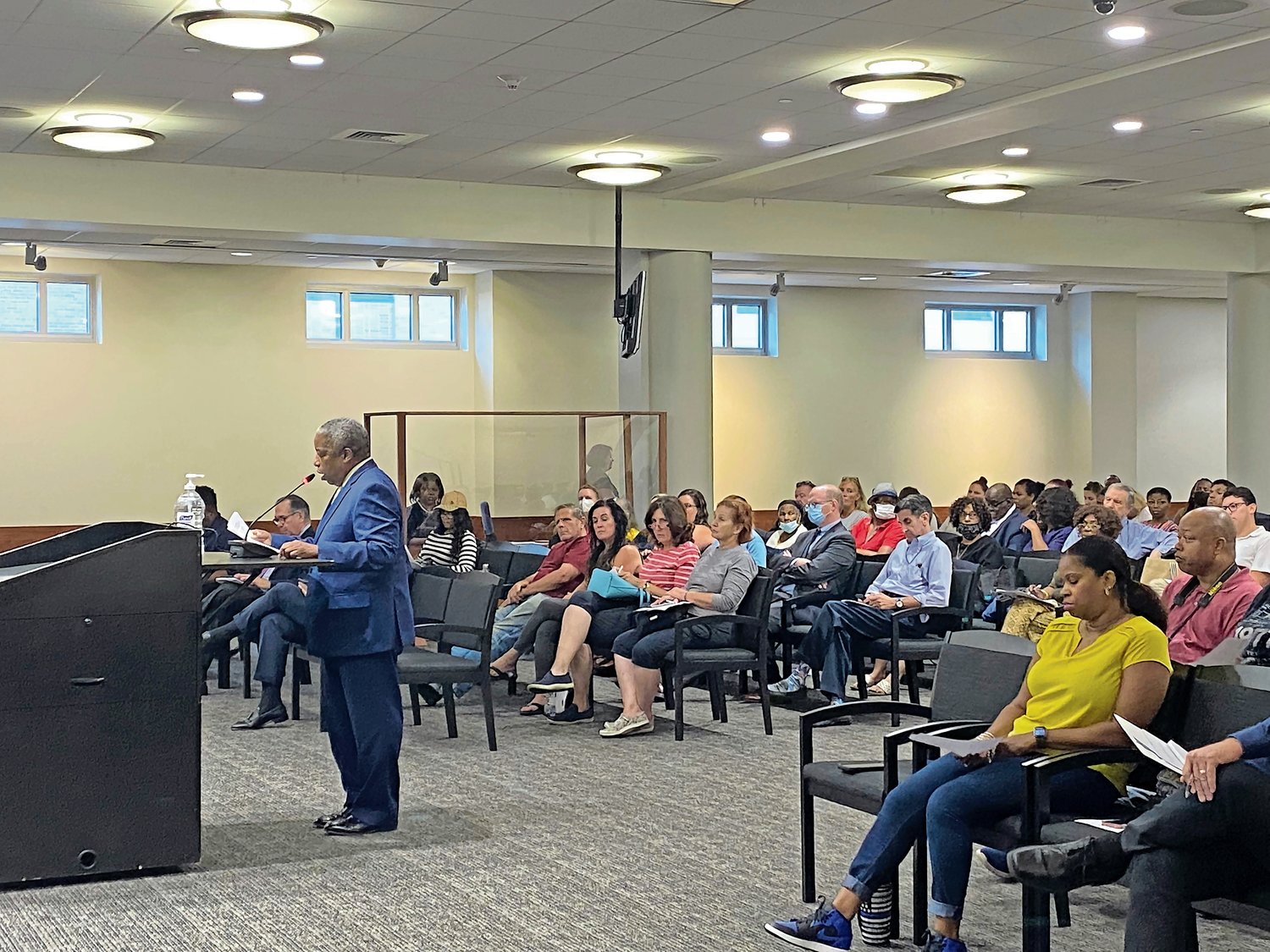 Timothy Rodgers, who has lived in Hempstead village for 30 years, said the effects of gerrymandering and redistricting over the years have left communities like his — particularly communities of color — in a ‘state of decay.’
Andre Silva/Herald
Previous Next
Stalemate in the commission

Before public testimonials began in front of the Nassau County redistricting committee this past week, Democratic appointee David Mejias challenged the motivations of his Republican counterparts, saying they intentionally stonewalling the process to redistrict county legislature seats. That way, GOPers could have free reign to adopt what he described as an unlawful map in November. where it would be nearly impossible for anyone to effectively challenge the map under federal law.

Mejias went as far as saying he and other Democratic appointees in the minority scrounged a list of potential locations and dates to hold possible hearings, with no answer or response from Republicans in agreeing to the dates. Furthermore, at the committee’s current pace, the hearing to approve the map by both delegations would even happen until Nov. 10 at 5 p.m.

That would leave the public just one hour to view a map that could potentially rule the county for the next 10 years, Mejias added.

Peter Bee, who leads the majority contingent on the redistricting committee, said he was disappointed Mejias would start the hearing with a partisan attack on the good faith and integrity of the Republican members of the committee. Bee said he appreciated the minority delegation’s efforts in finding locations and times where the committee can convene and listen to the public, and that in the meantime, the commission should focus less on attacking each others’ motivations, and more on what they were charged by law to do.

It’s a unique opportunity to reshape town lines and political power within Nassau County — an occasion that comes just once every decade.

When people in Nassau County got together back in 2012, they worked to decide how each of their communities would be represented on the county legislature.

But in the first hearing of the 2020s held last week, many came together at the Theodore Roosevelt Legislative Building in Mineola to voice their disdain for the process.

Noah Burroughs, a Hempstead village trustee, said he was not given enough time or notice for this particular.

“It seems like it was done purposefully,” Burroughs said. “The day before kids are back in school in some districts, obviously this doesn’t allow some parents with children to get here. However, you can see this is still well attended.”

Some 100 people attended the meeting to discuss how the latest U.S. Census numbers affected how residents would be represented at the county level. Among those in the audience was another

Hempstead village resident, Daniel Oppenheimer, who said he believes the county needs to be more transparent with their map creation process as well as the data they’re using to create new district maps.

He said he doubts officials will share enough data to paint the full picture of the segregation, separation and inequality throughout Nassau County.

“We need publicly available data, posted clearly, and actually research the raw data,” Oppenheimer said. “Not just the secondhand or thirdhand data after the scientists go through it. We need to see the data they are using to make these maps to have an educated opinion.”

But it would be hard to take diversity and representation into account if that diversity doesn’t exist on the redistricting committee itself, Valley Stream’s Cristina Arroyo Rodriguez said.
To emphasize that point, the former Herald reporter approached the podium and began her remarks in Spanish.

“The Catch-22 we are in is cyclical,” Arroyo Rodriguez said. “The appointment of the members on this commission was not random. Those in power picked them. Unfortunately, those in power have proven themselves to be uninterested in proper representation and true equity.

“Creating a fair district map is the first step in remedying equitable representation. And gerrymandering is the first barrier.”
The infamous art of “cracking” and “packing,” to create districts that favor specific candidates or political leanings is something

Arroyo Rodriguez and others spole out against. They don’t like the way they believe officials can cut up and divide communities within a district to manipulate the electorate to their favor.

Timothy Rodgers, who has lived 30 years in Nassau, said the effects of gerrymandering and redistricting have left communities — particularly communities of color — in a state of decay. Since the previous redistricting a decade ago, he’s noticed a systemic disparity and a misrepresentation of resources in these communities.

“With a blindfold on, you can start driving from Garden City, and you’ll know when you get to Hempstead or Rockville Centre,” he said.

Rodgers said he loves his community dearly, and was motivated to come attend the hearing to speak on behalf of his neighbors. Like other members of the public, he hopes this year’s redistricting takes testimonies like his and others into consideration to create an equitable and fair map for the entire county.

The committee — known officially as the Temporary Districting Advisory Commission — is tasked to have its new district lines finalized by Nov. 7.

For school district, third time’s the charm for the bond