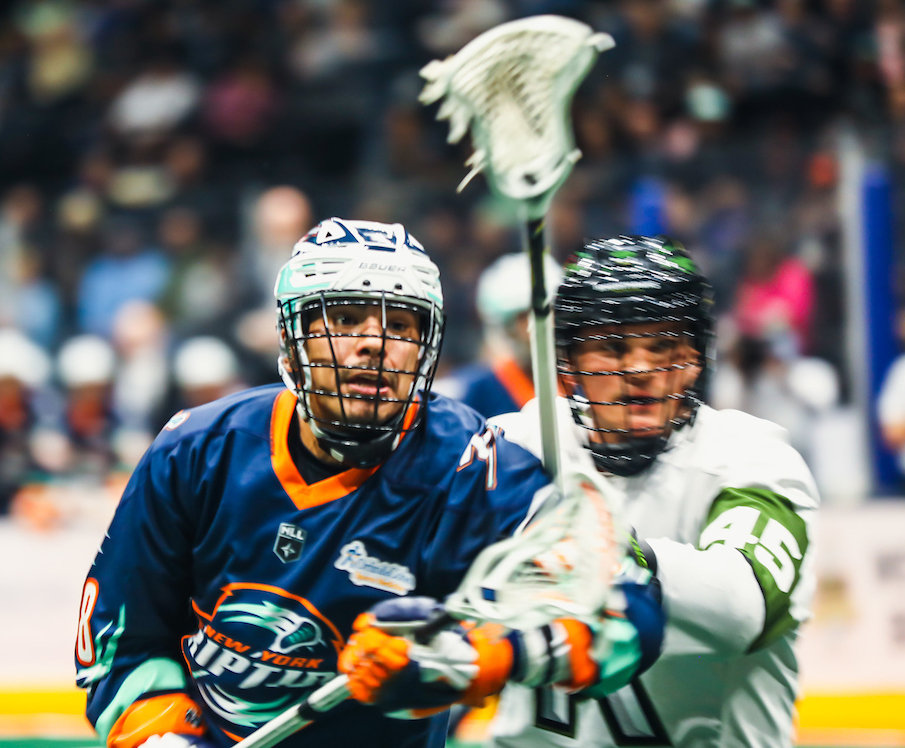 Playing its first game in 637 days and with an infusion of new talent, the New York Riptide opened the 2021-22 National Lacrosse League (NLL) campaign Saturday night with a 13-12 overtime loss to Rochester before a spirited crowd at Nassau Coliseum.

Thomas Hoggarth netted the winner 1:30 into OT for the Knighthawks, who trailed just once all night when Riptide highly touted rookie Jeff Teat scored his first career goal at the 4:32 mark.

“The fact we got it to overtime is pretty character and gritty stuff,” Riptide head coach Dan Ladouceur, a five-time NLL champion, said after the game. “The crowd support was amazing,” he added. “The guys loved to be able to play in front of Long Island fans.”

The game featured six deadlocks, the last courtesy of New York’s Connor Kearnan. He converted an over-the-shoulder pass from Callum Crawford with 2.7 seconds remaining in regulation to complete a hat trick and force overtime.

The Riptide won the faceoff to start OT but couldn’t cash in a lengthy possession, which produced multiple shots on goal.

“I thought the group did a great job, but at the end of the day we came here to win,” said the 37-year-old Crawford, a four-time NLL All-Pro who led the league in scoring last season with 76 points (33 goals, 43 assists) in 11 games for New England and signed with the Riptide as a free agent during the summer of 2020. “There are many positives we can take away,” he added. “There’s a lot to be excited about and look forward to.”

Teat lived up to all the preseason hype in his first NLL game. The No. 1 overall pick of the 2020 Entry Draft finished with a hat trick plus two assists. The 24-year-old forward, a four-time Inside Lacrosse Media All-American from Cornell, racked up 268 career points with the Big Red to rank third on the program’s all-time scoring list.

“It was a lot of fun,” said Teat, who scored with 1:24 remaining to get the Riptide within 12-11. “It’s definitely a different game from Junior or Summer ball; field lacrosse,” he added. “Lots of ups and downs, and faster, and also TV timeouts that take away momentum. I have to get acclimated to that as quick as possible and go from there.”

Another major addition for Ladouceur’s roster was faceoff specialist Jay Thorimbert (64 of 133 — 48 percent — in six games plus 36 ground balls for Rochester last season), acquired along with defenseman Darryl Robertson in a trade with the Knighthawks. In his New York debut, Thorimbert thrived by winning 15 of 28 draws.

The Riptide, which completed its pandemic-shortened inaugural season in last place with a record of 1-13, brought back only seven players to the roster led by 2019-20 NLL Rookie of the Year Tyson Gibson, who led it in scoring with 16 goals and 27 assists.

Gibson scored late in the first half of Saturday’s opener. New York’s second-leading returning scorer, Dan Lomas (21 goals, 21 assists), is out indefinitely with an injury but could return sometime in February.

The Riptide plays two games in a three-day span beginning Friday night at Philadelphia at 7:30 p.m.. It returns to the Coliseum to host Georgia on Sunday at 3 p.m.