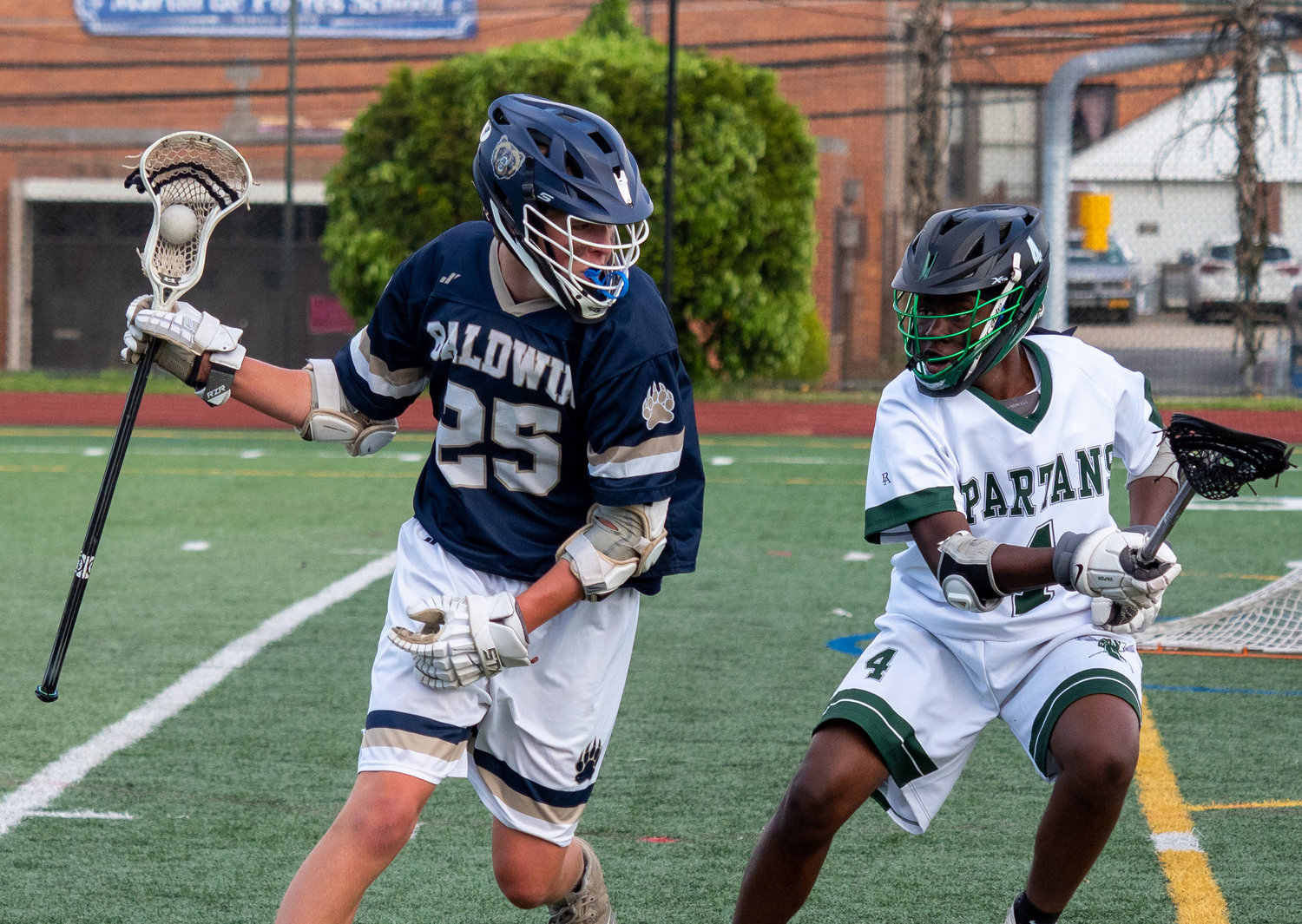 Sophomore Brady Mahler, left, and the Bruins compiled a 9-6 regular-season record and qualified for the Nassau Class B playoffs.
Eric Dunetz/Herald
By Brian Kacharaba

“I think we overachieved.”
That was the sentiment of Baldwin boys’ lacrosse coach Tim Clancy after a strong finish to the regular season that resulted in a second straight playoff berth. The Bruins ended this spring with a 9-6 regular season record, one win better than 2021, and a 6-5 mark in Conference B.
Baldwin’s playoff aspirations took a hit after a 15-8 loss to Mepham on May 6 dropped it to 6-6 and 3-5 in the division. The schedule concluded with three straight road games against Great Neck North, a 10-win Glen Cove team and winless Elmont and Clancy knew his team was at a crossroads.
“Our intention this whole season was we’re making the playoffs and nothing shy,” he said. “We got to that point where we have to win out, so we basically have to treat each of these next games like playoff games.”
Baldwin got by North 12-4 on May 11 behind three goals by sophomore Brady Mahler and six points from senior captain Zach Kirchner. Three days later, it found itself tied with Glen Cove at nine apiece and after three quarters before the Bruins squeaked out an 11-10 victory courtesy of Aaron Bell’s hat trick, including what proved to be the game-winning tally.


Baldwin completed the sweep with a 17-3 victory over Elmont. The season, unfortunately, ended with a 15-2 loss to Carey in the first round of the playoffs last Friday, but Clancy said he couldn’t complain at all about his team’s season.
“For us to come out, win nine games in Nassau County and make the playoffs, [I’m happy with it],” Clancy said. “I made it very clear to these kids [after] this last playoff game, you went up against one of the best teams around, you gave them everything you had, you can’t feel bad about it. We had a lot of kids accomplish a lot of great things.”
Despite an injury scare earlier in the season, Kirchner led the team in goals (31) and points (53) and was just as good on ground balls. He was one of two Bruins named All-County honorable mention.
“Zach had a great season,” Clancy said. “He just had a complete year. He dislocated his kneecap in one of the games earlier and we thought we were going to lose him. But he toughed it out for the rest of the year and didn’t miss a single game.”
Mahler had 23 goals and headed a strong sophomore class that also includes middies Tyler McTaggart (19 goals), Aaron Bell (10) and Logan Kirchner (9), attackman Jake Davidson and defenseman-long pole middie Borago Arlin. Another sophomore, Paul Clement, was called up from JV and scored in the playoff game.
The defense corps also shined in senior captain Zavier Foster, who often covered the opposition’s best player, and Christian and Aaron Nieves. Elijah Bell, the team’s other honorable mention, showed “fearless” tenacity in net and had around 150 saves, including two from point-blank range in the fourth quarter that helped preserve the Glen Cove win.