Taking experiential learning to the next level 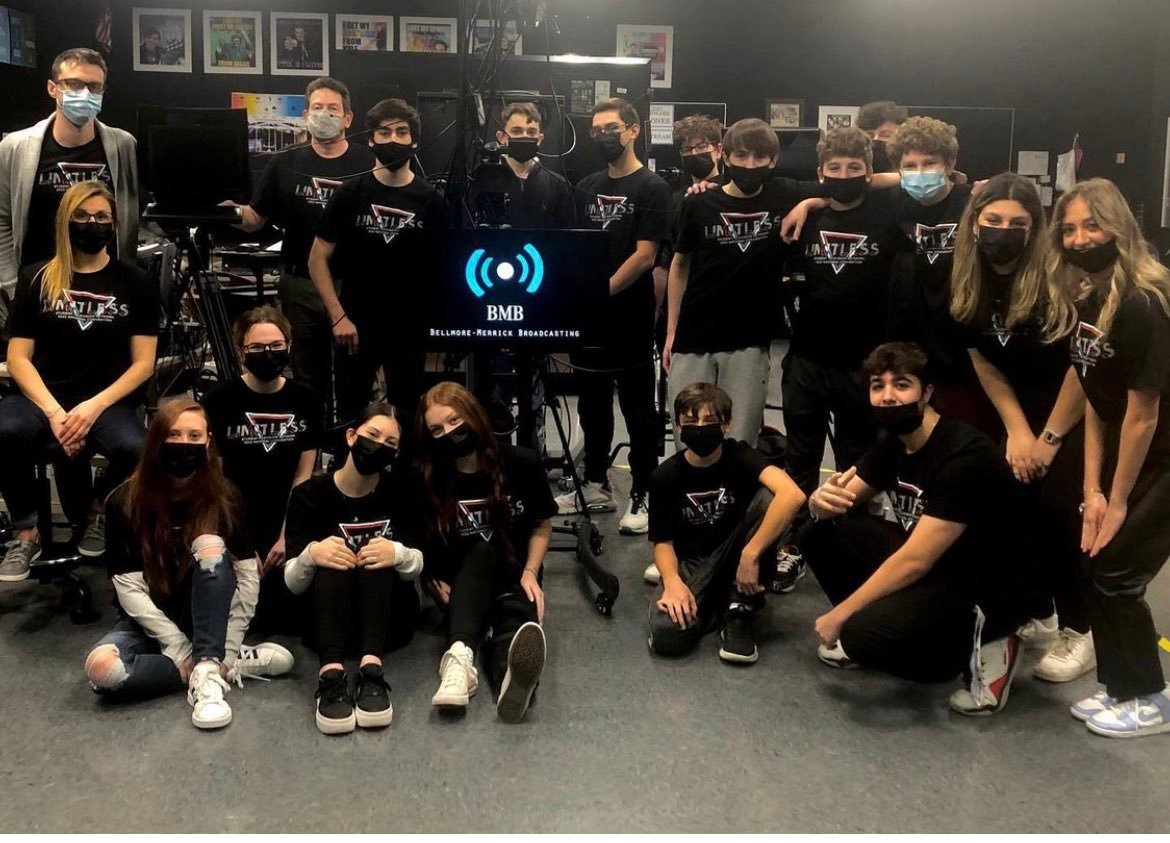 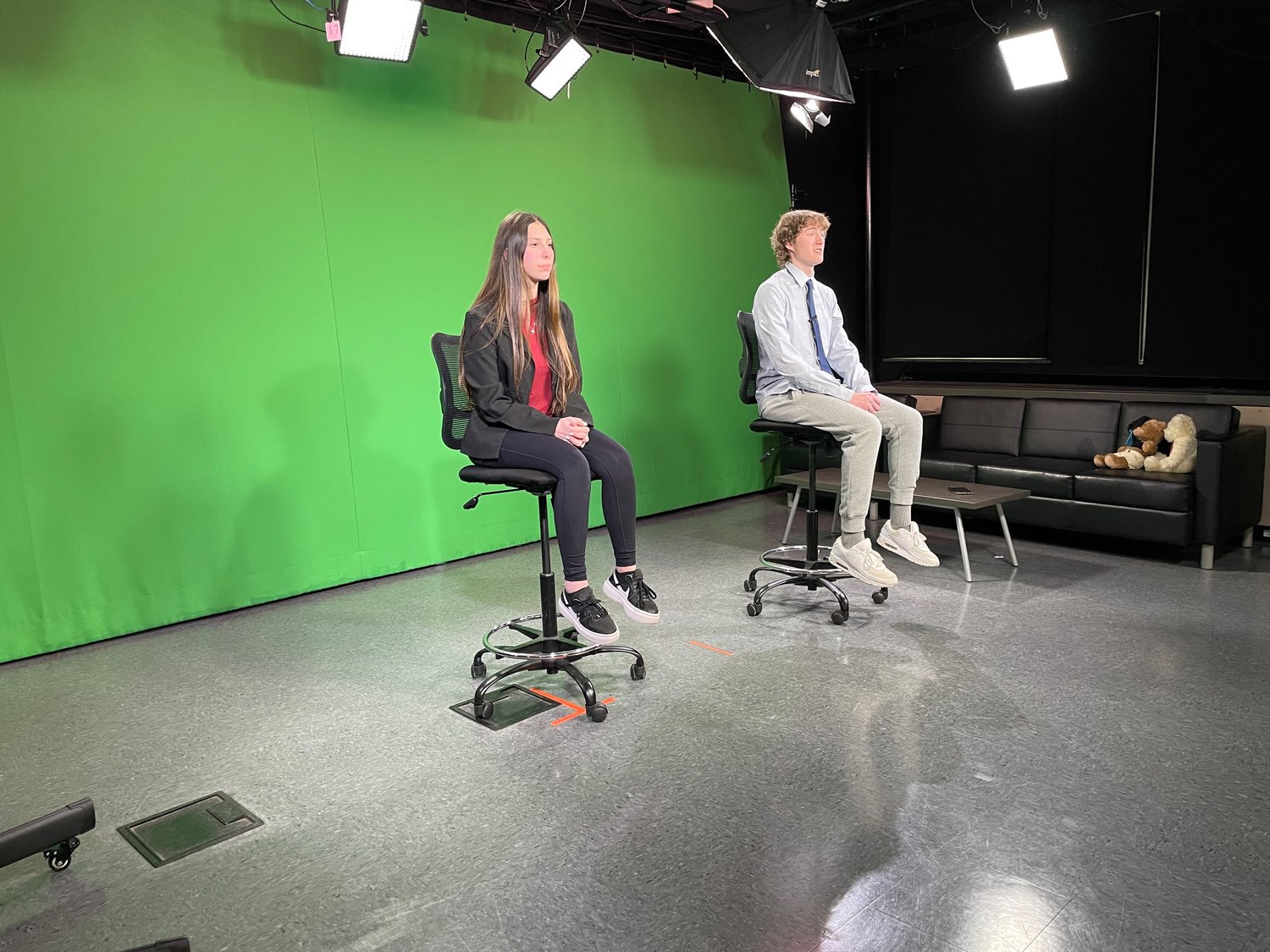 BMB’s classroom is nothing like a normal one: Students work in a fully functioning studio. Juniors Hannah Broxmeyer and Sean McQuillan prepared to anchor BMB’s morning announcements.
Jordan Vallone/Herald
Previous Next
By Jordan Vallone

In the Bellmore-Merrick Central High School district, there is an ever-present emphasis on experiential learning. And at Wellington C. Mepham High School in Bellmore, home of the Bellmore-Merrick Broadcasting program, students can learn all the tricks of broadcast journalism, working hands-on in a studio, starting as early as their freshman year. Recently named a 2021-2022 Broadcast Excellence Award winner by the Student Television Network, BMB prepares aspiring broadcasters for college and beyond.

One of the program’s instructors, Stuart Stein, told the Herald that students in the program can work as news directors, sports directors and anchors, among many other roles. They learn how to write scripts, conduct interviews, create graphics and audio, and work professionally in the field. The actual classroom students learn in is set up very much like a real newsroom — there’s a control room, as well as a set with a green screen, lighting, cameras and props.

When the coronavirus pandemic began two years ago, it slowed some of the program’s operations, Stein explained. “The goal is eventually, every single thing that we produce is student produced, and the adults are kind of just executive producers overseeing what the kids are doing,” Stein said of the program post-Covid.

In the Central District, the three high schools are known for the specialty programs they offer. There’s a culinary arts program at John F. Kennedy High School, and an almost 50-year-old drama program at Sanford H. Calhoun High School. When students are in eighth grade, they can apply to specialty programs like BMB. Even though it is housed at Mepham, students zoned for Kennedy or Calhoun can apply. If accepted into the program, they become full-time Mepham students, and the classes they take for BMB are worked into their daily schedule.

Currently, there are 80 students in the program. They take one broadcasting class each year and one graphics and audio class their sophomore year. Stein noted that students must also complete 25 hours of studio time each quarter. Most put in a lot more time, he added, with the current junior class averaging about 63 studio hours per quarter.

“They’re basically here every single off period they have — not because we make them, because they want to be,” Stein said.

Mepham students are likely most familiar with BMB’s morning announcements, which are recorded every Thursday, and air Fridays throughout the school. BMB also produces a midweek update, which Stein said is its “most critically acclaimed show.” It also covers sporting events live, as well as drama and music productions, and other activities around the school. “In addition to the daily [and] weekly shows, we cover about 40 events a year,” Stein said.

A senior in the program, Emily Yucht, 18, said that BMB has helped her prepare for what’s ahead. “I started from the bottom here and worked my way up,” she said.

Attending American University next year and planning to major in broadcasting, Yucht is the news director for BMB and the producer of its morning announcements. “I know that I’m going to start at the bottom of the barrel and work my way up — and I think this has really prepared me for that,” she said of BMB.

Stein teaches the program alongside Lisa Kalish and Matt Russell. Russell has a technology background, while Kalish is an art teacher who also teaches a studio art class when she’s not working with BMB.

“This room is just always filled with kids who are passionate — they want to be here,” Kalish said. “Once the [school] day ends, it just becomes a work atmosphere in here, and no one seems to mind we’re still here working. We’re far enough into the program that it’s very student-run.”

Everything BMB produces is on its YouTube channel, BMBroadcasting. To view its submission for the Student Television Network Excellence Award — the most prestigious award offered by STN to broadcast journalism programs — go to www.studenttelevision.com.

Yucht added the bond that the she and fellow students have created with their teachers is what keeps the program strong. “Nobody that I know who has graduated — nobody that I know in the program — would be where they are without them,” she said of Stein, Russell and Kalish. “Their guidance, their help — they’re like a cool uncle.

“When you’re on your off period, you could go out with your friends, but people come and stop by here to hang out with them and get work done,” Yucht added. “That is a part of why this program works so well — we have this community, but the community started because of them.”